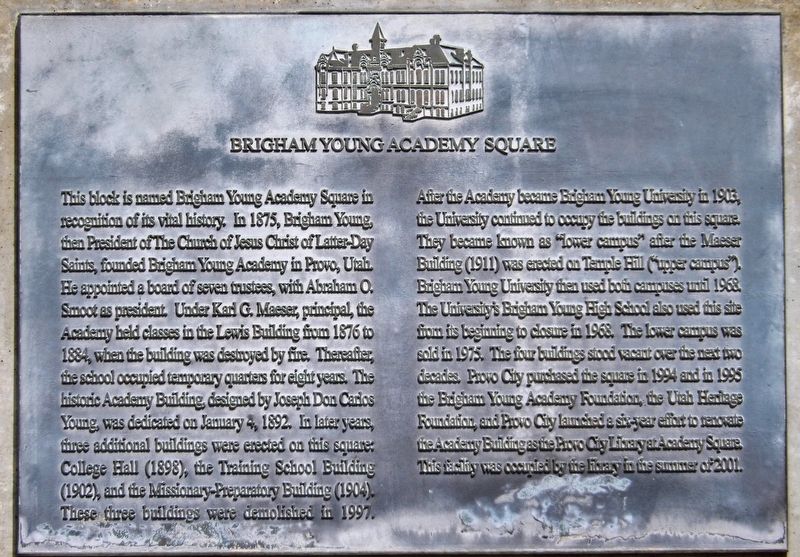 This block is named Brigham Young Academy Square in recognition of its vital history. In 1875, Brigham Young, then President of The Church of Jesus Christ of Latter-Day Saints, founded Brigham Young Academy in Provo, Utah. He appointed a board of seven trustees, with Abraham O. Smoot as president. Under Karl G. Maeser, principal, the Academy held classes in the Lewis Building from 1876 to 1884, when the building was destroyed by fire. Thereafter, the school occupied temporary quarters for eight years. The historic Academy Building, designed by Joseph Don Carlos Young, was dedicated on January 4, 1892. In later years, three additional buildings were erected on this square: College Hall (1898), the Training School Building (1902), and the Missionary-Preparatory Building (1904). These three buildings were demolished in 1997. 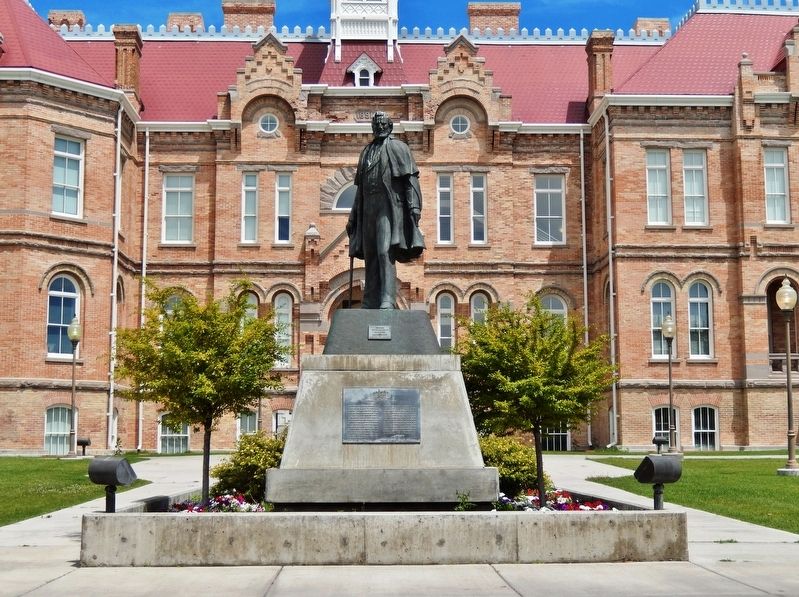 Click or scan to see
this page online
1968. The University’s Brigham Young High School also used this site from its beginning to closure in 1968. The lower campus was sold in 1975. The four buildings stood vacant over the next two decades. Provo City purchased the square in 1994 and in 1995 the Brigham Young Academy Foundation, the Utah Heritage Foundation, and Provo City launched a six-year effort to renovate the Academy Building as the Provo City Library at Academy Square. This facility was occupied by the library in the summer of 2001.

Topics. This historical marker is listed in these topic lists: Churches & Religion • Education. A significant historical year for this entry is 1875.

Location. 40° 14.464′ N, 111° 39.501′ W. Marker is in Provo, Utah, in Utah County. Marker is on North University Avenue (U.S. 189) north of East 500 North, on the right when traveling north. Marker and statue are located on the sidewalk, directly in front of the Provo City Library at Academy Square. Touch for map. Marker is at or near this postal address: 550 North University Avenue, Provo UT 84601, United States of America. Touch for directions. 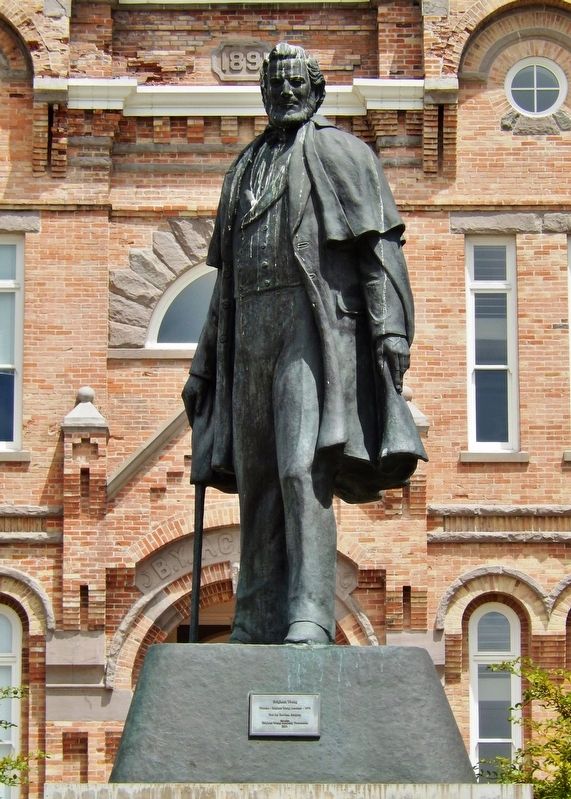 Also see . . .
1. Provo City Library at Academy Square Library and Building History. The Brigham Young Academy building opened its doors in 1892. One of the largest school buildings in the Rocky Mountain region at the time, the Academy could accommodate 1,000 students. Located at the northern edge of the city, the large building was constructed of locally manufactured brick trimmed with sandstone and wood. The roof was composed of metal shingles. Electricity generated from A.O. Smoot's sawmill two blocks to the west provided for electric lights in the building. Heating for a portion of the building was accomplished by forced air over steam radiators; the remaining rooms were heated by coal. (Submitted on March 17, 2020, by Cosmos Mariner of Cape Canaveral, Florida.)

2. Brigham Young Statue On Provo's Academy Square. The statue was donated to Provo City government for the Academy Square by the Brigham 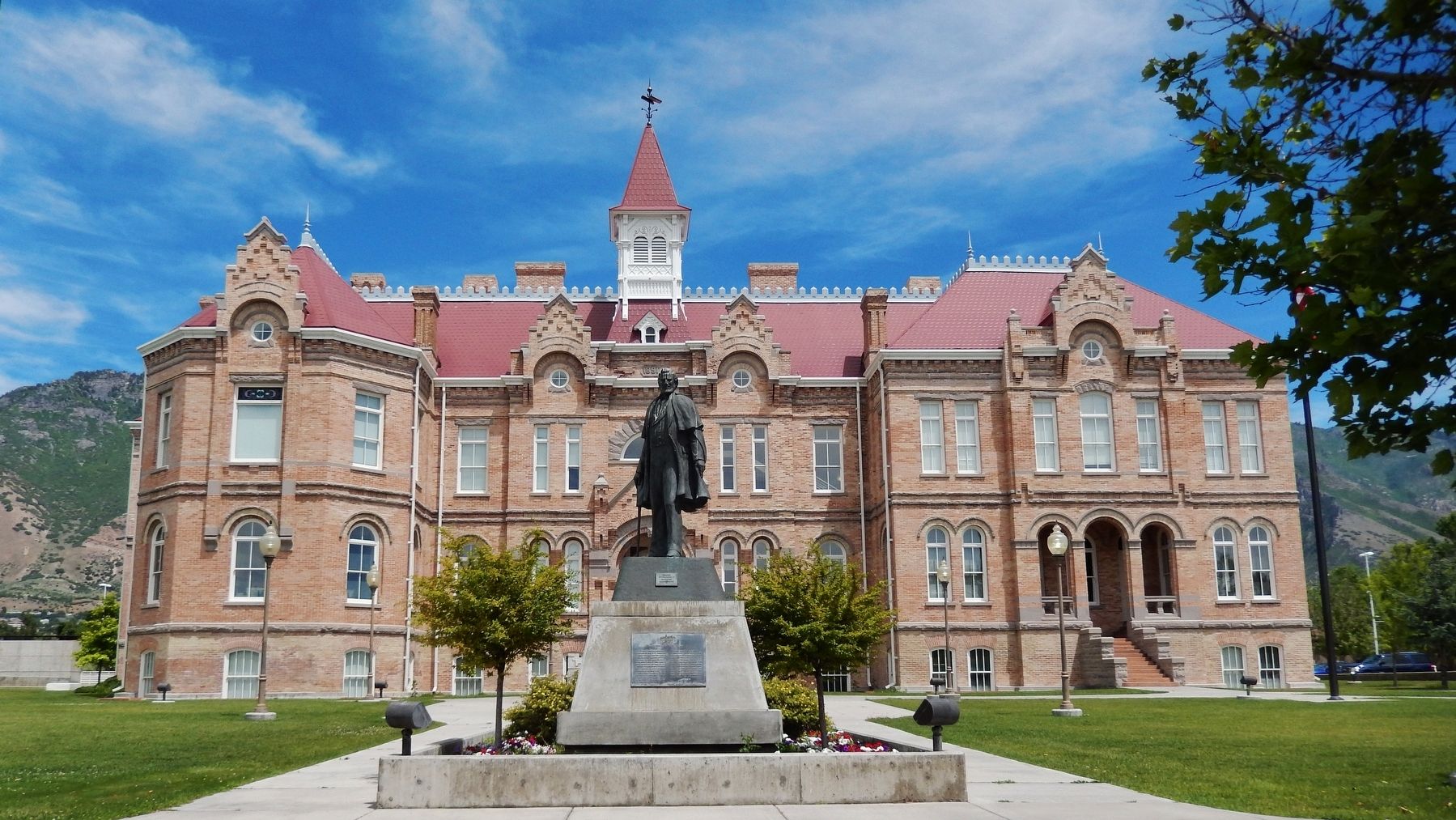