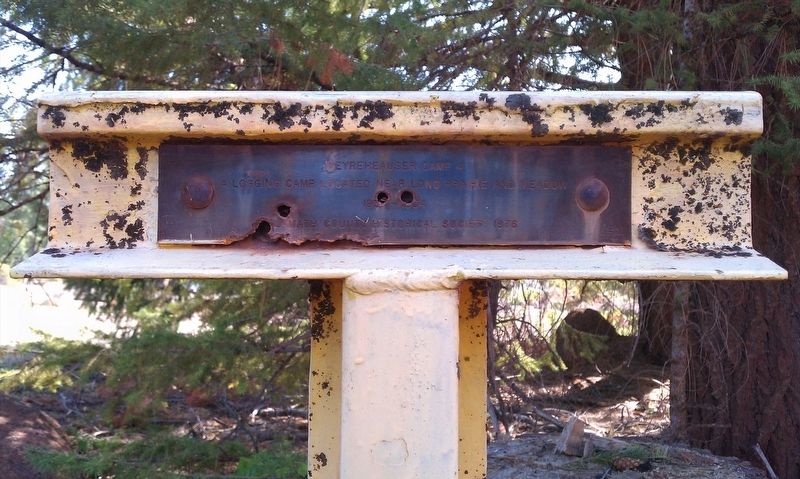 Topics. This historical marker is listed in these topic lists: Horticulture & Forestry • Industry & Commerce. A significant historical year for this entry is 1934.

Regarding Weyerhaeuser Camp 4. The following is taken from 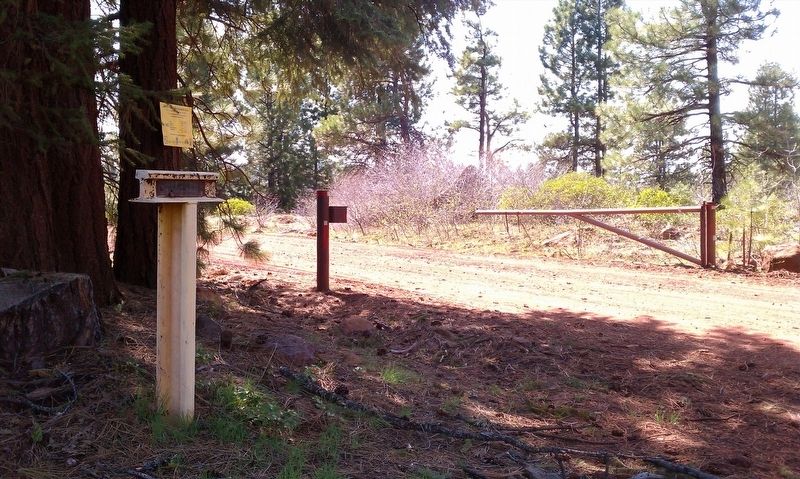 Photographed By Douglass Halvorsen, April 29, 2012
2. Weyerhaeuser Camp 4 Marker
View of marker looking south along a dirt road leading to the former Camp 4 logging site. This road to the site is seasonal.

Click or scan to see
this page online
Stephen Beckham's Historical landscape overview of the upper Klamath River Canyon of Oregon and California (link below) to describe Weyerhaeuser Company and its interest in this area and it reads:

Weyerhaeuser Timber Company's Logging Railroad
The Weyerhaeuser Timber Company began purchases of timberlands in Klamath County in the first decade of the twentieth century. In 1905 it bought out the Pokegama Sugar Pine Company, owner of the Klamath Lake Railroad. By the end of the year its holdings in the Klamath Basin were approximately 158,000 acres with nearly a like amount in Lake County to the east. Weyerhaeuser deferred development of its timberlands for a number of years. Finally, in 1923-24 the company purchased lands for a sawmill site and production facilities six miles south of Klamath Falls. In 1928, when the Great Northern announced it would extend its line south from Bend to Klamath Falls, Weyerhaeuser would construct its mill. With transportation links both north and south, the company was ready to ship forest products in a competitive market.

To tap its great "West Block" of timber-holdings lying west of Klamath Falls and north of the Klamath River-the company began a program of constructing logging camps and railroads. First came Camp 2, a staging area west of Keno and southeast of Oatman Lake. In time the company erected Camp 3, a 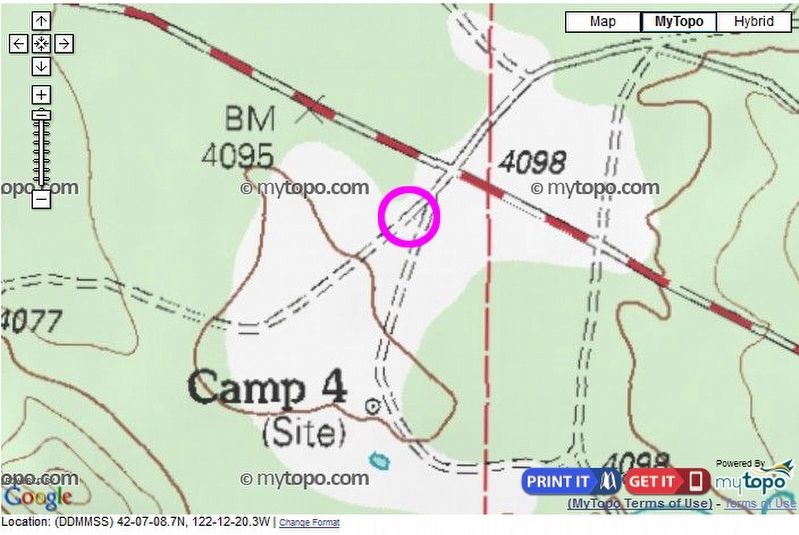 Photographed By Douglass Halvorsen
3. Topography map
This topography map shows the former Camp 4 site. The pink circle is where the historical marker is located. Nothing of the former logging camp remains except some concrete footings and some wood paneling here and there. There are also a couple of abandoned water/fuel tanks that probably belonged to the mill at one time.
site a short distance northwest of Hayden Mountain. And finally it erected Camp 4, a site approximately twelve miles east of Parker Mountain and a short distance south of Highway 66. By 1929 the company had nineteen miles of railroad. The line ran southwest from the sawmill to Keno, wended its way along the north edge of the Klamath River Canyon, and fanned out with lines headed toward Round Lake, Aspen Lake, and Buck Lake. In the Spencer Creek watershed a branch line turned southwest to cross the Pokegama Plateau to Camps 3 and 4, with a maze of feeder lines encircling Mule Hill, Parker Mountain, and Grizzly Mountain. To the west the railroad crossed into eastern Jackson County. Log hauling commenced to the not-yetfinished sawmill in February, 1929.

The quality of construction of the line suggested to some that there was a hidden agendathe railroad would continue west to Butte Falls and join the Southern Pacific in the Rogue River Valley. The suspicions proved unfounded.

The Weyerhaeuser railroad was built to achieve efficiency in movement of log hauling. Workers laid lateral spurs from the mainline at approximately 3,000-foot intervals. This tactic meant that log skidding seldom exceeded 1,500 feet. The program meant, however, that over several years the company laced the Pokegama region with hundreds of miles of spur track that it laid down and then took up. The main line into the West Block ran for thirty-nine miles into eastern Jackson County. Weyerhaeuser operated the system for twenty-eight years. Finally, in 1956, sensing that the timber was largely cut and that truck hauling would be more efficient, the company abandoned the railroad and began its removal.

Additional commentary.
1. My birthplace
My grandfather Roy Edwin Herrick was the Railroad Engineer for the Weyerhaeuser Logging Company. Dates are approximate, in the late 1920s to approximately 1940. During the summer months he had built a wooden frame to put a tent, so his family could live near him in the summer months. Family members (first names by age: Mae;Edith; Roy Jr.; Fred; Myrtle; Lyle, born twins girl died at birth. Three children by his wife, from former husband, Stanley; Martha (my mother) and George Cory.
This tent was located several yards from the front of the roundhouse.
On the late night of July, 19, 1932, while my mother and her husband Clarence V. MCGee, were visiting, she began my birth which was anything but normal. Unable to complete the birth, my father was sent to Keno to bring the doctor. After complication I enter the world successfully. Later came my sister Dorothy and a brother Fred. Camp 4 was in my memories a beautiful place
Most of the Herrick Family are interred in the Keno Graveyard. Note To Editor only visible by Contributor and editor
— Submitted August 12, 2018, by Ralph Gordon McGee of Vancouver, Washington.
Credits. This page was last revised on April 5, 2020. It was originally submitted on December 8, 2016, by Douglass Halvorsen of Klamath Falls, Oregon. This page has been viewed 854 times since then and 182 times this year. Last updated on April 4, 2020, by Douglass Halvorsen of Klamath Falls, Oregon. Photos:   1, 2, 3. submitted on December 8, 2016, by Douglass Halvorsen of Klamath Falls, Oregon. • Syd Whittle was the editor who published this page.
Share this page.