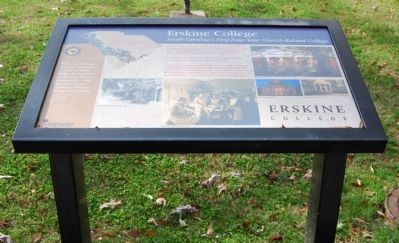 Photographed By Brian Scott, December 23, 2008
1. Erskine College Marker
Inscription.
Erskine College. South Carolina's First Four-Year Church-Related College. , Erskine College was founded in 1839 by the Associate Reformed Presbyterian Church as South Carolina's first four-year church-related college. The college grew out of an academy for men established in 1835 and seminary founded two years later at Due West. , In 1859 Due West Woman's College was founded and continued for 70 years until it was merged with Erskine in 1929. , Today Erskine's academic excellence as a liberal arts college continues with consistent ranking among the country's best small colleges. The campus, which is dominated by ancient oaks, is a blend of nineteenth and twentieth century architecture. The cultural center of the school is the modern Bowie Arts Center with its permanent and changing galleries. . This historical marker was erected by South Carolina Heritage Corridor. It is in Due West in Abbeville County South Carolina

Erskine College was founded in 1839 by the Associate Reformed Presbyterian Church as South Carolina's first four-year church-related college. The college grew out of an academy for men established in 1835 and seminary founded two years later at Due West.

In 1859 Due West Woman's College was founded and continued for 70 years until it was merged with Erskine in 1929.

Today Erskine's academic excellence as a liberal arts college continues with consistent ranking among the country's best small colleges. The campus, which is dominated by ancient oaks, is a blend of nineteenth and twentieth century architecture. The cultural center of the school is the modern Bowie Arts Center with its permanent and changing galleries.

Topics and series. This historical marker is listed in these topic lists: Churches & Religion • Education. In addition, it is included in the South Carolina Heritage Corridor series list. A significant historical year for this entry is 1839. 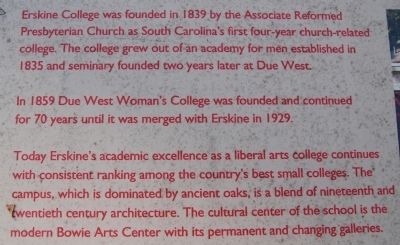 Click or scan to see
this page online
W. Marker is in Due West, South Carolina, in Abbeville County. Marker is on Depot Street. Marker is located northwest of the intersection of Depot and South Main Streets. Touch for map. Marker is in this post office area: Due West SC 29639, United States of America. Touch for directions.

Also see . . .
1. Erskine College. A Christian liberal arts college which is a part of the Associate Reformed Presbyterian tradition. (Submitted on December 28, 2008, by Brian Scott of Anderson, South Carolina.) 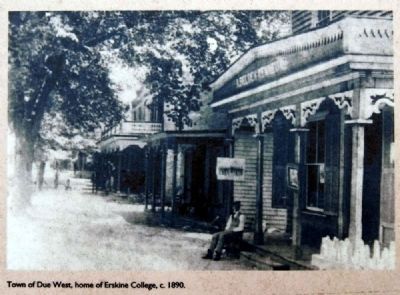 Photographed By Brian Scott, November 2, 2010
3. Town of Due West, Home of Erskine College, c. 1890
located in the small town of Due West in Abbeville County, South Carolina, consists of eighty-eight properties, which as a unit illustrate the development of the village and Erskine College from ca. 1840 to 1930. (Submitted on December 28, 2008, by Brian Scott of Anderson, South Carolina.)

Additional commentary.
1. Erskine College / Due West Historic District
The Erskine College/Due West Historic District contains fourteen properties of particular architectural or historical significance and seventy-four supporting properties. The district is located in the small town of Due West in Abbeville County, South Carolina, and centers around the Erskine College campus. About one-third of the buildings within the district boundaries are associated with the college. Many of the other buildings, located in the adjacent residential and commercial areas, are or were owned by persons connected with the college. The majority of the buildings were constructed between ca. 1840 and 1930 and reveal an evolution of architecture from the early years of the area's settlement to the early twentieth century. Many of the buildings constructed within the past fifty years, although not considered contributing properties at this time, blend in well with the older buildings 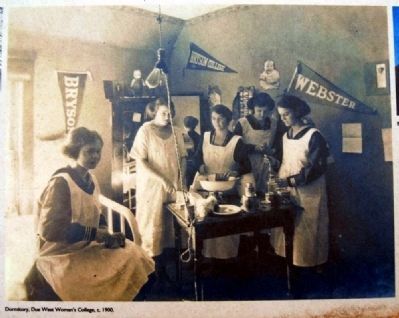 Photographed By Brian Scott, November 2, 2010
4. Dormitory, Due West Woman's College, c. 1900
and are not considered to be intrusions to the district. Most of the buildings in the district have been continuously used and have been kept in good repair.

Significance: The Erskine College/Due West Historic District, located in the small town of Due West in Abbeville County, South Carolina, consists of eighty-eight properties which as a unit illustrate the development of the village and Erskine College from ca. 1840 to the present. included in the district are portions of the campus of Erskine College, the first four-year denominational college in South Carolina, which was founded in 1839 by the Synod of the Associate Reformed Presbyterian Church, and the Due West Associate Reformed Presbyterian Church, whose early congregation played a large role in the formation of the village and college. Also included in the district are a residential section, containing many properties either at one time or presently associated with the college, and the commercial area. The varied architecture of these areas dates from ca. 1840 to ca. 1941 and illustrates the growth of the town. Modern Due West is dependent on the college for its continued existence and as such life in the village revolves around Erskine.

Additional Information: The origin of the name Due West is unknown but it is probably that it is a corruption of the earlier names for the area: Dewises 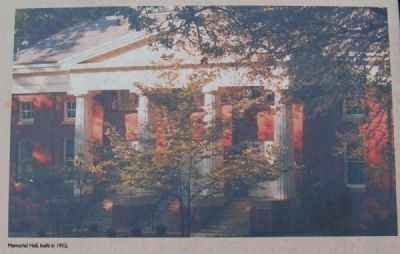 Photographed By Brian Scott, November 2, 2010
5. Memorial Hall, built in 1912
Corner, Devises Corner, Jewett's Corner, Dewitt's Corner, and Duet's Corner. The village took Due west from the Associate reformed Presbyterian Church of that name which had moved from Duet's Corner to a more central location in the present village by 1790. in 1846 the town was incorporated under the name Selma. But the name Due West had been associated with the settlement for so long that in 1856 the charter was revised and the name changed to Due West. Due West had a thriving business community in the late 1800s and early 1900s; however, the mobility of the twentieth century has resulted in the centralization of businesses in larger towns and cities nearby. Due West today has only a few commercial enterprises which offer basic necessities. It is very clear that the major employer and influence on the town of Due west is its college.

In 1836 the Synod of the ARP Church established a two-year classical academy at Due west and in 1839 expanded the school into a four-year college. Shortly after the founding of the academy the Synod established a theological seminary as well, named Clark and Erskine Seminary. The two schools, closely associated since their foundings, have been known as Erskine College and Erskine Seminary since about 1842.

In 1852 a group of ARP ministers and laymen founded the Due West Female College, later the Due West Woman's college. Privately 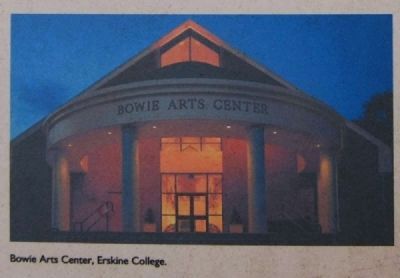 Photographed By Brian Scott, November 2, 2010
6. Bowie Arts Center, Erskine College
operated until 1904, the college came under the control of the ARP church from that year until it merged with Erskine in 1927.

23. Euphemian Literary Society Hall, Erskine College Quadrangle (1912): One-story, brick building on a raised foundation. Built in Neoclassical design. It features a large central pedimented portico supported by four fluted wooden ionic columns. The central double doors have an arched fanlight. the interior features a central meeting hall with sloping floor, high ceiling, and tall fluted pilasters. A marble podium from an earlier (1858) building is still in use. H.J. Burdette was the contractor for this building. 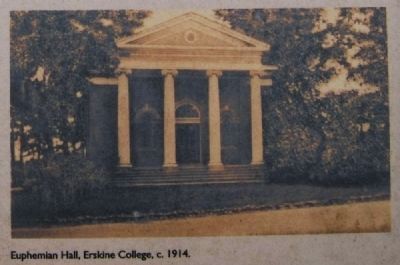 Photographed By Brian Scott, November 2, 2010
7. Euphemian Hall, Erskine College, c. 1914
The northeast wall incorporates a section of a wall of the original building (1842) which burned in 1892.

26. Philomathean Literary Society Hall, Erskine College Quadrangle (1859): Two-story stuccoed building in the Italian Renaissance Revival Style. Thomas Veal of Columbia, S.C., was the architect for the building. Facade features a central pedimented pavilion with paired Corinthian pilasters at either side of a Palladian window. Single doorways, with round-headed windows above, are at either end of the central pavilion; colossal Corinthian pilasters are located at the corners of the building. Recessed balustrades are used for decoration.

29. Galloway House, West Main Street at Depot (1897): Two-story Victorian, weatherboarded house. Multiple gables feature decorative bargeboards. Front door is heavily carved and has multi-paned stained glass window. The interior of the house contains the original mantels, molding, wainscoting and decorative details. The rear ell and a shed in the backyard were parts of an early house. The Galloway family was prominent in the development of Due West, Due West Woman's College, and the Associated Reformed Presbyterian Church. 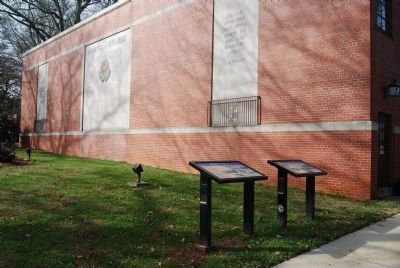 Photographed By Brian Scott, December 23, 2008
8. Abbeville County (left) and
Erskine College (right) Markers
The building behind the markers is the McCain Library (1949, 1973).
by four granite Tuscan columns. Central islet steeple is square and had dentil course, louvers, balustrade, pilasters, and dome with an octagonal base.

35. Brownlee-Kennedy House, Church Street (ca. 1800): Two-story, rectangular, weatherboarded house with gable roof. Recessed, two-story porch is supported by six stuccoed pillars. Central single doorway has sidelights with a decorative surround and corner blocks. second story has a central, single entrance doorway with sidelights opening on to a small cantilever balcony with a decorative railing, modeled after the "Lindsay style." This house is believed to have been extensively altered in the mid 1800s giving it the style that it has today.

52. Lindsay-Bell House, Abbeville Street (ca. 1845-1850): Two-story, square, weatherboarded residence built in the late 1840s by James Lindsay for his son. This house is 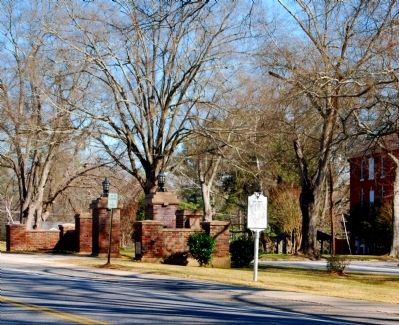 Photographed By Brian Scott, January 17, 2009
9. Erskine College Entrance -
Across from Due West ARP Church
Due West Historical Marker Center
the last of many houses known to have been built by James Lindsay, although other display the same style. The entrance was a wide, central, single door, mullioned sidelights, transom and fluted trim with corner blocks in a bill's-eye design. Second story has a balcony with decorative railing supported by curved wooden braces. The single doorway had sidelights and fluted trim with plain corner blocks. There are four stuccoed end chimneys.

52a. Student Cabin: Used ca. 1850-1890 as a dormitory. One-story, single room, rectangular building with a gable roof and one exterior end chimney. This is the last remaining of many student cabins which were used before the first dormitory was built. It was restored in the early 1970s and is presently used as a museum. 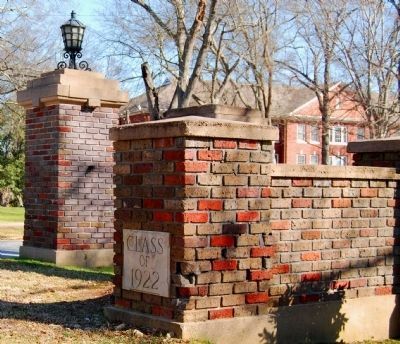 Photographed By Brian Scott, January 17, 2009
10. Erskine College Entrance -
Across from Due West ARP Church
Erected by the Class of 1922
features triglyphs, metopes, and guttae. The central pavilion has three sets of double doors. The interior contains an auditorium with sloping roof and decorative ceiling. 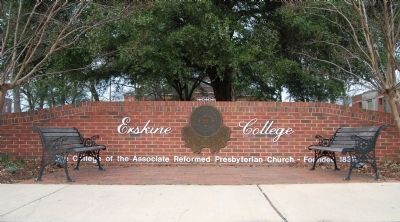 9. The Andrew May House, West Main Street (1908): Two-story rectangular house with asbestos shingle siding. Central portico has gabled roof with boxed cornice and returns and is supported by four posts with turned balustrade. The house was built in 1908 by Andrew May. 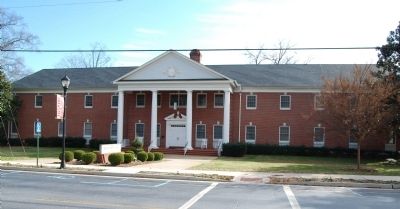 16. Due West Railroad Depot, Depot Street at Bamboolevard: One-story, rectangular building with gabled roof and two four-paneled doorways in gable end facade. Shed roof across facade is supported by plain wooden graces. Fenestration (two-over-two) varies to each side. Building is currently used for storage. Andrew May from Donalds, South Carolina, built the depot in 1907-1908. 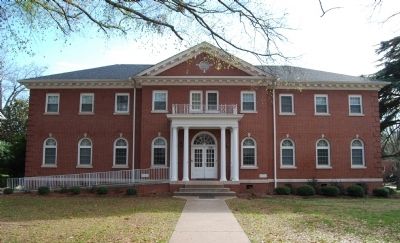 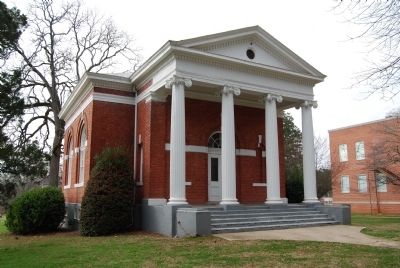 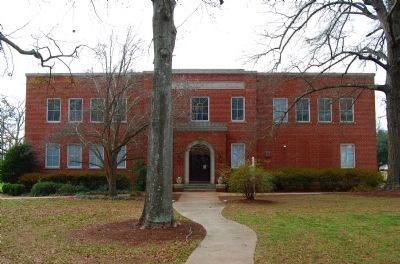 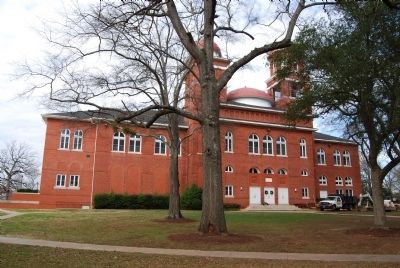 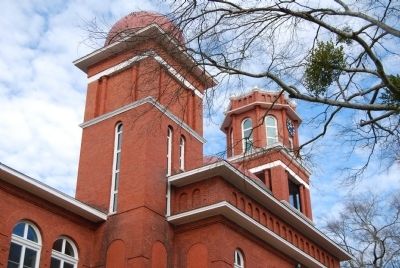 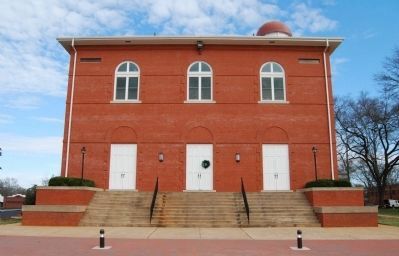 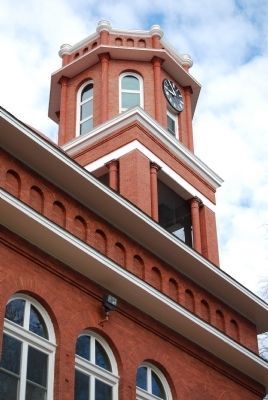 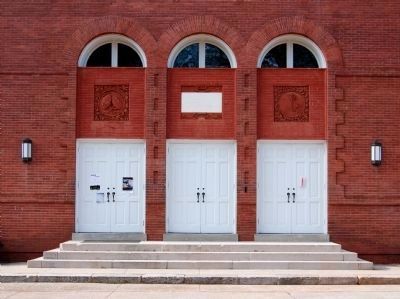 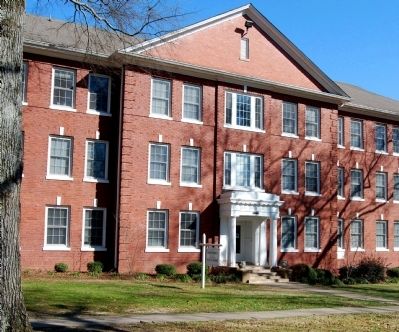 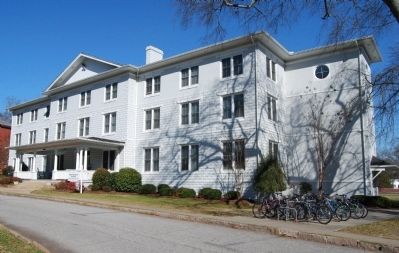 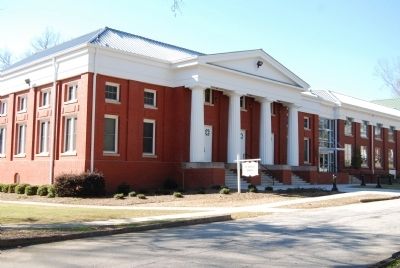 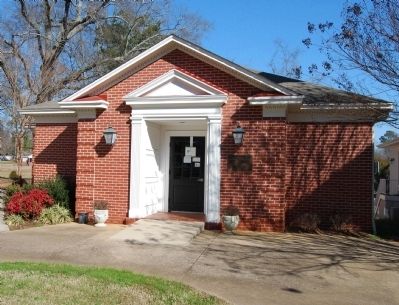 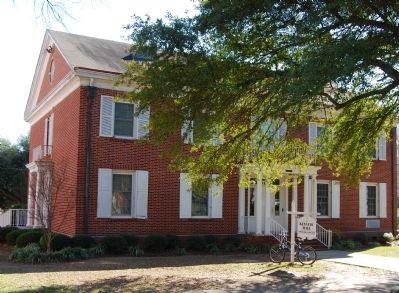 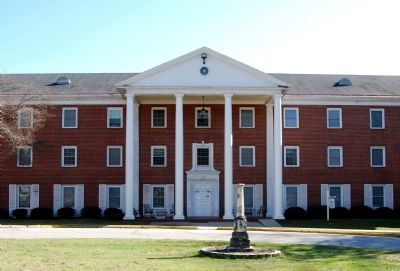 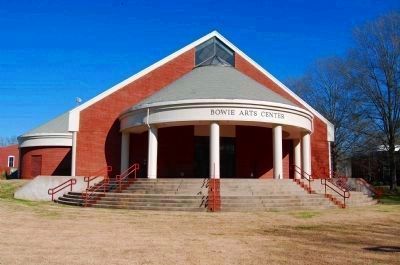 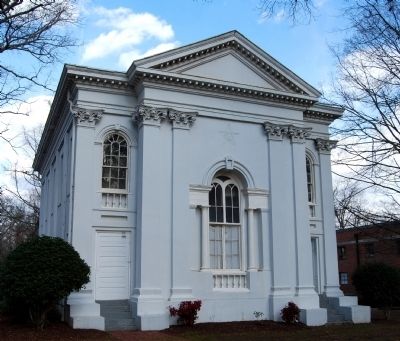