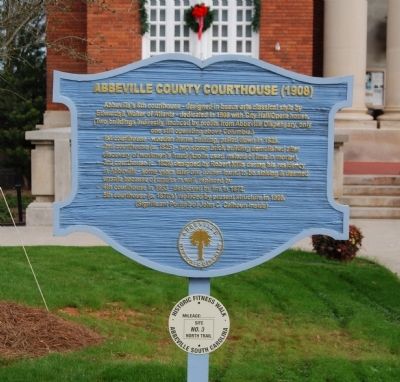 • 3rd Courthouse (c. 1829) designed by Robert Mills during his residency in Abbeville - some years later one corner found to be sinking & deemed unsafe because of cracks in wall, replaced by

Topics and series. This historical marker is listed in this topic list: Architecture. In addition, 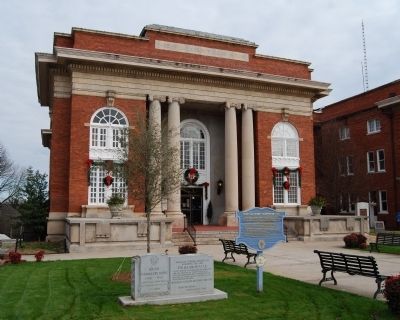 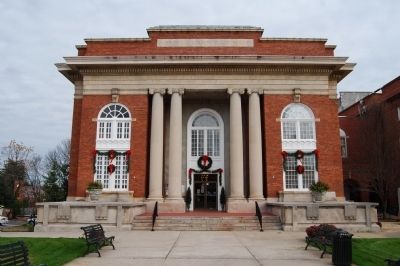 Related markers. Click here for a list of markers that are related to this marker. Courthouses in South Carolina designed by William Augustus Edwards

Also see . . .
1. Abbeville County Courthouse. Constructed in 1908 to replace an earlier courthouse destroyed by fire, the Abbeville County Courthouse is one of six existing courthouses in South Carolina designed by Darlington native William Augustus Edwards of the Atlanta firm of Edwards and Walter. (Submitted on December 30, 2008, by Brian Scott of Anderson, South Carolina.) 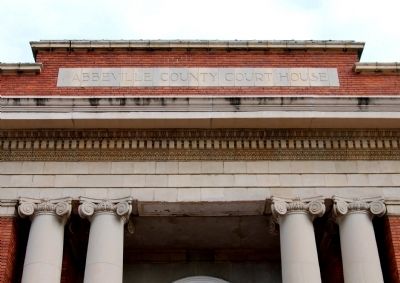 4. Robert Mills. Robert Mills (August 12, 1781 – March 3, 1855) is sometimes called the first native born American to become a professional architect, though Charles Bulfinch perhaps has a clearer claim to this honor. (Submitted on September 2, 2010, by Brian Scott of Anderson, South Carolina.)

5. William Augustus Edwards. William Augustus Edwards, also known as William A. Edwards, (December 8, 1866-March 30, 1939) was an Atlanta-based American architect renowned for the educational buildings, courthouses and other public and private buildings that he designed in Florida, Georgia and his native South Carolina. (Submitted on December 30, 2008, by Brian Scott of Anderson, South Carolina.) 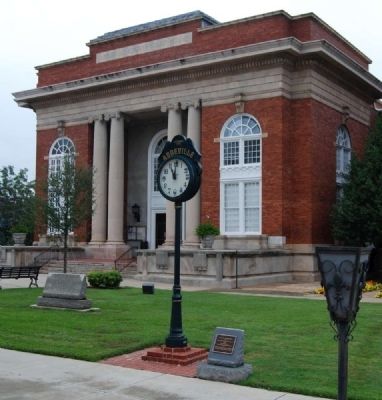 Photographed By Brian Scott, September 27, 2008
5. Abbeville Town Clock -
Inscription Reads
Given in Appreciation
to
the City of Abbeville, S.C.
and
in Memory of
Daughter Dixie Amanda
by
Edith & Jimmy Davis & Family
This Day - December 15, 2000
Abbeville Opera House and historic district, the Burk-Stark Mansion circa 1841, and Erskine College located in the town of Due West. (Submitted on November 21, 2011, by Brian Scott of Anderson, South Carolina.)

The courthouse is a monumental two-story brick building, located on the public square of Abbeville. The facade is characterized by a projecting entrance pavilion with a colossal Ionic portico in antis,of stone construction. The portico has two pair of unfluted stone columns, with Scamozzi capitals, which support a full entablature, composed of an architrave consisting of three fascias; a plain frieze; and a cornice composed of a bead-and-reel astragal, a cyma recta with leaf-and-tongue carving, a dentil course, a bead-and-reel astragal, an egg-and-dart ovolo, a soffit and corona, a cyma reversa, a fillet, and a crowning cyma recta. This entablature is carried around the entire elevation 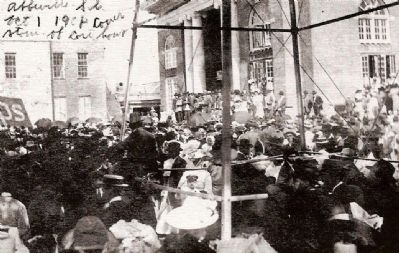 The facade beneath the portico is of brick, laid in American Flemish bond, with raked joints. A wooden arch encompasses both levels of the central bay of the facade; the central entrance on the first floor has new glass doors, while the casement windows of the second story are original. The single bays flanking the entrance pavilion have similar arches encompassing the casement windows of the first and second stories. A broad brick attic story rises above the entablature; this attic story bears a stone course inscribed "ABBEVILLE COUNTY COURT HOUSE."

The right side elevation has a brick arcade, 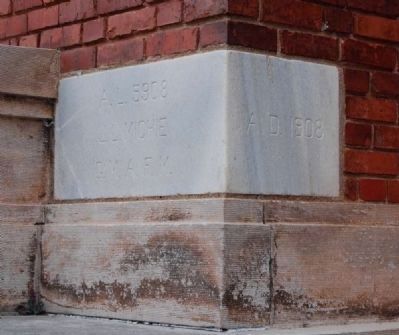 Photographed By Brian Scott, September 10, 2010
7. Abbeville County Courthouse Cornerstone
A.L. 5908
J.L. Michie
G.M.A.F.M.
A.D. 1908
connecting the courthouse to the adjacent opera house and municipal office building, which was designed by Edwards and which uses many of the same compositional elements and details. The junction between the two buildings has been filled with further expansion of the courthouse, on two stories.

The Abbeville County Courthouse has a longitudinal hall, defining its main axis; the county offices are located on either side of this hall. A stair is located at either end of the hall. The front stair has paneled newel posts and a sawn balustrade. A dentil cornice enriches the hallway. The courtroom occupies most of the second story. The three arched windows of the left side elevation are reflected in three blind arches on the right side. Roman Doric pilasters alternate with the arches. A heavy tabernacle frame behind the judge's seat features three stained glass windows; this frame is flanked by pedimented doorways leading from the judge's chambers. The pilasters carry a dentil cornice and the main roof beams; the ceiling itself is acoustical tile. The audience seats are of bent plywood on metal frames.

The courthouse was renovated in 1964 by Lyles, Bissett, Carlisle, and Wolff of Columbia.
— Submitted November 8, 2009, by Brian Scott of Anderson, South Carolina.
2. National 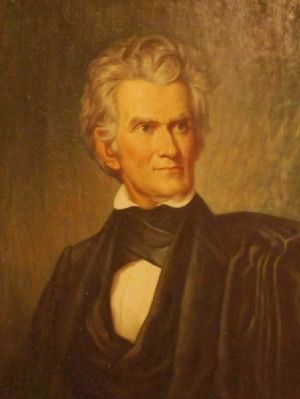 Photographed By Brian Scott, September 10, 2010
8. John C. Calhoun Painting
Located Inside the Courthouse
Register of Historic Places:
Abbeville County Courthouse ** (added 1981 - Building - #81000706)
• Also known as See Also: Abbeville Historic District; Abbeville Historic Dist Court Sq., Abbeville
• Historic Significance: Event, Architecture/Engineering
• Architect, builder, or engineer: Minshall, Frederic; Edwards, William Augustus
• Architectural Style: No Style Listed
• Area of Significance: Architecture, Politics/Government
• Period of Significance: 1900-1924
• Owner: Local Gov't
• Historic Function: Government
• Historic Sub-function: Courthouse
• Current Function: Government
• Current Sub-function: Courthouse
— Submitted January 13, 2011.
3. The Five Abbeville Courthouses
...I will now speak of the public buildings of the place, and first of the Court House. I know of no other person, Elijah Wilson excepted, who can say as I now do, that I have seen five court houses. The first one was a wooden frame building standing a little higher up the public square than the subsequent ones. Of this house, I don't recollect much but a few things are fixed in my memory. I recollect that during a summer there was a school kept by a schoolmarm Maria Neddiman.

When another court house was built the material 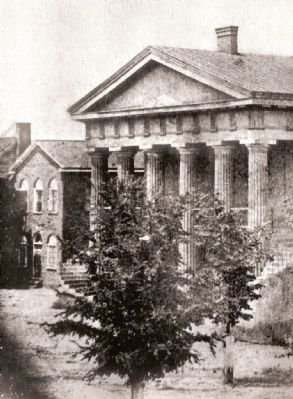 Abbeville County by the Abbeville County Historical Society, circa 1870
9. Abbeville County's Third Courthouse
1829-1853
Said to have been Abbeville's first real courthouse. The building was designed by Robert Mills who was living in Abbeville at the time.
of this wooden house was bought by B.C. Yancey, Esq. and erected into a building on the Blue Hill. It was afterward passed through several hands and was at one time owned and occupied by my teacher, Alpheus Baker.

The second court house was built of brick and was upon the whole a pretty good court house. It would have lasted many years no doubt had the trustees who's superintendence of its construction not been cheated by the contractor. These trustees were men of the place now skilled in architectural knowledge and themselves drafted the plan. When the house had reached the second story window, it became known to them that the workmen instead of using lime mortar according to the contract was using kaolin of which there were several beds in the neighborhood and this substance so nearly resembled line in appearance that the trustees had not detected the fraud played upon them. When they did, they had the wall pulled down, but unfortunately did not go low enough. For after it was built up again and stood for years, the walls bulged out because [they] were too weak to sustain the superstructure and threatened disaster. This rendered it necessary to build another.

The third court house was planned by Robert Mills, an architect of skill and he was then living in abbeville, he superintended its erection. C. Humphries was the contractor. It was built in 1829, perhaps 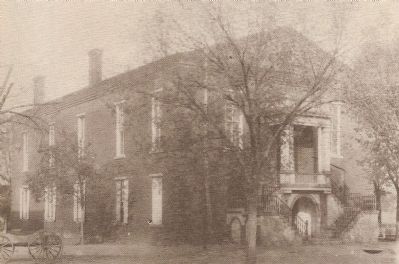 Abbeville County by the Abbeville County Historical Society, circa 1900
10. Abbeville County's Fifth Courthouse
1872-1908
not completed until the next year. It stood as near to the first brick court house as was convenient, a little further down the Square. This was the best built and handsomest court house and in my opinion the best that we have had with one exception that it was too small. It had however a great defect, in digging the foundation, one corner of it passed over where there had formerly been a bully and they did not go deep enough and it resulted in some years in that corner sinking so as to make a crack in the wall to a considerable height. When the court house was condemned by being unsafe on account of the crack, it was decided to build another...After this another, the fourth court house was built which was the one burnt about 1872 in one of our disastrous fires and with it most of the books and public records in the Clerk's office.

The fifth court house thus rendered necessary was erected I believe on the same foundation as the fourth and is still in use [1886]. Of these last two I cannot speak with satisfaction as to the details which have escaped my recollection, why I cannot say as I have resided here all the time. I know that neither of them displayed any architectural beauty and that the last serves its purpose pretty well.

(Source: Old Abbeville: Scenes of the Past of a Town Where Old Times are not Forgotten by Lowry Ware (1992), recollection of 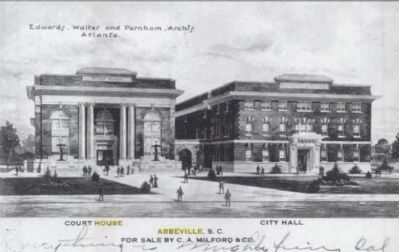 Abbeville County by Abbeville County Historical Society, circa 1900
11. Historic Postcard
Abbeville County Courthouse
and City Hall/Opera House
Robert Henry Wardlaw, pgs 13-14.)
— Submitted October 14, 2010, by Brian Scott of Anderson, South Carolina.
4. Courthouses in South Carolina Designed by William Augustus Edwards
William A. Edwards was born 8 December 1866 in Darlington, South Carolina. He was educated at St. David's Academy, Richmond College, and the University of South Carolina. After graduation in 1885 he moved to Virginia where he eventually formed a partnership with another Darlington County native, Charles Coker Wilson. The firm moved from Roanoke, Virginia, to Columbia, South Carolina in 1895. The partnership continued until ca. 1902; however, no buildings designed by the firm have as yet been identified.

Around 1902, Edwards established a firm with Frank C. Walter, a relationship which lasted about six years. The abbeville County Courthouse about this same time. Whether Edwards relocated to Atlanta before or after the dissolution of Edwards and Walter is uncertain, but it is known that he set up a private practice there in 1908. The Dillon County Courthouse, perhaps the finest building in this group, and the Calhoun Courthouses were designed by Edwards alone.

Edwards became a member of the Atlanta chapter of the American Institute of Architects in 1913 and in the following year formed a partnership with William J. Sayward, a relationship which lasted until Edwards' death in 1939. The firm of Edwards and Sayward was quite prolific during its quarter century in existence, designing buildings throughout Georgia and in South Carolina and Florida. Edwards and Sayward designed the York County Courthouse in 1914 and the Jasper County Courthouse in 1915.

Courthouses designed by Edwards, alone or in partnership, in South Carolina: