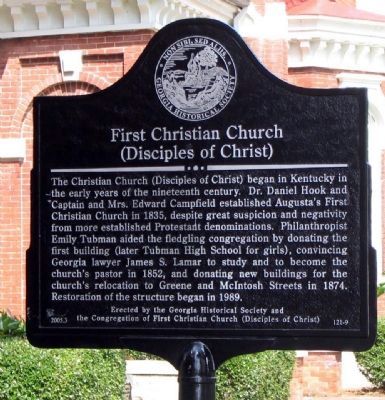 The Christian Church (Disciples of Christ) began in Kentucky in the early years of the nineteenth century. Dr. Daniel Hook and Captain and Mrs. Edward Campfield established Augusta’s First Christian Church in 1835, despite great suspicion and negativity from more established Protestant denominations. Philanthropist Emily Tubman aided the fledgling congregation by donating the first building (later Tubman High School for girls), convincing Georgia lawyer James S. Lamar to study and to become the church’s pastor in 1852, and donating new buildings for the church’s relocation to Greene and McIntosh Streets in 1874. Restoration of the structure began in 1989.

Topics and series. This historical marker is listed in these topic lists: Churches & Religion • Notable Buildings. In addition, it is included in the Georgia Historical Society series list. A significant historical year for this entry is 1835. 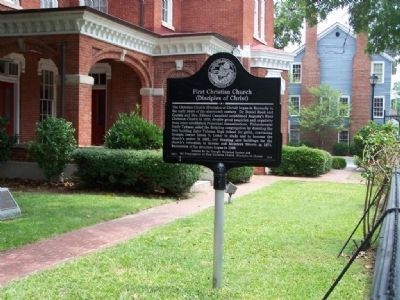 Click or scan to see
this page online
57.834′ W. Marker is in Augusta, Georgia, in Richmond County. Marker is on Greene Street (Georgia Route 28) near 7th (McIntosh) Street, on the left when traveling east. Touch for map. Marker is at or near this postal address: 629 Greene St, Augusta GA 30901, United States of America. Touch for directions. 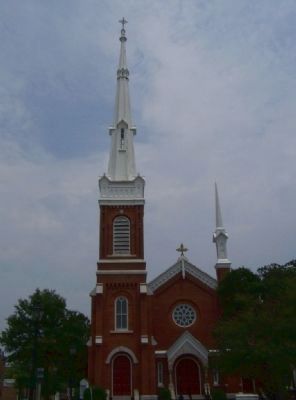