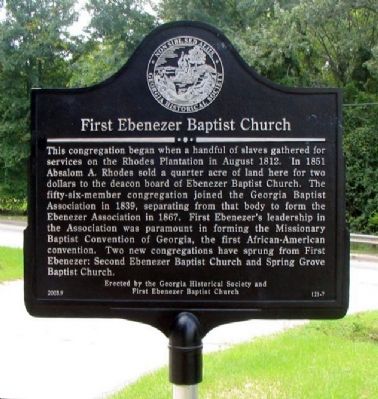 This congregation began when a handful of slaves gathered for services on the Rhodes Plantation in August 1812. In 1851 Absalom A. Rhodes sold a quarter acre of land here for two dollars to the deacon board of Ebenezer Baptist Church. The fifty-six-member congregation joined the Georgia Baptist Association in 1867. First Ebenezer's leadership in the Association was paramount in forming the Missionary Baptist Convention of Georgia, the first African-American convention. Two new congregations have sprung from First Ebenezer: Second Ebenezer Baptist Church and Spring Grove Baptist Church.

Topics and series. This historical marker is listed in these topic lists: African Americans • Churches & Religion. In addition, it is included in the Georgia Historical Society series list.