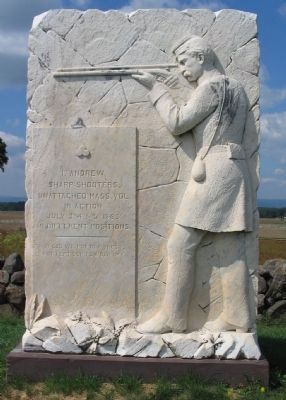 In God we put our trust.
But kept our powder dry.

Erected 1886 by State of Massachusetts.

Location. 39° 48.819′ N, 77° 14.127′ W. Marker is in Cumberland Township, Pennsylvania, in Adams County. Memorial is on Hancock Avenue, on the left when traveling north. Located northeast of the Angle and High Water Mark area in Gettysburg National Military Park. Touch for map. Marker is in this post office area: Gettysburg PA 17325, United States of America. Touch for directions. 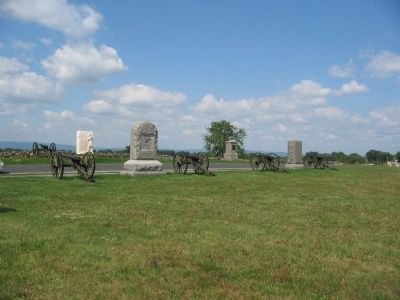 Photographed By Craig Swain, September 17, 2008
2. Monuments Between the Angle and Zeigler's Grove
Several monuments stand along Hancock Avenue south of Zeigler's Grove. On the far side of the Avenue stand the monuments to Andrew's Sharpshooters and the 14th Connecticut. On the near side are monuments to Battery K, 1st New York Light Artillery and the 11th Independent Artillery Battery (the later was attached to the former during the battle).

Related markers. Click here for a list of markers that are related to this marker. 1st Company of Mass. Sharpshooters monuments and markers.