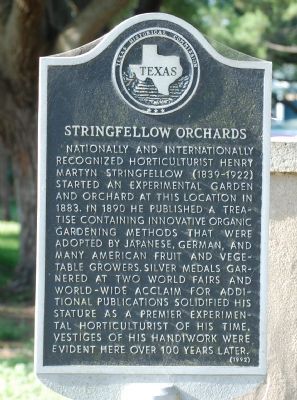 Photographed By Russell Ross, June 10, 2007
1. Stringfellow Orchards Marker
The date of death on the marker is wrong for Mr. Stringfellow. He actually died in 1912.
Inscription.
Stringfellow Orchards. . Nationally and internationally recognized horticulturist Henry Martyn Stringfellow (1839–1922 (sic, 1912)) started an experimental garden and orchard at this location in 1883. In 1890 he published a treatise containing innovative organic gardening methods that were adopted by Japanese, German and many American fruit and vegetable growers. Silver medals garnered at two world fairs and world-wide acclaim for additional publications solidified his stature as a premier experimental horticulturist of his time. Vestiges of his handiwork were evident here over 100 years later. . This historical marker was erected in 1992 by Texas Historical Commission. It is in Hitchcock in Galveston County Texas

Nationally and internationally recognized horticulturist Henry Martyn Stringfellow (1839–1922 (sic, 1912)) started an experimental garden and orchard at this location in 1883. In 1890 he published a treatise containing innovative organic gardening methods that were adopted by Japanese, German and many American fruit and vegetable growers. Silver medals garnered at two world fairs and world-wide acclaim for additional publications solidified his stature as a premier experimental horticulturist of his time. Vestiges of his handiwork were evident here over 100 years later.

Topics. This historical marker is listed in these topic lists: African Americans • Horticulture & Forestry. A significant historical year for this entry is 1883. 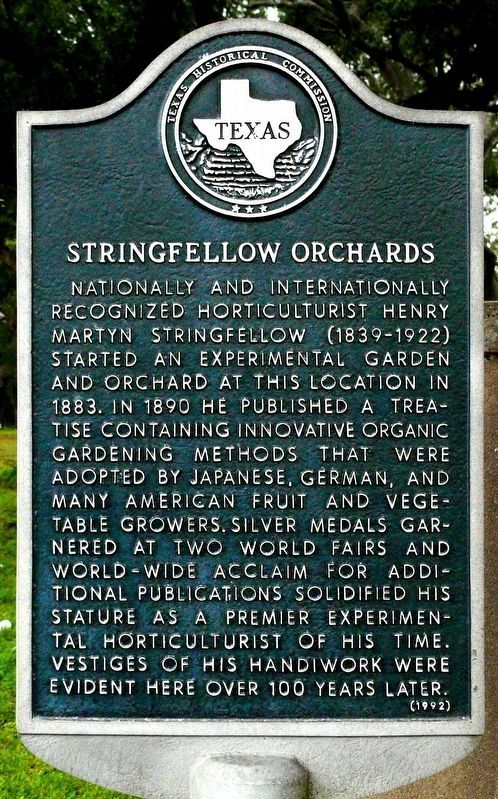 Click or scan to see
this page online
Land” by the Galveston Daily Newspaper in March of 2006, it is a little off the beat and path. Only five minutes South from I-45 (South) and Delaney Road. Touch for map. Marker is at or near this postal address: 7902 Hwy 6, Hitchcock TX 77563, United States of America. Touch for directions.

More about this marker. Located in the center of town, Stringfellow Orchards is a beautiful place to see. The home sits on 9.5 acres and the drive is lined with big oaks and tall pine trees.

Regarding Stringfellow Orchards. Mr. Stringfellow was the first to plant Satsuma oranges (Citrus unshiu marcovitch) from Japan on the Gulf Coast. He started the citrus industry on the Gulf Coast. During the 1880s & 1890s African-American men were making fifty cents per day in the area. Mr. Stringfellow was paying his African American workers one dollar per day. He had the most successful orchard in the area. This allowed him to pay well and retain the top talent. He was paying what he felt was a fair wage, before there was any social pressure to do so. 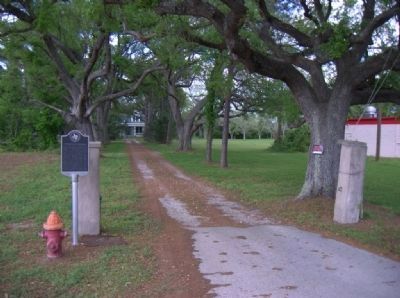 Additional commentary.
1. Stringfellow Orchards
The property was in very bad shape when we found it. As you can see from the photos we have come a very long way. This property has now been saved and we encourage others to be involved in your local preservation organizations. A once forgotten treasure is now the center of community activities.

Mr. Stringfellow was a very successful man during his lifetime. Leslie Stringfellow (1866–1886) was the only son of Henry & Alice Stringfellow. After Leslie’s death in 1886, Alice was so grieved that she refused to get out of bed. She eventually tried having seances to contact Leslie. Mr. & Mrs. Stringfellow would meet every night in the upstairs parlor at 7 pm for the seances. They collected over 4000 letters of what they said were communications with their son. I believe Mr. Stringfellow wrote these letters to help his wife deal with the grief of losing their only child. I do not believe he ever told his wife the truth. When he died communication with Leslie stopped. Mr. & Mrs. Stringfellow were well educated people. They came from very wealthy families and left their mark on Hitchcock. 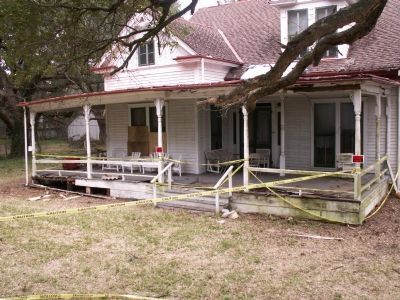 Photographed By Samuel Collins III, January 27, 2006
4. Stringfellow home before restoration
The home and property was purchased in December of 2005. The grounds were all overgrown and the house was almost beyond repair. This is a photo taken after the trees and brush were cleared around the house.
— Submitted January 19, 2008, by Samuel Collins III of Hitchcock, Texas.
2. Economic impact on African American community
Stringfellow Orchards was a very successful business in the 1880’s and 1890’s. Because of this success, Mr. Stringfellow was able to pay his workers one dollar a day (when the going wages were only fifty cents per day). This allowed these men the opportunity to better take care of their families. It also allowed them the opportunity to buy land. In his book, The New Horticulture (1896) Mr. Stringfellow mentions the name of one of these men, Frank Bell. The Bell family of Texas City is very well known in the area. Frank Bell, Jr. (1893–1963) was a very successful businessman in the area.

The connection between Stringfellow Orchards and the Bell family was a great discovery. It shows that after slavery there were some people that were willing to pay fair wages to Black workers. Just as poverty cycles over and over, if given the opportunity to break the poverty cycle, some will make the most of it. Frank Bell used his extra money to buy land for his family and encourage his children to go further. The impact of which is still being felt by the community today.
— Submitted January 19, 2008, by Samuel Collins III of Hitchcock, Texas. 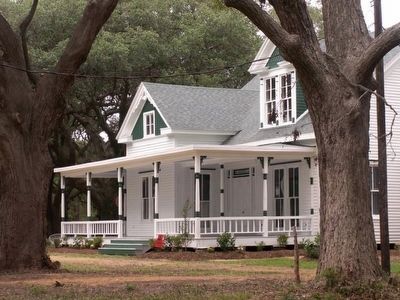 Photographed By Samuel Collins III, June 18, 2006
5. After restoration
This photo was taken less than five months after the previous picture. The Stringfellow home had returned to its former glory. This was the day after the first community event at the property. On the day before this was taken, over 600 people from around the Galveston County area celebrated Juneteenth on the grounds. The re-birth of Stringfellow Orchards was here.
3. An Outstanding Effort!
I have had the opportunity to visit Stringfellow Orchards during one of the community Juneteenth celebrations held there. The owners, Doris and Sam Collins, have done an amazing job of restoring this property and implementing a vision that is a benefit to the entire community. I look forward to celebrating Juneteenth and other historically-significant occassions at Stringfellow. Further, I would love to see the horticultural history of Stringfellow continued through education and demonstration of innovative and natural gardening practices.
— Submitted January 20, 2008, by S. Gillins of Galveston, Texas.
4. If Walls Could Talk
Just saw the house featured on If Walls Could Talk. What good folks the Collins' are for bringing this special piece of history back to life. Very neat!
— Submitted July 16, 2009, by Amy Vance of Friendswood, Texas.
5. Beautiful property
Stringfellow Orchards is Beautiful. You should make every effort to come out and see it. The sunsets are amazing through the large oaks. Sam Collins is about the nicest man and his families dedication to this project is amazing. 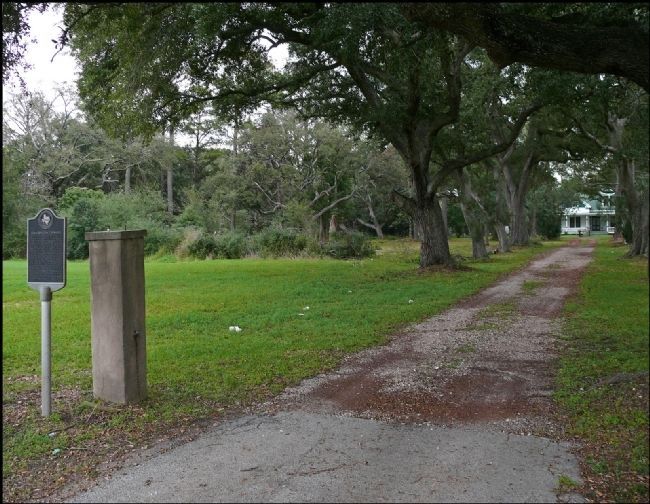 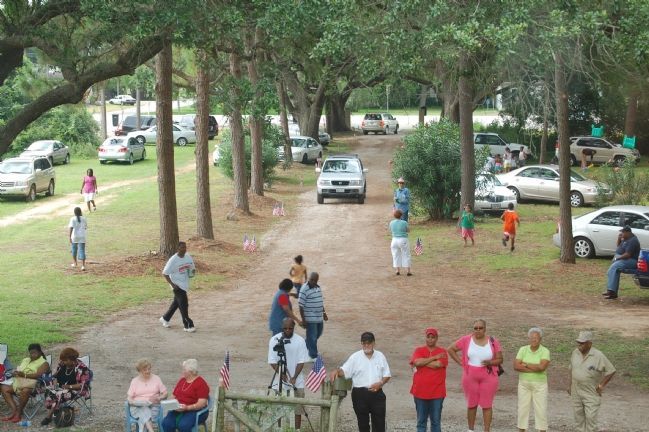 Photographed By Russell Ross, June 16, 2007
7. The beautiful driveway, taken from upstairs window
The local community comes out to enjoy a day at Stringfellow Orchards. The once forgotten property is now home to one of the best Juneteenth celebrations in the state of Texas. Many other events are planned to share the property with the community. 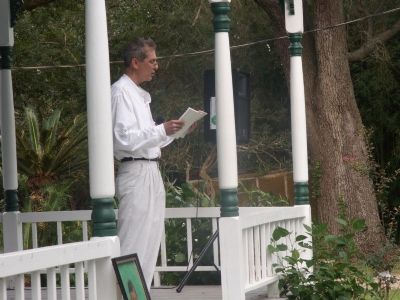 Photographed By Samuel Collins III, September 16, 2006
8. Author Stephen Chism on the porch
Stephen Chism makes a visit to Stringfellow Orchards. Stephen wrote a book about the Stringfellow family and was in town for a private event at the property. He signed books for members of the Menard Society. 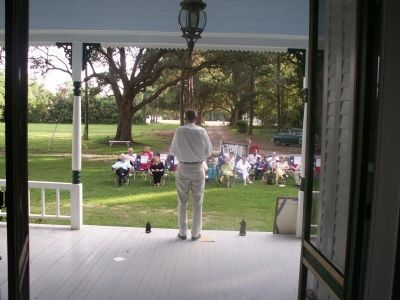 Photographed By Samuel Collins III, September 16, 2006
9. Menard Society members listening to Stephen Chism
This photo was taken from inside the two front doors looking south down the drive. An amazing view. 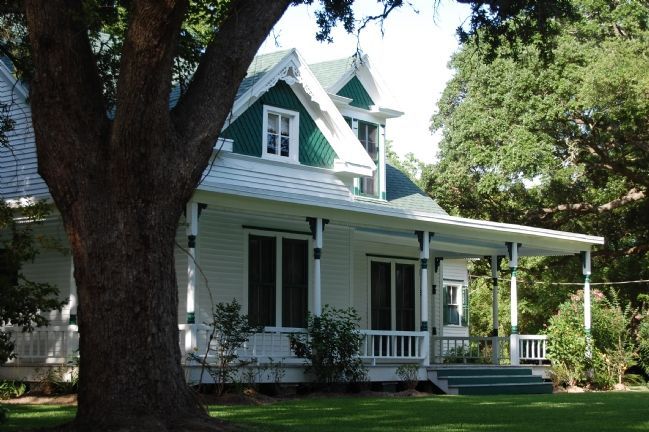 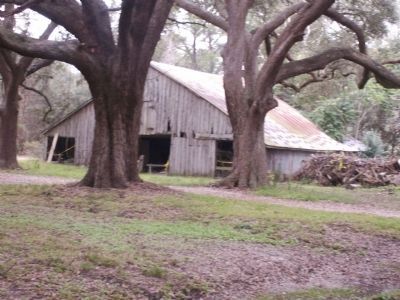 Photographed By Samuel Collins III, February 9, 2007
11. Old Stringfellow Barn
Tucked behind the large oak trees on the property is this jewel. Before the invention of the automobile, this barn housed the 19th century popular means of transportation, better known as the horse. It has stood the test of time, over 100 years old and still counting. Once the center of attention on a daily basis, now the barn sits as a constant reminder of the superior carpentry of those that came before us. 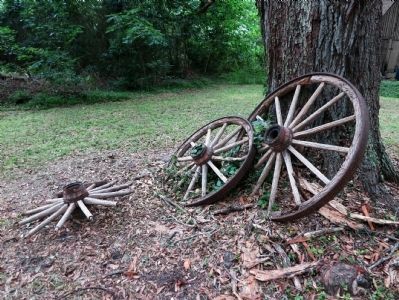 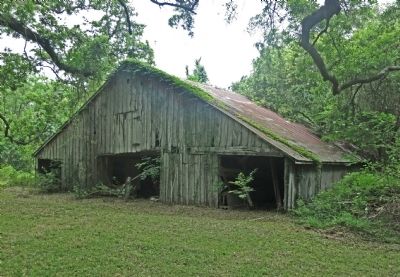 Photographed By Jim Evans, May 23, 2013
13. A Current Picture of the Stringfellow Orchards Barn 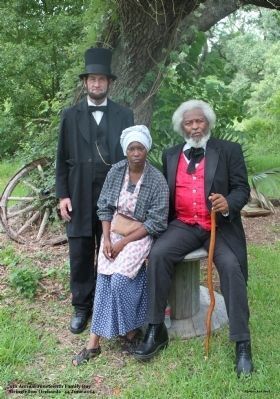 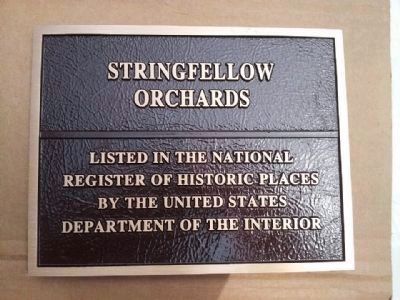