They All Had The Right Stuff 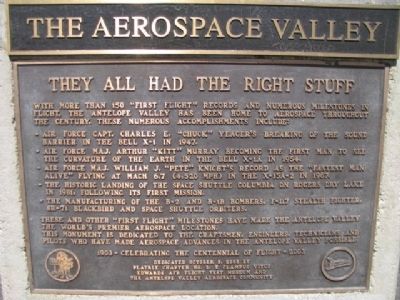 By Denise Boose, May 12, 2012
1. The Aerospace Valley Marker
Inscription.
The Aerospace Valley. They All Had The Right Stuff. With more than 150 "First Flight" records and numerous milestones in flight, the Antelope Valley has been home to Aerospace throughout the century. These numerous accomplishments include:. -Air Force Capt. Charles E. "Chuck" Yeager's breaking of the sound barrier in the Bell X-1 in 1947. . -Air Force Maj. Arthur "Kitt" Murray becoming the First Man to see the curvature of the earth in the Bell X-1A in 1954. . -Air Force Maj. William J. "Pete" Knight's record as the "Fastest Man Alive" flying at Mach 6.7 (4,520 MPH) in the X-15A-2 in 1967. . -The historic landing of the Space Shuttle Columbia on Rogers Dry Lake in 1981, following its first mission. . -The manufacturing of the B-2 and B-1B Bombers, F-117 Stealth Fighter, SR-71 Blackbird and Space Shuttle Orbiters.. These and other "First Flight" Milestones have made the Antelope Valley the world's premier aerospace location. This monument is dedicated to the craftsmen, engineers, technicians and pilots who have made aerospace advances in the Antelope Valley possible.. Celebrating the Centennial of Flight 1903-2003. . This historical marker was erected in 2003 by Platrix Chapter No. 2 E Clampus Vitus, Edwards AFB Flight Test Museum, and The Antelope Valley Aerospace Community.. It is Near Palmdale in Los Angeles County California

With more than 150 "First Flight" records and numerous milestones in flight, the Antelope Valley has been home to Aerospace throughout the century. These numerous accomplishments include: 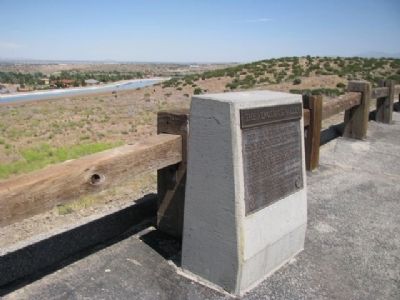 Topics and series. This historical marker is listed in this topic list: Air & Space. In addition, it is included in the E Clampus Vitus series list. A significant historical year for this entry is 1947. 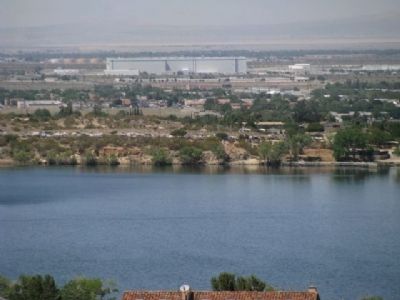 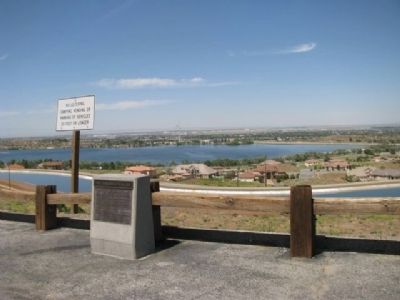 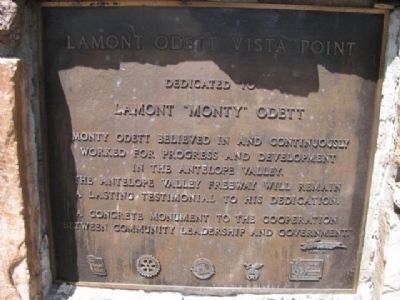 By Denise Boose, May 12, 2012
5. Lamont Odett Vista Point
Dedicated to Lamont "Monty" Odett Monty Odett believed in and continuously worked for progress and development in the Antelope Valley. The Antelope Valley Freeway will remain a lasting testimonial to his dedication. "A concrete monuemnt to the cooperation between community leadership and government." Located towards the North end of the parking lot. 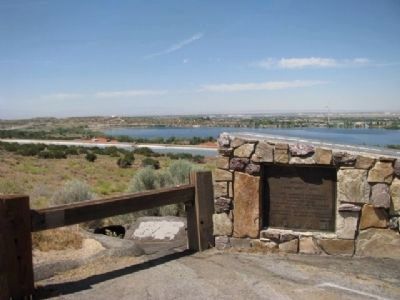 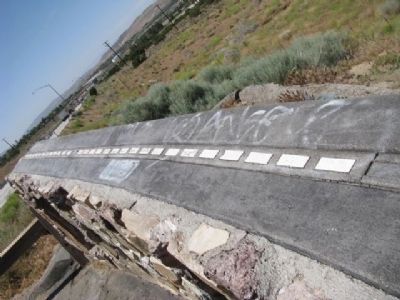 By Denise Boose, May 12, 2012
7. Lamont Odett Vista Point Marker
On top of the marker looks like a freeway. 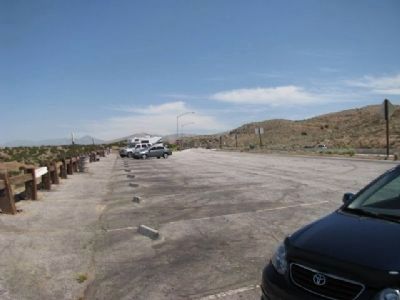 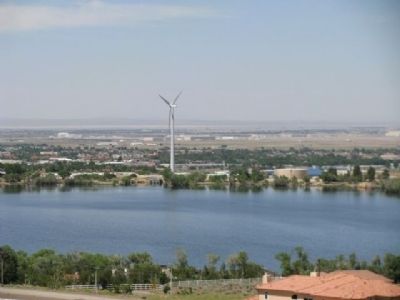