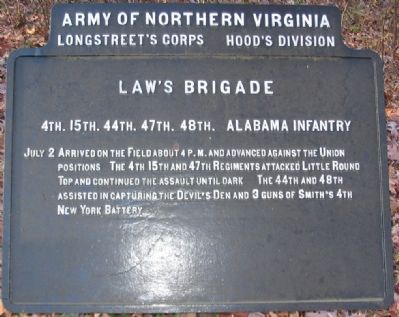 Topics. This historical marker is listed in this topic list: War, US Civil. A significant historical date for this entry is July 2, 1835.

Location. 39° 47.372′ N, 77° 14.239′ W. Marker is in Cumberland Township, Pennsylvania, in Adams County. Marker is at the intersection of Warren Avenue and Sykes Avenue, on the left when traveling west on Warren Avenue. Located between Little and Big Round Tops in Gettysburg National Military Park. Touch for map. Marker is in this post office area: Gettysburg PA 17325, United States of America. Touch for directions.

Other nearby markers. At least 8 other markers are within walking distance of this marker. 9th Pennsylvania Reserves (a few steps from this marker); …built for defense (about 300 feet away, measured in 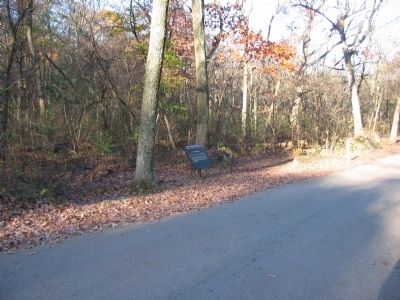 Related markers. Click here for a list of markers that are related to this marker. Law's Brigade at Gettysburg. 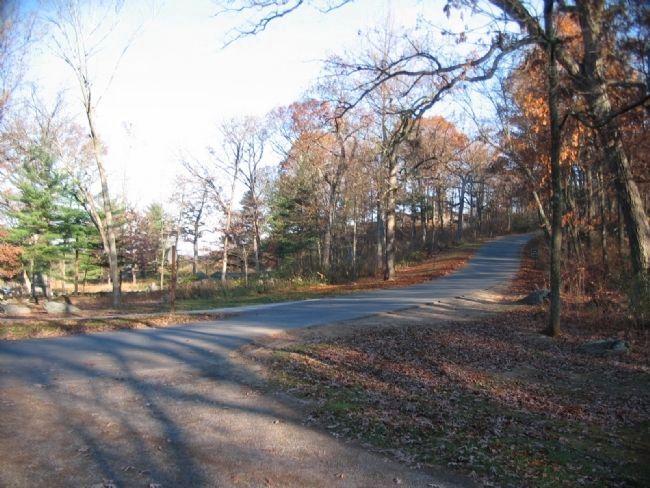 Photographed By Craig Swain, November 11, 2008
3. Advance of the 47th Alabama
Looking from the intersection of Wright Avenue (which becomes Warren Avenue) and Sykes Avenue, which runs up the slope of Little Round Top to the right. The 47th Alabama advanced up the hill through this section of wooded boulders on the west (left) of the Avenue. The 4th Alabama was on their left, away from the camera. The 15th Alabama was to the right of the 47th, along or east of modern Sykes Avenue. As the battle developed, the 15th would swing wider to the east. 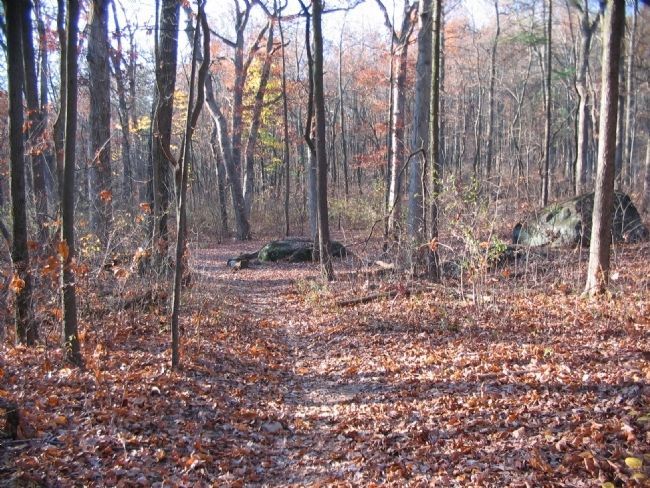 Photographed By Craig Swain, November 11, 2008
4. Oates' 15th Alabama and the Rock Ledge
Looking east from a foot path near the 20th Maine Monument (east of Sykes Avenue). As the 15th Alabama moved to the southeast side of Little Round Top, it encountered the 20th Maine, which was at that time the left flank of the Federal army. In his after action report Oates stated, "I halted my regiment as its left reached a very large rock, and ordered a left-wheel of the regiment...taking advantage of a ledge of rocks, running off in a line perpendicular to the one I had just abandoned...." While the exact spot of the large rock is indeterminate, the boulders here are part of the ledge Oates referred to. The 15th was then facing up hill (toward the camera) at the refused left flank of the Maine regiment. 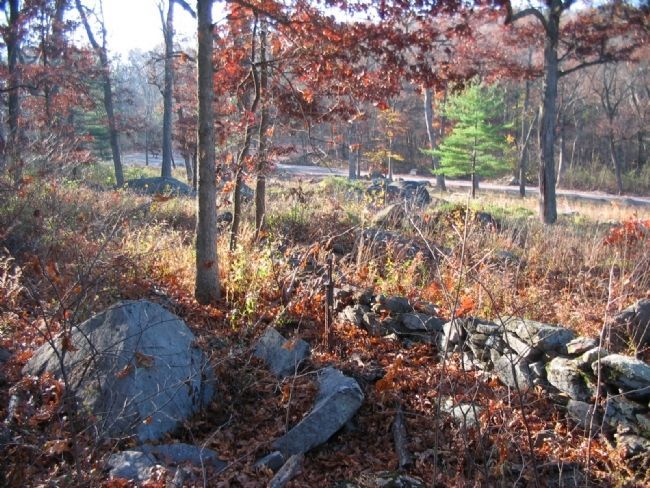 Photographed By Craig Swain, November 11, 2008
5. The 4th Alabama's Advance
Looking south, down the slope of Little Round Top. The intersection of Warren and Sykes Avenues is in the upper left of frame. In the far center is the Law Brigade tablet beside Warren Avenue. The 4th Alabama, with the 5th Texas on their left, struggled up the slopes here. A metal post in the foreground, just in front of the stone breastworks, is all that remains of a marker to either the 18th or 22nd Massachusetts Infantry Regiment (likely the 18th). Both were broken off many years ago. 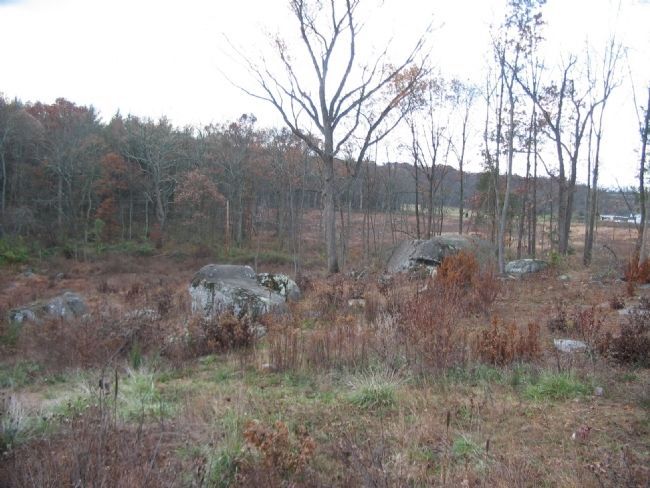