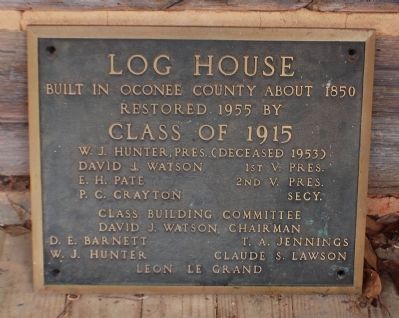 Topics. This historical marker is listed in this topic list: Notable Buildings. A significant historical year for this entry is 1850.

Location. 34° 40.467′ N, 82° 49.25′ W. Marker is in Clemson, South Carolina, in Pickens County. Marker is on Perimeter Road. Marker is located near the front door of the cabin, which is south of the fish pond on the grounds of the South Carolina Botanical Gardens. Touch for map. Marker is in this post office area: Clemson SC 29631, United States of America. Touch for directions. 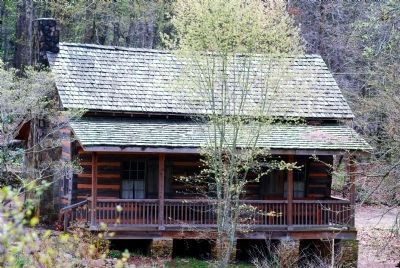 Additional commentary.
1. The Hunt Cabin
Nestled deep in the South Carolina Botanical Garden stands a monument to a forgotten time. The restored Hunt Cabin was built around 1826. The log structure is the centerpiece of the Garden's "Pioneer Complex". 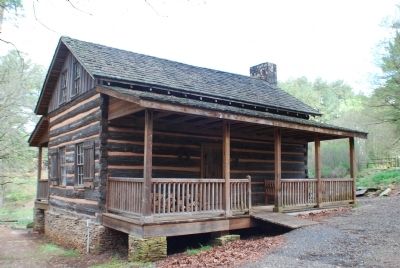 Photographed By Brian Scott
3. Hunt Cabin - South Corner
Dalton, gave Charles 2,300 acres of land. The Hunt Cabin was built on this tract of land in Seneca, South Carolina. The Cabin was scheduled to be torn down, but was purchased by the Clemson Class of 1915 for $35.00 and moved to Clemson College in 1955.

The Hunt Cabin offers an interesting comparison to the Hanover House, also located in the Garden. Built about 110 years apart, each represents very different lifestyles in the State of South Carolina. The elegant Hanover House, a replica of French Huguenot design was a low country home built in 1716, while the 19th century Hunt Cabin is representative of the upcountry, small farmer. Both houses were lived in by the typical "middle-class" families of the different time periods.

The original home contained four bedrooms on the first floor and a large front porch. As it currently stands, the Hunt Cabin has one large open room on the first floor, and the front porch is long removed. During the early years, the Hunt Cabin was visited by many travelers. General Andrew Pickens, a good friend of the Hunts, spent many nights in their home. Legend has it that during the Civil War, General Sherman spent a night at the cabin, and thus spared it from the torched during his long campaign in the South.
Other structures in the Pioneer Complex offer a glimpse of life in early Upstate South Carolina. A smaller log cabin stands there, as well as a grist mill and a smoke house. The South Carolina Botanical Garden is open year round and is free to the public. As you walk under the deep canopy of trees, step back into a time when small cabins like these dotted the South Carolina landscape.
— Submitted January 4, 2009, by Brian Scott of Anderson, South Carolina.
Credits. This page was last revised on June 16, 2016. It was originally submitted on January 4, 2009, by Brian Scott of Anderson, South Carolina. This page has been viewed 1,271 times since then and 38 times this year. Photos:   1, 2, 3. submitted on January 4, 2009, by Brian Scott of Anderson, South Carolina.
Share this page.