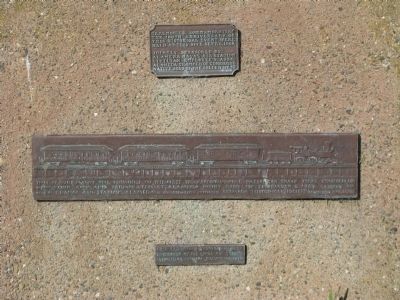 [Center and Main Marker:]
This plaque marks the terminus of the First Transcontinental Passenger train that started in New York City and terminated at Alameda Point Pier on September 6, 1869.
Erected by the U.S. Naval Air Station, Alameda in cooperation with the Alameda Historical Society Dedicated Aug. 22, 1953. Wm G. Huff

[Small Upper Marker:]
Ceremonies commemorating the 100th Anniversary of this historical event were held at this site Sept. 6, 1969.

Topics and series. This historical marker is listed in these topic lists: Landmarks • Notable Places

Click or scan to see
this page online
• Railroads & Streetcars. In addition, it is included in the California Historical Landmarks, the Native Sons/Daughters of the Golden West, and the Transcontinental Railroad series lists. A significant historical date for this entry is September 6, 1869.

Location. 37° 47.207′ N, 122° 18.175′ W. Marker is in Alameda, California, in Alameda County. Marker is on West Mall Square, on the right when traveling north. The marker is located between Lexington and Saratoga Streets at the entrance to the Naval Air Station Mall. Touch for map. Marker is in this post office area: Alameda CA 94501, United States of America. Touch for directions.

Regarding Alameda Terminus of the 1st Transcontinental Railroad. 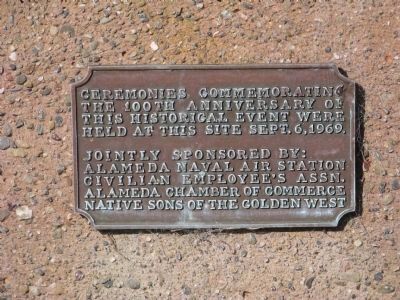 Photographed By Syd Whittle, March 14, 2010
3. The 1st Transcontinental Railroad Small Upper Marker
This site was designated as California Registered Historic Landmark No. 440 on June 8, 1949:
Statement of Significance:
With the Pacific Railroad Act of 1862 authorizing construction of a railroad and telegraph line, the first concentration of activity was east of Sacramento. Subsequently the line was opened from Sacramento to San Jose. During June 1869 construction was started near Niles, and by August a temporary connection had been made at San Leandro with the San Francisco and Alameda Railroad. On September 6, 1869, the first Central Pacific train reached San Francisco Bay at Alameda.

Related markers. Click here for a list of markers that are related to this marker. Follow the route of the 1st Transcontinental Railroad westward bound from Sacramento.

2. Listings of the Overland Route. A detail of the route of the Transcontinental 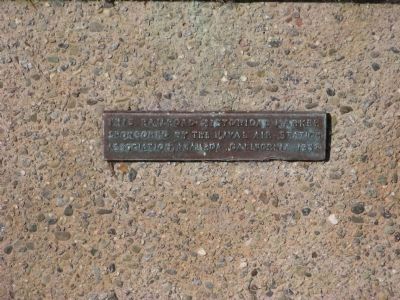 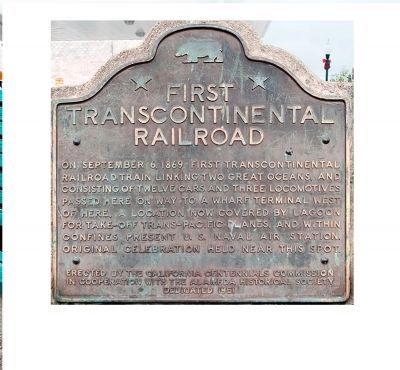 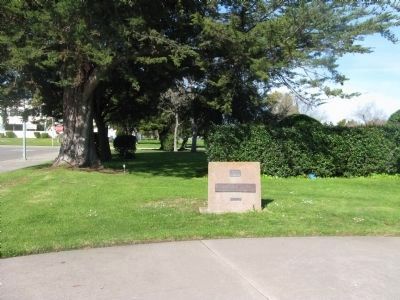 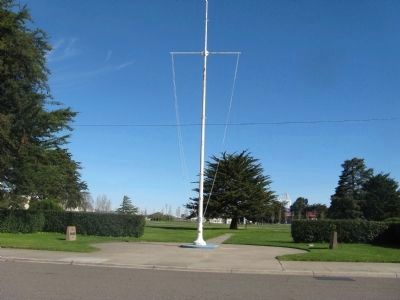 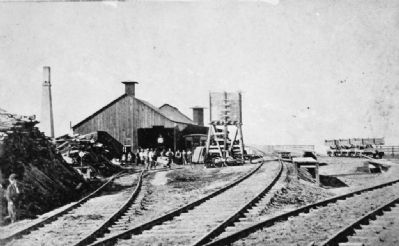