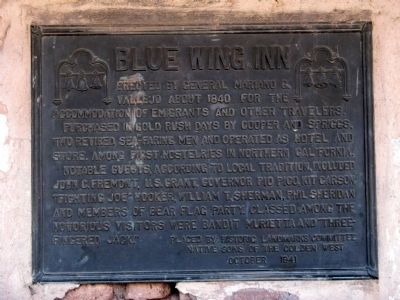 Photographed By Syd Whittle, January 10, 2009
1. Blue Wing Inn Marker
Inscription.
Blue Wing Inn. . Erected by General Mariano G. Vallejo about 1840 for the accommodations of emigrants and other travelers. Purchased in Gold Rush Days by Cooper and Spriggs, two retired sea-faring men and operated as hotel and store. Among first hostelries in Northern California. , Notable guests, according to local tradition, included John C. Fremont, U.S.Grant, Governor Pio Pico, Kit Carson, “Fighting Joe” Hooker, William T. Sherman, Phil Sheridan and members of the Bear Flag Party. Classed among the notorious visitors were Bandit Murietta and “Three-Fingered Jack.” , . This historical marker was erected in 1941 by Native Sons of the Golden West. It is in Sonoma in Sonoma County California

Topics and series. This historical marker is listed in these topic lists: Industry & Commerce • Landmarks • Notable Buildings • Notable Places • Settlements & Settlers. In addition, it is included in the California Historical Landmarks, and the Native Sons/Daughters of the Golden West series lists. A significant historical year for this entry is 1840. 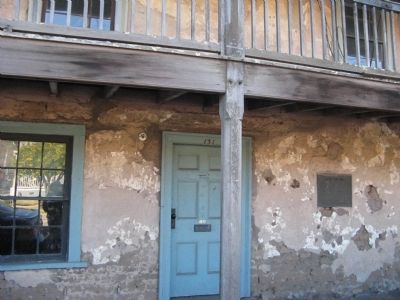 Click or scan to see
this page online
27.329′ W. Marker is in Sonoma, California, in Sonoma County. Marker is mounted on the front of the building. Touch for map. Marker is at or near this postal address: 133 East Spain Street, Sonoma CA 95476, United States of America. Touch for directions.

Regarding Blue Wing Inn. This building was designated as California Registered Historical Landmark No. 17 on June 1, 1932.

Also see . . .
1. Sonoma State Historic Park. California Department of Parks and Recreation website entry:
The historic, picturesque town of Sonoma is located in the heart of the beautiful Wine Country between Napa and Santa Rosa off Highway 12. Situated around a central plaza (the largest of its kind in California) filled with charming shops and restaurants, the city is home to Sonoma State Historic Park—site of the northernmost Franciscan Mission in California and birthplace of the California 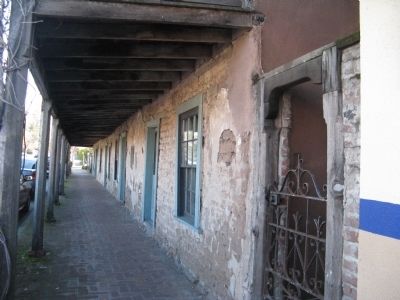 Additional commentary.
1. The Blue Wing Inn
A two-room section of this Monterey style adobe was built to house soldiers guarding the old Mission across the way. In 1849, James Cooper and Thomas Spriggs, former British seamen, purchased the property and added the present first and second floors to conduct a combined hotel and saloon known as the Sonoma House, later the Blue Wing. Bandit Joaquin Murietta and Three Fingered Jack were often customers here as well as several junior officers who would later gain Civil War fame: Grant, Sherman, Longstreet, Halleck, Stoneman, just to name a few. Young Lotta Crabtrees’s name is also found in the hotel’s guest book.
Used as a grocery store and later as a wine cellar, it provided the wine used to put out the fire that destroyed all of First Street East in 1911. Restored in 1947; building acquired 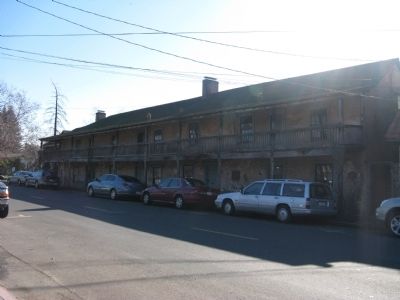 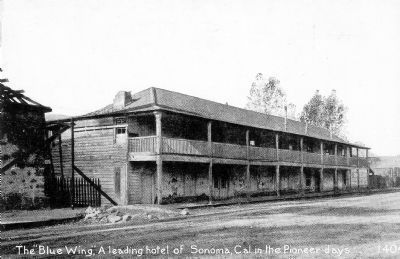 Note the difference in the condition of the building in this early photo, as compared to the postcard image in Photo #6, ie: boarded-up windows and decaying chimney. 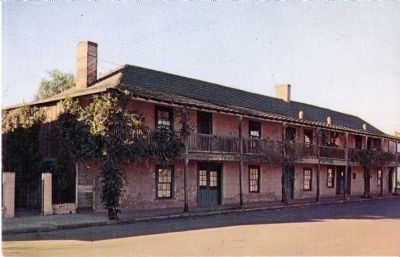 BLUE WING INN
Sonoma, California
Erected by General Mariano G. Vallejo about 1840 for the accommodation of emigrants and other travelers. Purchased in Gold Rush days by Cooper and Spriggs, two retired seafaring men, and operated as hotel and store, being one of the first hostelries of Northern California. Notable guests of the past include John C. Fremont, U.S. Grant, Kit Carson, and the Bear Flag Party as well as Juaquin Murietta and "Three Fingered Jack," according to local tradition. 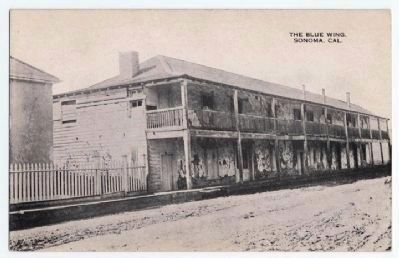 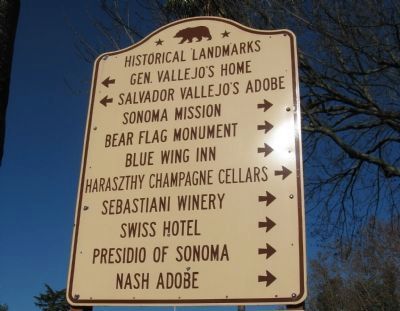