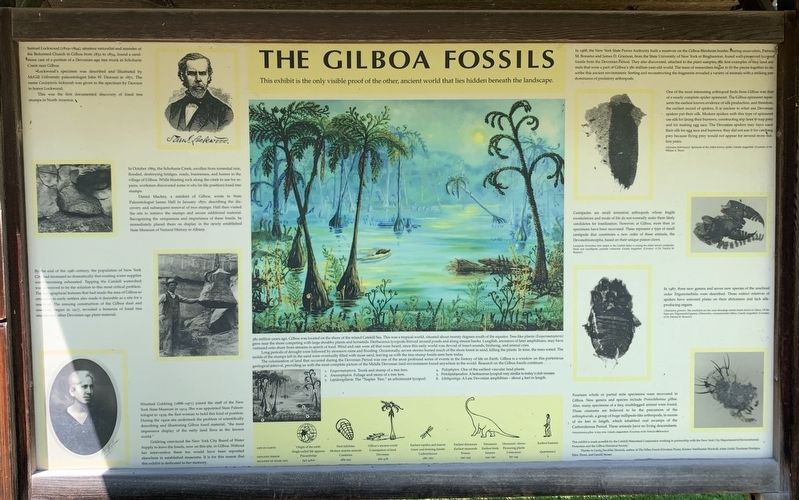 This exhibit is the only visible proof of the other, ancient world that lies hidden beneath the landscape.

380 million years ago, Gilboa was located on the shore of the inland Catskill Sea. This was a tropical world, situated about twenty degrees south of the equator. Tree-like plants (Eospermatopteris) grew near the shore competing with large shrubby plants and horsetails. Herbaceous lycopods thrived around ponds and along stream banks. Lungfish, ancestors of later amphibians, may have ventured onto shore from streams in search of food. Wind and rain were all that were heard, since this early world was devoid of insect sounds, birdsong, and animal cries.

Long periods of drought were followed by monsoon rains and flooding. Occasionally, severe storms buried much of the shore forest in sand, killing the plants. In time, the trees rotted. The molds of the stumps left in the sand were eventually filled with more sand, leaving us with the tree-stump fossils seen here today. 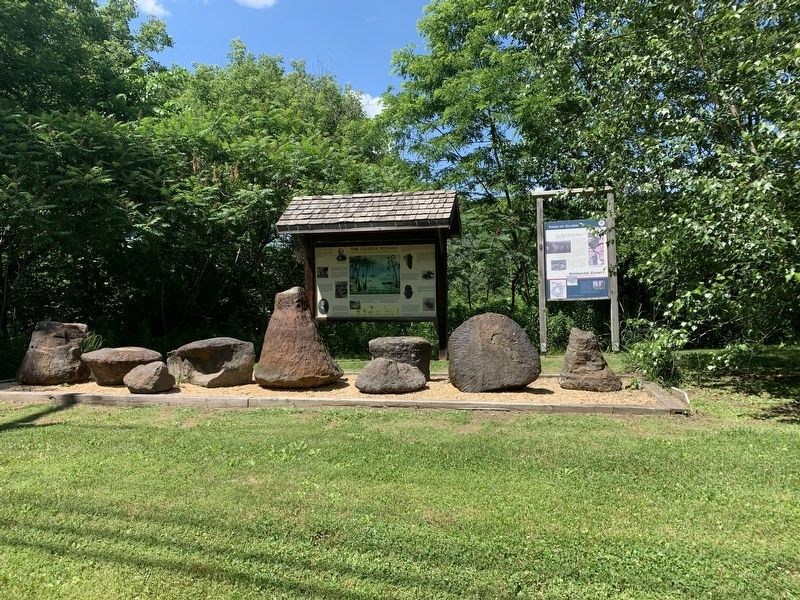 Click or scan to see
this page online
on Earth. Gilboa is a window on this portentous geological interval, providing us with the most complete picture of the Middle Devonian land environment found anywhere in the world. Research on the Gilboa fossils continues...

Samuel Lockwood (1819-1894 amateur naturalist and minister of the Reformed Church in Gilboa from 1852 to 1854, found a sandstone cast of a portion of a Devonian-age tree trunk in Schoharie Creek near Gilboa.
Lockwood's specimen was described and illustrated by McGill University paleontologist John W. Dawson in 1871. The name Caulopteris lockwoodi was given to the specimen by Dawson to honor Lockwood.
This was the first documented discovery of fossil tree stumps in North America.

In October 1869, the Schoharie Creek, swollen from torrential rain, flooded, destroying bridges, roads, businesses, and homes in the village of Gilboa. While blasting rock along the creek to use for repairs, workmen discovered some in situ (in life position) fossil tree stumps.
Daniel Mackey, a resident of Gilboa, wrote to State Paleontologist James Hall in January 1870, describing the discovery and subsequent removal of two stumps. Hall then visited the site to retrieve the stumps and secure additional material. Recognizing the uniqueness and importance of these fossils, he immediately 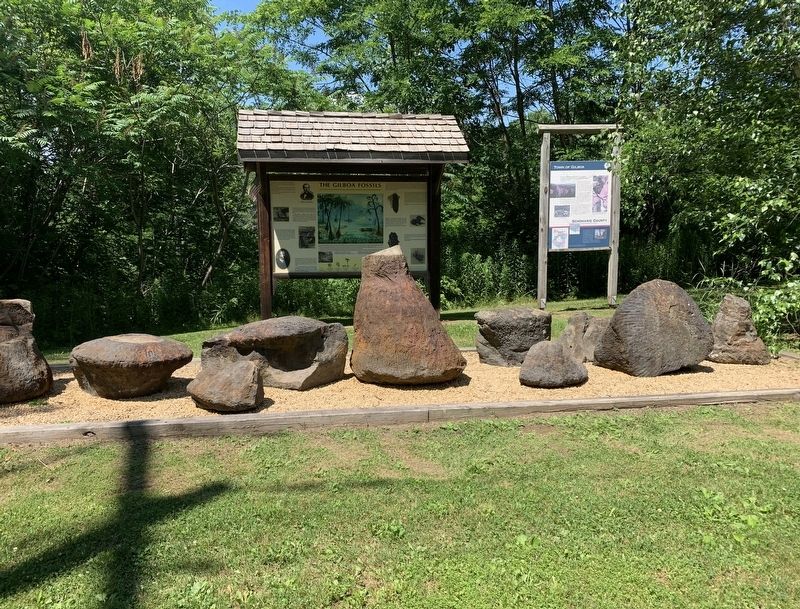 Photographed By Steve Stoessel, July 4, 2020
3. The Gilboa Fossils Marker
placed them on display in the newly established State Museum of Natural History in Albany.

By the end of the 19th century, the population of New York City had increased so dramatically that existing water supplies were becoming exhausted. Tapping the Catskill watershed was perceived to be the solution to this most critical problem. The topographical features that had made the area of Gilboa so attractive to early settlers also made it desirable as a site for a reservoir The ensuing construction of the Gilboa dam and reservoir begun in 1917, revealed a bonanza of fossil tree stumps and other Devonian-age plant material.

Winifred Goldring (1888-1971) joined the staff of the New York State Museum in 1914. She was appointed State Paleontologist in 1939, the first woman to hold this kind of position. During the 1920s she undertook the problem of scientifically describing and illustrating Gilboa fossil material, "the most impressive display of the early land flora in the known world”
Goldring convinced the New York City Board of Water Supply to leave the fossils, now on this site, in Gilboa. Without her intervention these too would have been reposited elsewhere in established museums. It is for this reason that this exhibit is dedicated to her memory. 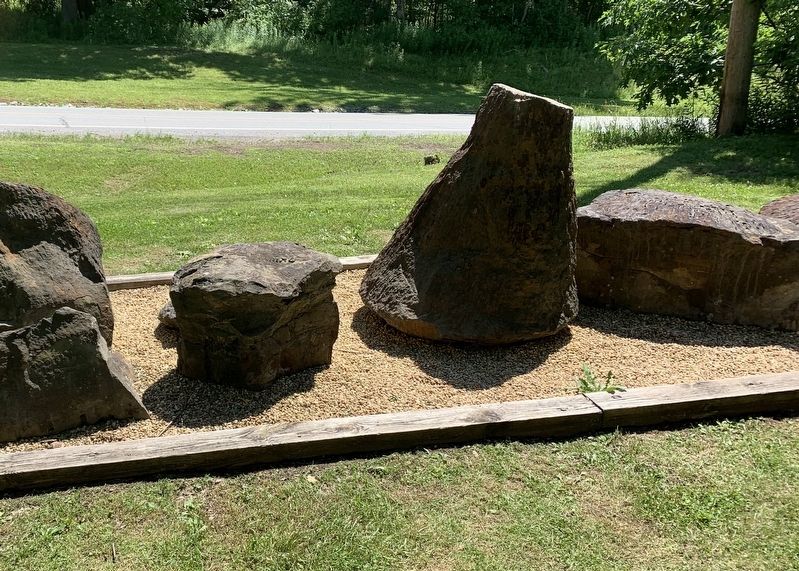 Photographed By Steve Stoessel, July 4, 2020
4. The Gilboa Fossils Marker
Authority built a reservoir on the Gilboa-Blenheim border. During excavation, Patricia M. Bonamo and James D. Grierson, from the State University of New York at Binghamton, found well-preserved lycopod fossils from the Devonian Period. They also discovered, attached to the plant samples, the first examples of tiny land animals that were a part of Gilboa's 380 million-year-old world. The team of researchers began to fit the pieces together to describe this ancient environment. Sorting and reconstructing the fragments revealed a variety of animals with a striking predominance of predatory arthropods.

One of the most interesting arthropods finds from Gilboa was that of a nearly complete spider spinneret. The Gilboa spinneret represents the earliest known evidence of silk production, and therefore, the earliest record of spiders. It is unclear to what use Devonian spiders put their silk. Modern spiders with this type of spinneret use silk for lining their burrows, constructing trip lines to trap prey and for making egg sacs. The Devonian spiders may have used their silk for egg sacs and burrows; they did not use it for catching prey because flying prey would not appear for several more million years.
Photo cation: Alterops fimbriunguis Spinneret of the oldest known spider. Greatly magnified (Courtesy of Dr. William A Shear)

Centipedes are small terrestrial arthropods whose fragile exoskeletons and mode of life do not normally make them likely candidates for fossilization. However, at Gilboa, more than 30 specimens have been recovered. These represent a type of small centipede that constitutes a new order of these animals, the Devonobiomorpha, based on their unique poison claws.
Photo Caption: Centipede Devenobis delta (refers to the Catskill delta) is among the oldest known centipedes Head and maxillipeds partially connected. Greatly magnified (Courtesy of Dr. Patricia M. Bonamo)

In 1987, three new genera and seven new species of the arachnid order Trigonotarbida were described. These extinct relatives of spiders have armored plates on their abdomens and lack silk-producing organs.
Photo Caption: Gilboarachne griersoni The arachnids are the most abundant animal found at Gilboa. Of the three new Trigonotarbid genera, Gilboarachne, commemorates Gilboa Greatly magnified (Courtesy of Dr. Patricia M. Bomano)

Fourteen whole or partial mite specimens were recovered in Gilboa. New genera and species include Protochthonius gilboa. Also, many specimens of a tiny, multilegged animal were found. These creatures are believed to be the precursors of the arthropleurids, a group of huge millipede-like arthropods, in excess of six feet in length, which inhabited coal swamps of the Carboniferous Period. These animals have no living descendants.
Photo Caption: Protochthonis gilboa A tiny mite. Greatly magnified. (Courtesy of Dr. Patricia Monamo)

Legend to center drawing:
1. Eospermatopteris. Trunk and stump of a tree fern.
2. Aneurophyton. Foliage and stems of a tree fern.
3. Lepidosigillaria. The "Naples Tree,” an arborescent lycopod.
4. Psilophyton. One of the earliest vascular land plants.
5. Protolepidopeudron. A herbaceous lycopod very similar to today's club mosses.
6. Ichthyostega. A Late Devonian amphibian- about 4 feet in length.

Topics. This historical marker is listed in these topic lists: Horticulture & Forestry • Paleontology • Roads & Vehicles. A significant historical month for this entry is January 1870.