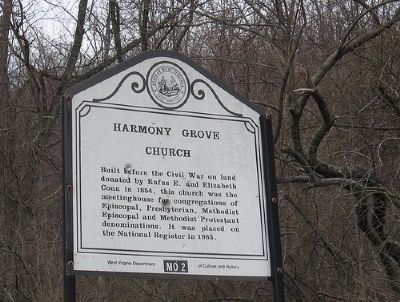 By Nessa Chan, March 30, 2008
1. Harmony Grove Church Marker
Inscription.
Harmony Grove Church. . Built before the Civil War on land donated by Rufus E. and Elizabeth Conn in 1854, this church was the meetinghouse for congregations of Episcopal, Presbyterian, Methodist Episcopal and Methodist Protestant denominations. It was placed on the National Register in 1983. . This historical marker was erected by West Virginia Department of Culture and History. It is in Harmony Grove in Monongalia County West Virginia

Built before the Civil War on land donated by Rufus E. and Elizabeth Conn in 1854, this church was the meetinghouse for congregations of Episcopal, Presbyterian, Methodist Episcopal and Methodist Protestant denominations. It was placed on the National Register in 1983.

Topics and series. This historical marker is listed in this topic list: Churches & Religion. In addition, it is included in the West Virginia Archives and History series list.

Location. Marker has been reported missing. It was located near 39° 36.303′ N, 79° 59.494′ W. Marker was in Harmony Grove, West Virginia, in Monongalia County. Marker was at the intersection of River Road and Master Graphics Road on River Road. Touch for map. Marker was in this post office area: Morgantown WV 26501, United States of America. Touch for directions.

Other nearby markers. At least 8 other markers are within 2 miles of this location, measured as the crow flies. Dunkard Sands (approx. 1½ miles away); Norman Rossinow (approx. 1.6 miles away); James K. Samuel, Jr. 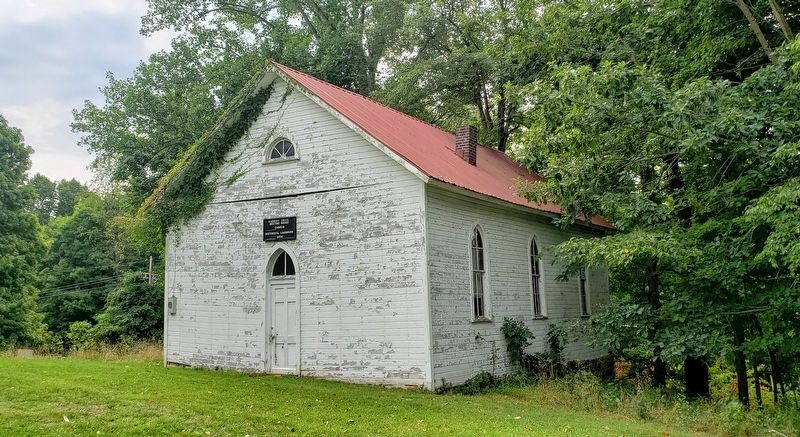 Also see . . .  1983 National Register of Historic Places Nomination Form. Excerpt: “The constitution and deed also stated the conditions for the use of the building. The first resolution of the constitution stated that Roman Catholics were prohibited from using the structure, not a surprising statement in mid-nineteenth-century America. The second resolution stated that Methodist Episcopals and Methodist Protestants could use the church on the first Sunday of each month, ‘the Presbyterians old side and the Cumberland Presbyterians’ on the second Sunday, and the ‘Baptist Reformed’ on the third Sunday. The fourth and fifth Sundays were ‘to be left open to any Protestant Minister of good standing in his own church.’ Finally, the church was to be used as a school during week days. None of these provisions would have been unusual in a rural area, where denominations could not afford to build separate churches, where congregations were served by circuit riders, and where it would have been wasteful to build two public buildings, one for worship on Sunday and one for education during the week.” (Submitted on June 21, 2014.)
Credits. This page was last revised on August 27, 2020. It was originally submitted on April 2, 2013. This page has been viewed 415 times since then. Last updated on July 19, 2020. Photos:   1. submitted on April 2, 2013.   2. submitted on August 26, 2020, by Bradley Owen of Morgantown, West Virginia. • Devry Becker Jones was the editor who published this page.
Share This Page.