In Past and Present: Mirror on American History 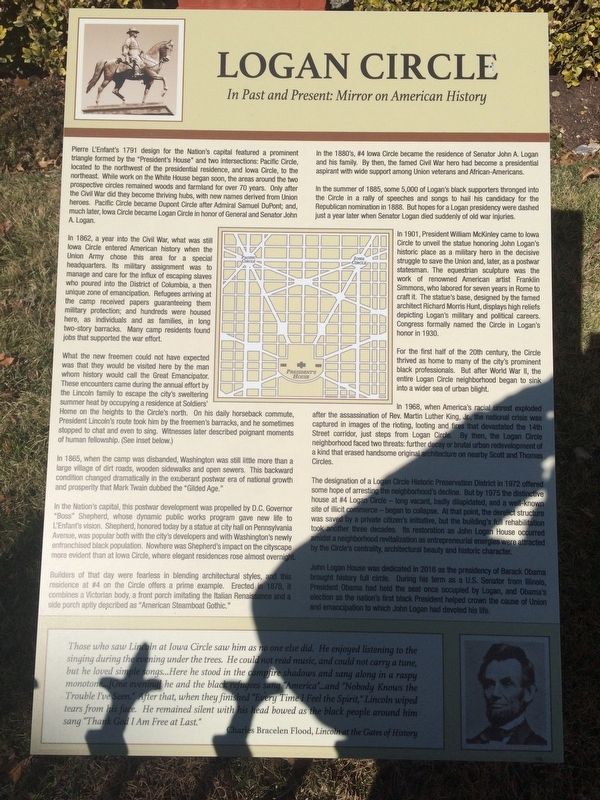 Pierre L'Enfant's 1791 design for the Nation's capital featured a prominent triangle formed by the "President's House" and two intersections: Pacific Circle, located to the northwest of the presidential residence, and Iowa Circle, to the northeast. While work on the White House began soon, the areas around the two prospective circles remained woods and farmland for over 70 years. Only after the Civil War did they become thriving hubs, with new names derived from Union heroes. Pacific Circle became Dupont Circle after Admiral Samuel DuPont; and, much later, Iowa Circle became Logan Circle in honor of General and Senator John A. Logan.

In 1862, a year into the Civil War, what was still Iowa Circle entered American history when the Union Army chose this area for a special headquarters. Its military assignment was to manage and care for the influx of escaping slaves who poured into the District of Columbia, a then unique zone of emancipation. Refugees arriving at the camp received papers guaranteeing them military protection; and hundreds were housed here, as individuals and as families, in long two-story barracks. Many camp residents 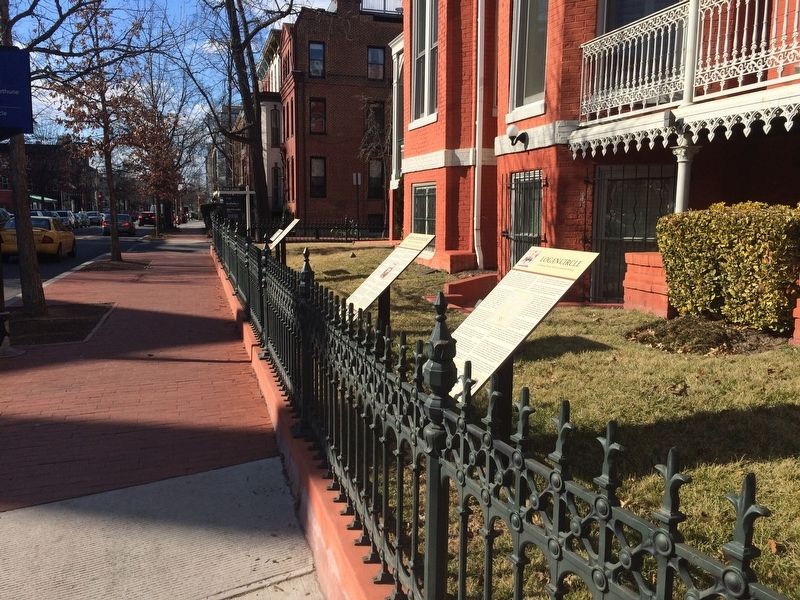 Click or scan to see
this page online
found jobs that supported the war effort.

What the new freemen could not have expected was that they would be visited here by a man whom history would call the Great Emancipator. These encounters came during the annual effort by the Lincoln family to escape the city's sweltering summer heat by occupying a residence at Soldier's Home on the heights to the Circle's north. On his daily horseback commute, President Lincoln's route took him by the freemen's barracks, and he sometimes stopped to chat and even to sing. Witnesses later described poignant moments of human fellowship. (See insert below.)

In 1865, when the camp was disbanded, Washington was still little more than a large village of dirt roads, wooden sidewalks and open sewers. This backward condition changed dramatically in the exuberant postwar era of national growth and prosperity that Mark Twain dubbed the "Gilded Age."

In the Nation's capital, this postwar development was propelled by D.C. Governor "Boss" Shepherd, whose dynamic public works program gave new life to L'Enfant's vision. Shepherd, honored today by a statue at city hall on Pennsylvania Avenue, was popular both with the city's developers and with Washington's newly enfranchised black population. Nowhere was Shepherd's impact on the cityscape more evident than at Iowa Circle, where elegant residences rose almost overnight. 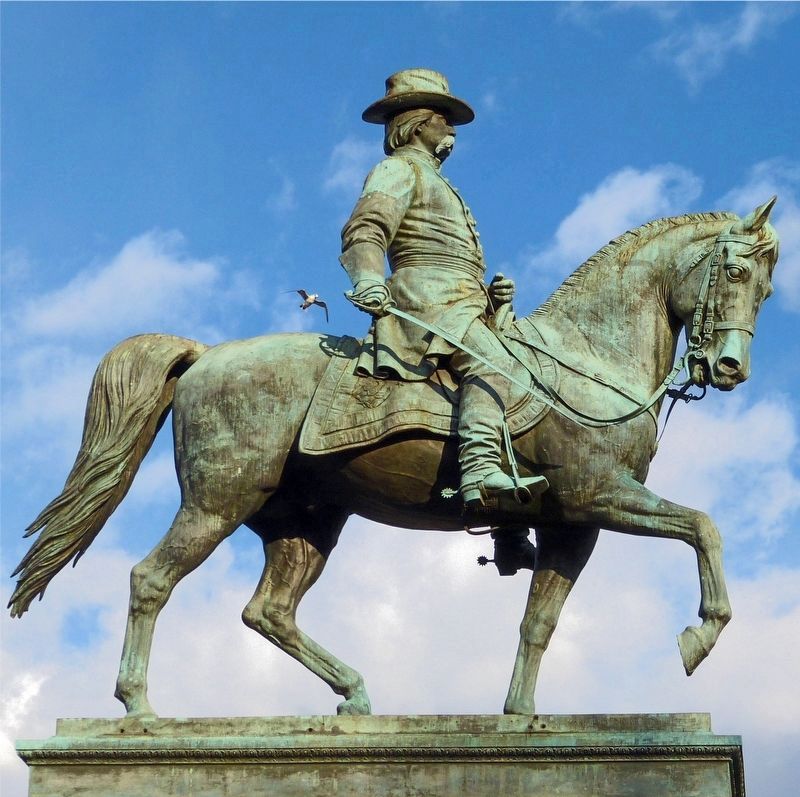 Photographed By Allen C. Browne, February 17, 2013
3. John A. Logan
Franklin Simmons' statue of John A. Logan in Logan Circle.
of that day were fearless in blending architectural styles, and this residence at #4 on the Circle offers a prime example. Erected in 1878, it combines a Victorian body, a front porch imitating the Italian Renaissance and a side porch aptly described as "American Steamboat Gothic."

In the 1880's, #4 Iowa Circle became the residence of Senator John A. Logan and his family. By then, the famed Civil War hero had become a presidential aspirant with wide support among Union veterans and African-Americans.

In the summer of 1885, some 5,000 of Logan's black supporters thronged into the Circle in a rally of speeches and songs to hail his candidacy for the Republican nomination in 1888. But hopes for a Logan presidency were dashed just a year later when Senator Logan died suddenly of old war injuries.

In 1901, President William McKinley came to Iowa Circle to unveil the statue honoring John Logan's historic place as a military hero in the decisive struggle to save the Union, and, later, as a postwar statesman. The equestrian sculpture was the work of renowned American artist Franklin Simmons, who labored for seven years in Rome to craft it. The statue's base, designed by the famed architect Richard Morris Hunt, displays high reliefs depicting Logan's military and political careers. Congress formally named the Circle in Logan's honor in 1930.

For the first half of the 20th century, the Circle thrived as home to many of the city's prominent black professionals. But after World War II, the entire Logan Circle neighborhood began to sink into a wider sea of urban blight.

In 1968, when America's racial unrest exploded after the assassination of Rev. Martin Luther King, Jr., the national crisis was captured in images of the rioting, looting and fires that devastated the 14th Street corridor, just steps from Logan Circle. By then, the Logan Circle neighborhood faced two threats: further decay or brutal urban redevelopment of a kind that erased handsome original architecture on nearby Scott and Thomas Circles.

The designation of a Logan Circle Historic Preservation District in 1972 offered some hope of arresting the neighborhood's decline. But by 1975 the distinctive house at #4 Logan Circle — long vacant, badly dilapidated, and a well-known site of illicit commerce — began to collapse. At that point, the derelict structure was saved by a private citizen's initiative, but the building's full rehabilitation took another three decades. Its restoration as John Logan House occurred amidst a neighborhood revitalization as entrepreneurial energies were attracted by the Circle's centrality, architectural beauty and historic character.

John Logan House was dedicated in 2016 as the presidency of Barack Obama brought history full circle. During his term as a U.S. Senator from Illinois, President Obama held the seat once occupied by Logan, and Obama's election as the nation's first black President helped crown the cause of Union and emancipation to which John Logan had devoted his life.

(inset)
Those who saw Lincoln at Iowa Circle saw him as no one else did. He enjoyed listening to the singing during the evening under the trees. He could not read music, and could not carry a tune, but he loved simple songs...Here he stood in the campfire shadows and sang along in a raspy monotone...[One evening] he and black refugees sang "America"...and "Nobody Knows the Trouble I've Seen." After that, when they finished "Every Time I Feel the Spirit," Lincoln wiped tears from his face. He remained silent with his head bowed as the black people around him sang "Thank God I Am Free at Last."
Charles Bracelen Flood, Lincoln at the Gates of History