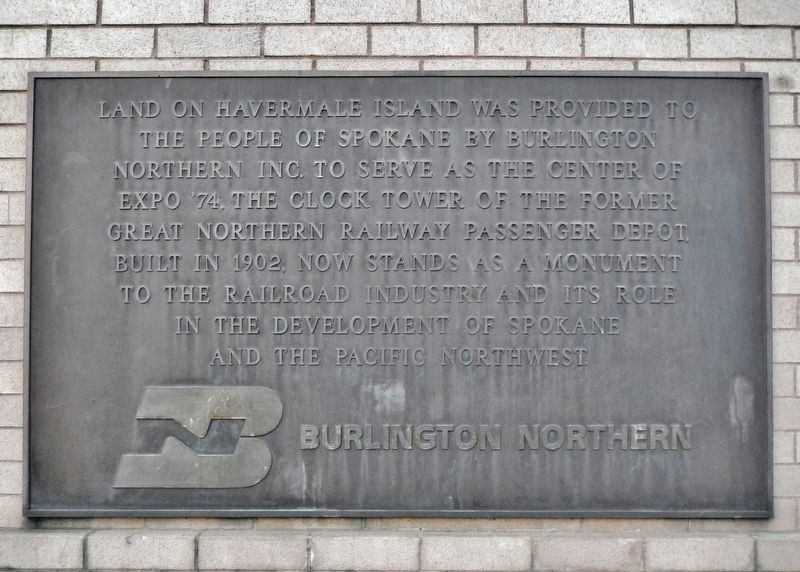 Land on Havermale Island was provided to the people of Spokane by Burlington Northern Inc. to serve as the center of Expo ’74. The Clock Tower of the former Great Northern Railway Passenger Depot, built in 1902, now stands as a monument to the railroad industry and its role in the development of Spokane and the Pacific Northwest.

Topics. This historical marker is listed in these topic lists: Industry & Commerce • Parks & Recreational Areas • Railroads & Streetcars. A significant historical year for this entry is 1902.

Location. 47° 39.689′ N, 117° 25.144′ W. Marker is in Spokane, Washington, in Spokane County. Marker can be reached from North Howard Street, 0.1 miles north of West Spokane Falls Boulevard, on the right when traveling north. Marker is mounted at eye-level, on the west side of the Great Northern Railroad Clock Tower on Havermale Island in Riverfront Park, about 1/10 mile east of North Howard Street. Touch for map. Marker is in this post office area: Spokane WA 99201, United States of America. Touch for directions.

Other nearby markers. At least 8 other markers are within walking distance of this marker. Early Spokane (about 500 feet away, measured in a direct line); 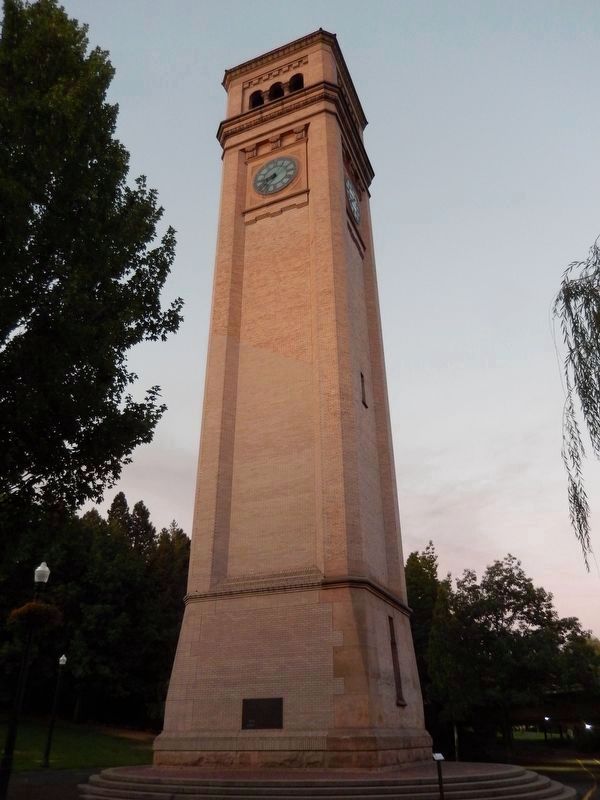 Also see . . .
1. The Great Northern Clocktower. It is one of the few surviving remnants of Havermale Island as it was from the first years of the 20th century until Expo ‘74. The major rail yards established on the banks of the Spokane River were removed to make way for Expo ‘74. Today, Riverfront Park stands where the heart of Spokane’s industry once stood. The Great Northern clock tower reminds visitors of the city’s history and its booming rails. (Submitted on August 6, 2020, by Cosmos Mariner of Cape Canaveral, Florida.)

2. Great Northern Railroad Depot Clock Tower. The four Clock faces are 9 feet across on each side, making it the largest Clock 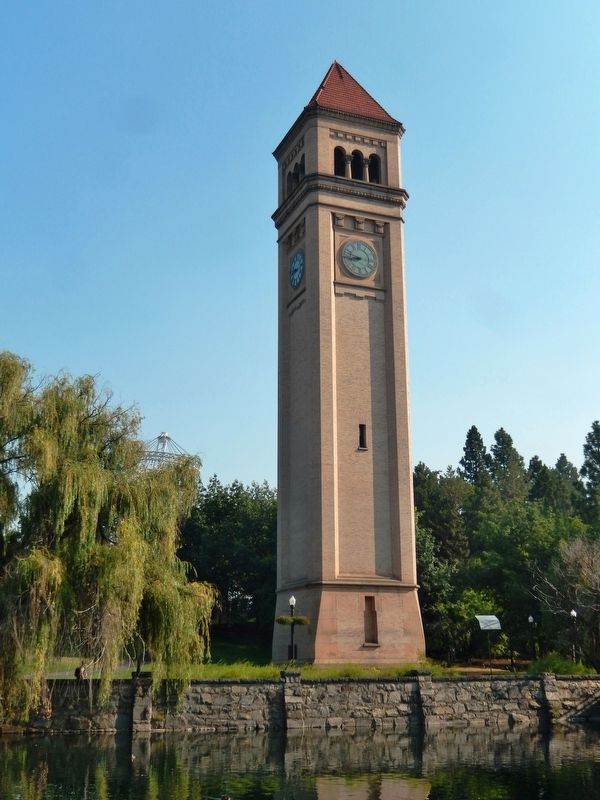 Photographed By Cosmos Mariner, August 2, 2015
3. Great Northern Railway Passenger Depot Clock Tower
(looking north from the Centennial Trail in Riverfront Park)
Tower in the West. The 8 ft. pendulum and weight which powers it weigh 500 lbs. The clock has had to be wound once a week by a hand crank. A Riverfront Park employee climbs up every week to keep it running on time. When the Riverfront Park was constructed for Expo 1974, the train station was demolished leaving the Clock Tower. (Submitted on August 6, 2020, by Cosmos Mariner of Cape Canaveral, Florida.) 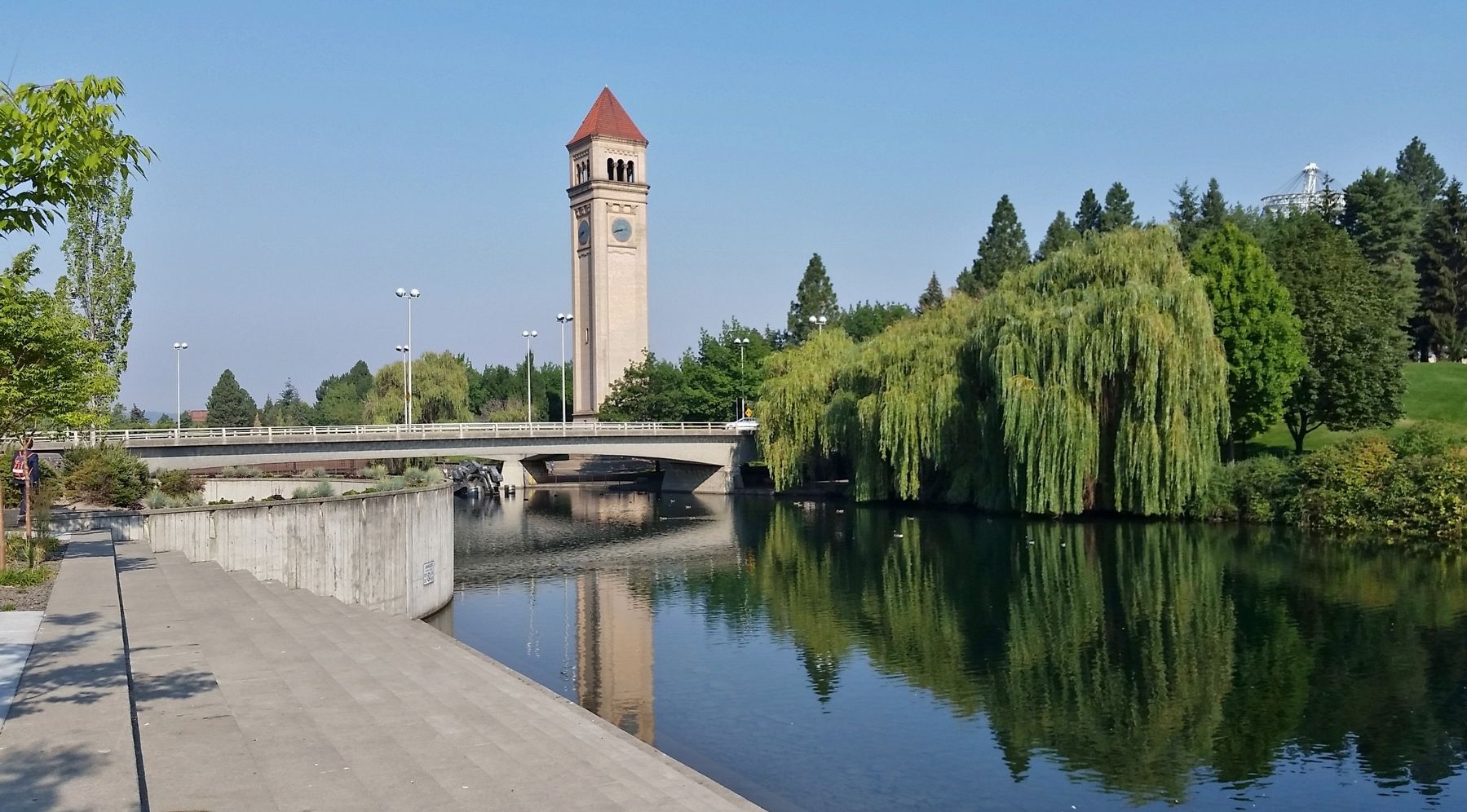