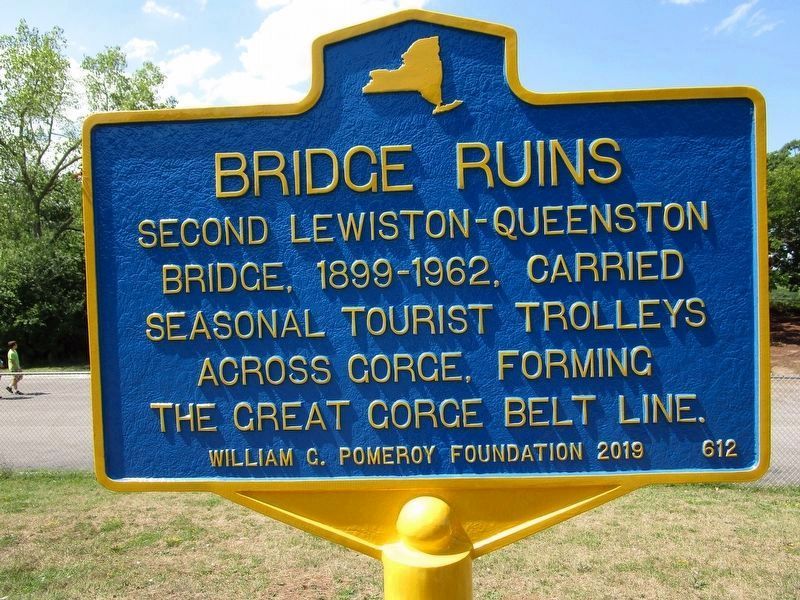 Topics and series. This historical marker is listed in these topic lists: Bridges & Viaducts • Railroads & Streetcars. In addition, it is included in the William G. Pomeroy Foundation series list. A significant historical year for this entry is 1899.

Location. 43° 9.91′ N, 79° 2.788′ W. Marker is in Lewiston, New York, in Niagara County. Marker can be reached from South 4th Street, ¾ mile south of Tuscarora Street. Marker is in Artpark State Park. From the main parking area, walk south along the road that ascends the Niagara Escarpment. Touch for map. Marker is at or near this postal address: 450 South 4th Street, Lewiston NY 14092, United States of America. Touch for directions. 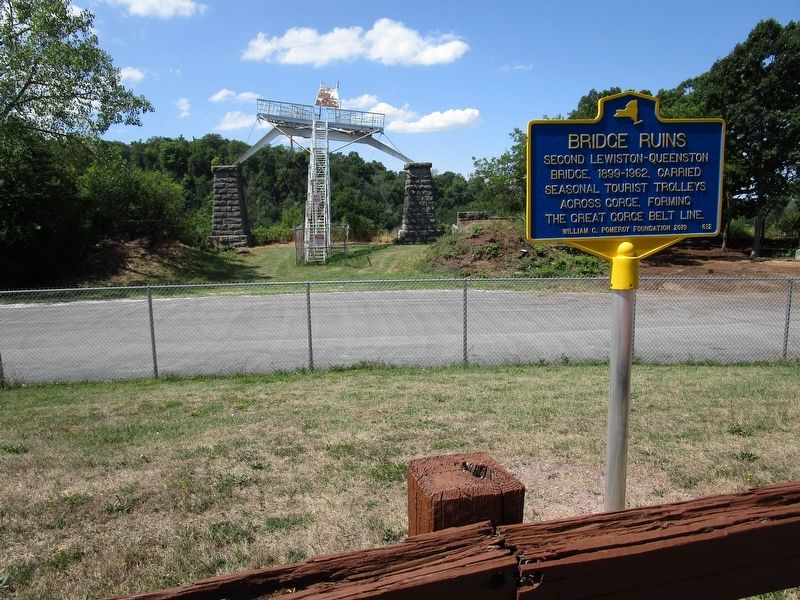 More about this marker. Artpark set the marker in 2020. The grant for the marker was solicited by the Niagara Frontier Chapter of the National Railway Historical Society from the William G. Pomeroy Foundation.

Regarding Bridge Ruins. This is not where the deck of the bridge met land. The deck ends were in the gorge. Vehicles exiting the bridge deck turned sharply at the gorge wall, traveling on a ledge leading out of the gorge. 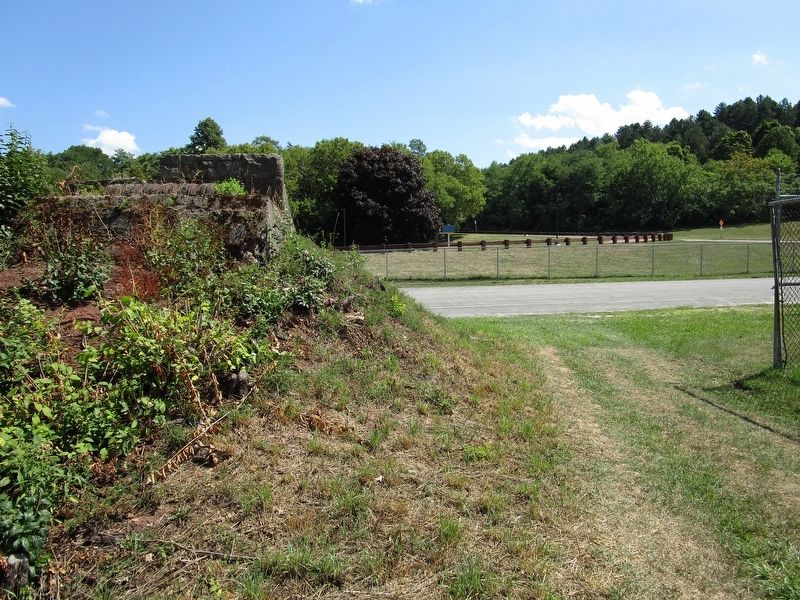 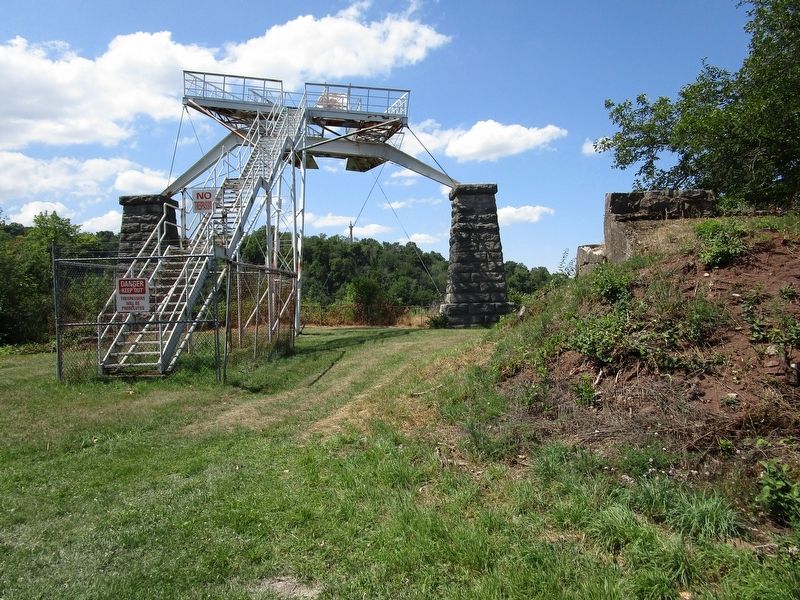 Photographed By Anton Schwarzmueller, August 8, 2020
4. Bridge Ruins
The fenced sculpture built upon the bridge towers is called Omega. The land in the background is Queenston (Queenston Heights), Ontario, Canada. Brock's Monument is in the distant background. 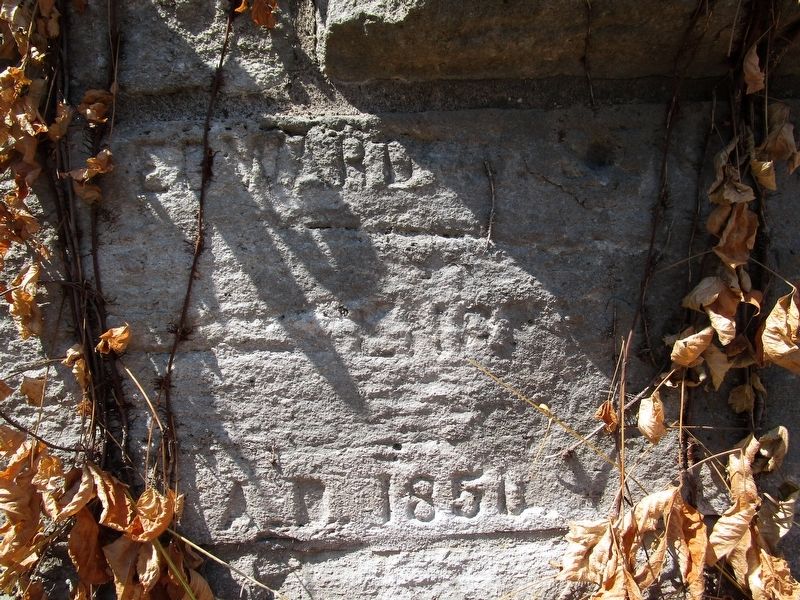 Photographed By Anton Schwarzmueller, August 8, 2020
5. Bridge Ruins Cornerstone
This cornerstone of the south tower is apparently for the first Lewiston-Queenston suspension bridge. Photographed By Anton Schwarzmueller, September 2, 2018
6. Trolley Grade
This is where the trolley tracks separated, at the north end of the Niagara Gorge. The view is northward and towards where the track switch was located, just before a bridge over a gully. The lower grade ran along and inside the gorge to Niagara Falls. The higher grade, behind the stone wall, ran to the deck of the suspension bridge, joined by the road for rubber-wheeled vehicles. The higher grade is now blocked by overgrowth and by fill from the Niagara Power Project. The lower grade has been narrowed by erosion and severed by the Project. I was able to walk it to where it had ducked under the bridge, but it is risky.
Credits. This page was last revised on May 20, 2022. It was originally submitted on August 11, 2020, by Anton Schwarzmueller of Wilson, New York. This page has been viewed 163 times since then and 35 times this year. Photos:   1, 2, 3, 4, 5, 6. submitted on August 11, 2020, by Anton Schwarzmueller of Wilson, New York.
Share this page.