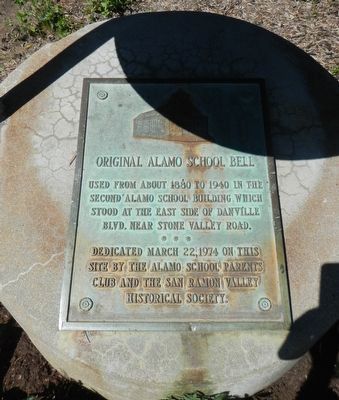 By Barry Swackhamer, April 15, 2016
1. Original Alamo School Bell Marker
Inscription.
Original Alamo School Bell. . . Used from about 1880 to 1940 in the second Alamo school building which stood at the east side of Danville Blvd. near Stone Valley Road. . This historical marker was erected in 1974 by Alamo School Parents Club and the San Ramon Valley Historical Society. It is in Alamo in Contra Costa County California

Used from about 1880 to 1940 in the second Alamo school building which stood at the east side of Danville Blvd. near Stone Valley Road.

Topics and series. This historical marker is listed in this topic list: Education. In addition, it is included in the Historic Bells 🔔 series list. 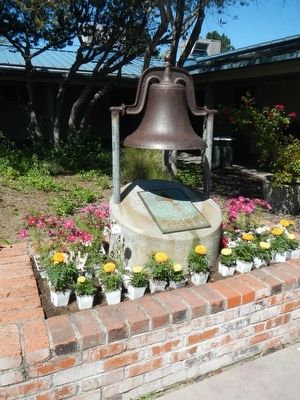 More about this marker. The bell and marker are located in the courtyard of Alamo Elementary School, at the end of Wilson Street.

Additional comments.
1.
The name on this bell shows that it could not have existed before 1894. A bell made in 1880 would have said simply "C. S. Bell," because Charles Singleton Bell did not at that point in time have any partners in his foundry. It is possible that this bell was a replacement for an older bell used by the Alamo School.
— Submitted August 17, 2020, by Carl Scott Zimmerman of Kirkwood, Missouri.
Credits. This page was last revised on August 17, 2020. It was originally submitted on April 17, 2016. This page has been viewed 248 times since then and 4 times this year. Last updated on August 17, 2020, by Craig Baker of Sylmar, California. Photos:   1, 2. submitted on April 17, 2016, by Barry Swackhamer of Brentwood, California. • J. Makali Bruton was the editor who published this page.
Share This Page.