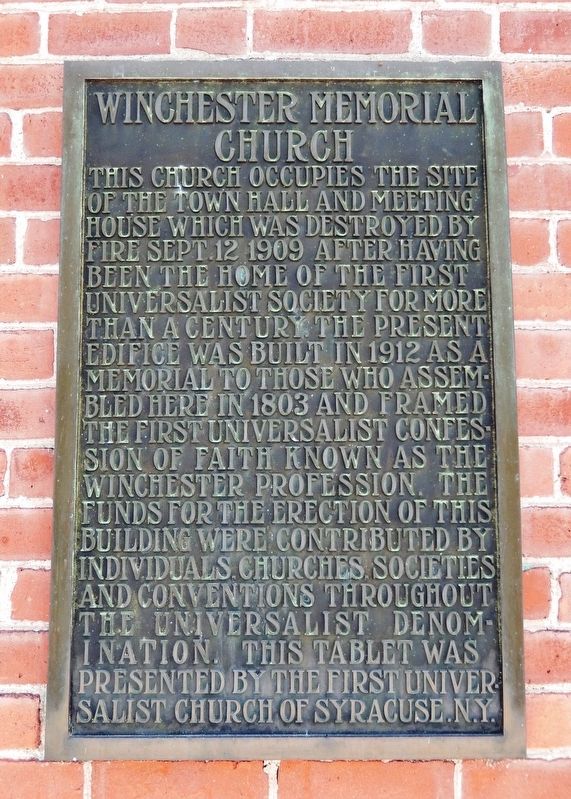 This church occupies the site of the Town Hall and Meeting House which was destroyed by fire Sept. 12, 1909 after having been the home of the First Universalist Society for more than a century. The present edifice was built in 1912 as a memorial to those who assembled here in 1803 and framed the First Universalist Confession of Faith known as The Winchester Profession. The funds for the erection of this building were contributed by individuals, churches, societies and conventions throughout the Universalist Denomination. This tablet was presented by the First Universalist Church of Syracuse, N.Y.

Location. 42° 46.396′ N, 72° 22.958′ W. Marker is in Winchester, New Hampshire, in Cheshire County. Marker can be reached from the intersection of Richmond Road (State Highway 119) and Michigan Street, on the right when traveling north. Marker is mounted at eye-level, directly on the 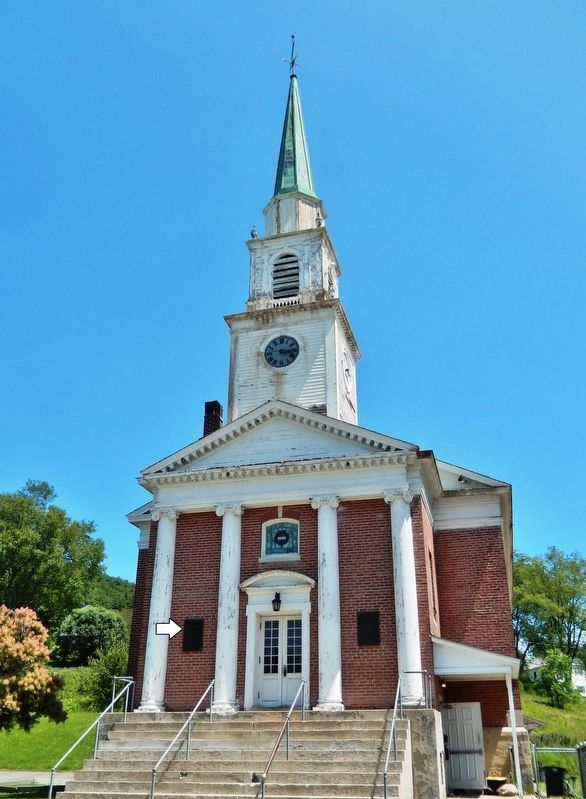 Also see . . .
1. Winchester Memorial Church (Wikipedia). The Winchester Memorial Church, also known as the New Hampshire Conservatory of Music and the Arts, is a historic civic building in the center of Winchester, New Hampshire, United States. The building was designed by S. Winthrop St. Clair and built in 1912. It is a prominent local example of Colonial Revival architecture. (Submitted on August 17, 2020, by Cosmos Mariner of Cape Canaveral, Florida.) 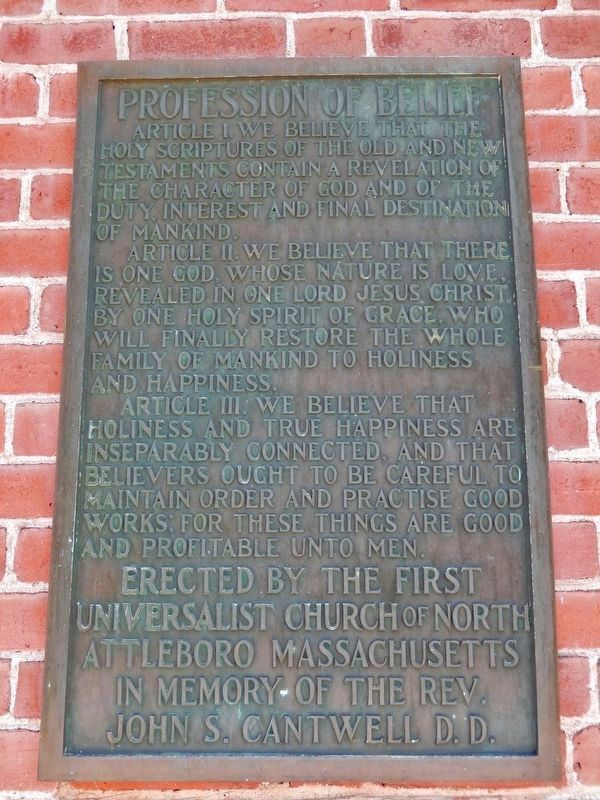 By Cosmos Mariner, July 8, 2019
3. Profession of Belief Tablet
(mounted just right of entrance)
Article I. We believe that the Holy Scriptures of the Old and New Testaments contain a revelation of the character of God and of the duty, interest and final destination of mankind.
Article II. We believe that there is one God, whose nature is love, revealed in one Lord Jesus Christ, by one Holy Spirit of grace, who will finally restore the whole family of mankind to holiness and happiness.
Article III. We believe that holiness and true happiness are inseparably connected, and that believers ought to be careful to maintain order and practice good works; for these things are good and profitable unto men.
Erected by the First Universalist Church of North Attleboro, Massachusetts in memory of the Rev. John S. Cantwell D.D. 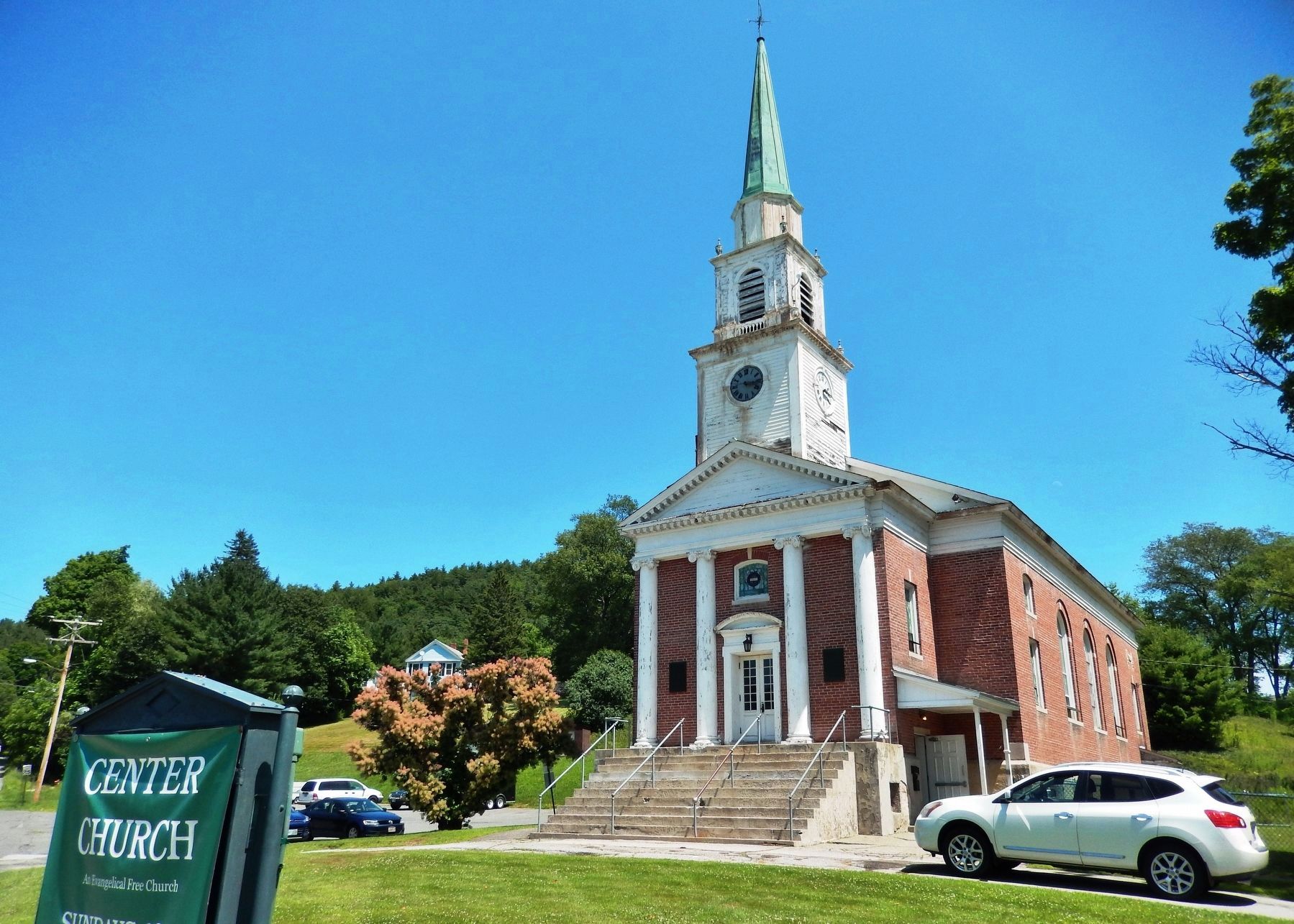