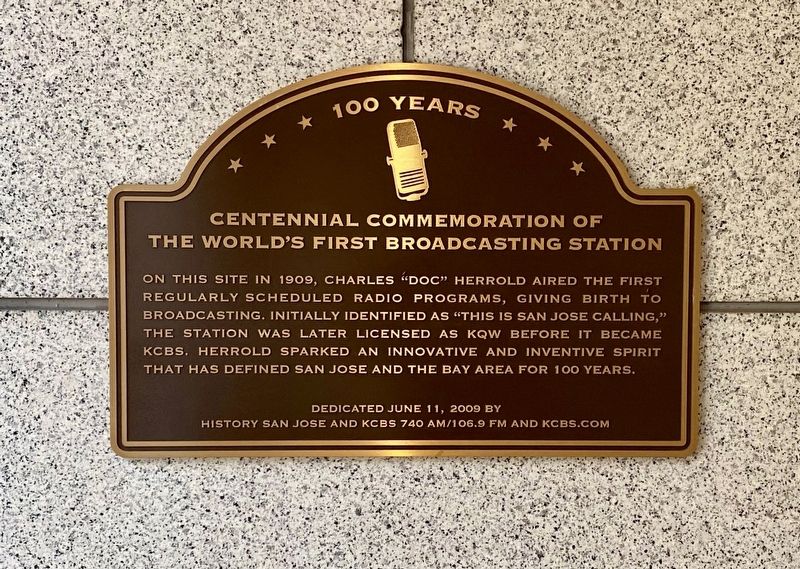 Dedicated June 11, 2009 BY History San Jose and KCBS 740 AM/106.9 FM and KCBS.COM . This historical marker was erected by History San Jose, KCBS. It is in San Jose in Santa Clara County California

On this site in 1909, Charles "Doc” Herrold aired the first regularly scheduled radio programs, giving birth to broadcasting. Initially identified as "This is San Jose calling," the station was later licensed as KQW before it became KCBS. Herrold sparked an innovative and inventive spirit that has defined San Jose and the Bay Area for 100 years.

Topics. This historical marker is listed in this topic list: Communications. A significant historical date for this entry is June 11, 1909.

Location. 37° 20.021′ N, 121° 53.352′ W. Marker is in San Jose, California, in Santa Clara County. Marker can be reached from the intersection of Fairmont Plaza and South First Street. Touch for map. Marker is at or near this postal address: 50 West San Fernando Street, San Jose CA 95113, United States of America. Touch for directions. 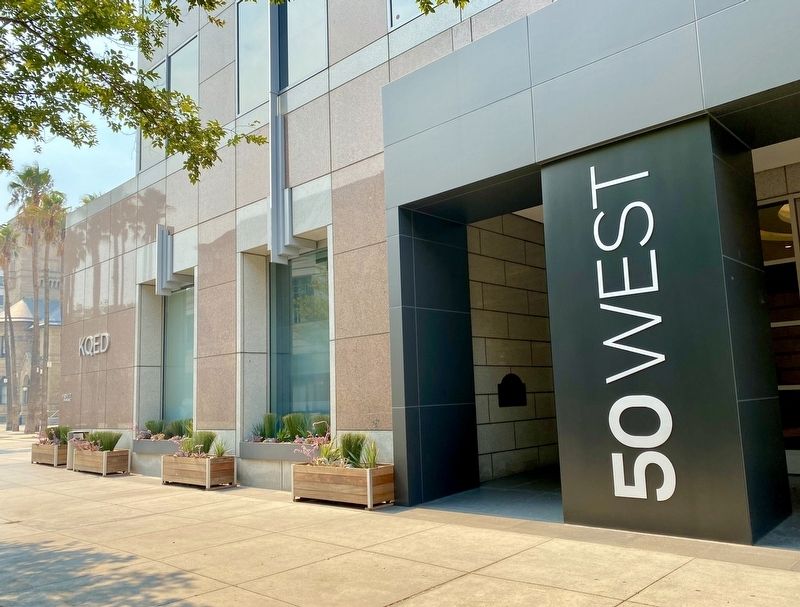 Photographed By Andrew Ruppenstein, August 19, 2020
2. Centennial Commemoration of the World's First Broadcasting Station Marker - wide view
The marker is visible here, mounted to the building wall in the alcove.

More about this marker. This marker is easy enough to find, if not readily visible. It is located by the south entrance of the 50 West San Fernando Street building ("50 West" or "KQED"), that is, the plaza side, not the street side of the building.

Also see . . .
1. Charles Herrold (Wikipedia). "Charles David "Doc" Herrold (November 16, 1875 – July 1, 1948) was an American inventor and pioneer radio broadcaster, who began experimenting with audio radio transmissions in 1909. Beginning in 1912 he apparently became the first person to make entertainment broadcasts on a regular schedule, from his station in San Jose, California." (Submitted on August 22, 2020.)