Also known as the What-Not-Shop 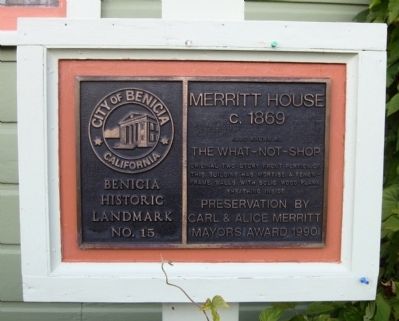 Original two story front portion of this building has mortise and tenon-frame walls with solid wood plank sheathing inside.

Topics. This historical marker is listed in this topic list: Notable Buildings. A significant historical year for this entry is 1990.

Location. Marker has been reported missing. It was located near 38° 2.862′ N, 122° 9.649′ W. Marker was in Benicia, California, in Solano County. Marker was on West D Street west of First Street, on the right when traveling west. Touch for map. Marker was at or near this postal address: 123 West D Street, Benicia CA 94510, United States of America. Touch for directions. 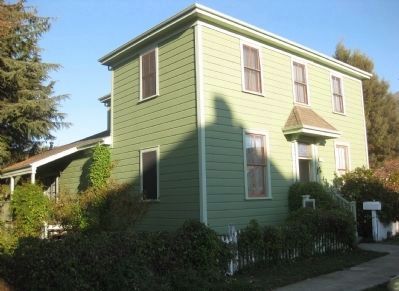 Photographed By Andrew Ruppenstein, December 25, 2009
2. Merritt House (Circa 1869 ) - View from Southwest
Per the Benicia Historical Society Historic District Brochure: Prefabricated in Maine and reassembled in its present location, the small two room annex in the rear of the building is believed to have been built here prior to 1848 and contains original chimney among its other features. Prior to its most recent renovation in 1988, this residence was called the "What Not Shop," an antique and collectibles store and is now a private residence.

More about this marker. The marker is set inside a wooden frame mounted on a wooden pole, to the left of the sidewalk leading up to the front door. This is a private residence. 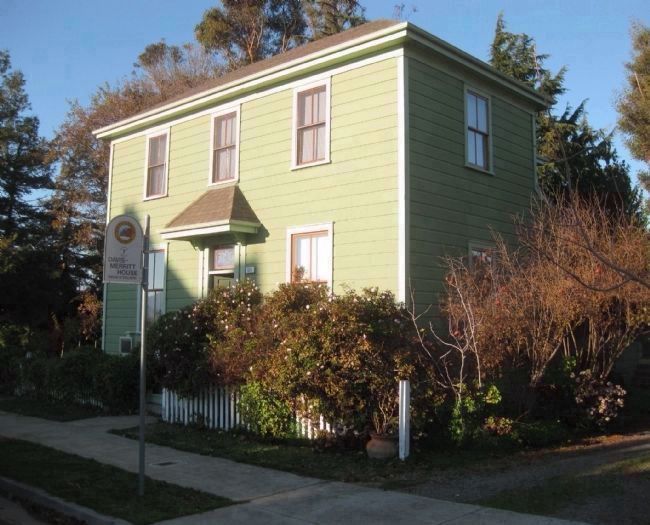 Photographed By Andrew Ruppenstein, December 25, 2009
3. Merritt House - View from Southeast
Directly in front of the house is a sign indicating that the Merritt House (aka Davis-Merritt House) is stop #7 on the Benicia Historical Society's walking tour of the historical district.
Credits. This page was last revised on August 24, 2020. It was originally submitted on December 27, 2009. This page has been viewed 1,028 times since then and 22 times this year. Last updated on August 23, 2020, by Diane Phillips of Pittsburg, California. Photos:   1, 2, 3. submitted on December 27, 2009, by Andrew Ruppenstein of Sacramento, California. • J. Makali Bruton was the editor who published this page.
Share this page.