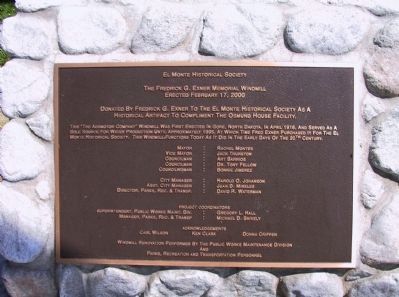 Donated by Frederick G. Exner to the El Monte Historical Society as a Historical Artifact to Compliment the Osmund House Facility.

This "The Aermotor Company" windmill was first erected in Gore, North Dakota, in April 1916, and served as a sole source for water production until approximately 1995, at which time Fred Exner purchased it for the El Monte Historical Society. This windmill functions today as it did in the early days of the 20th Century. 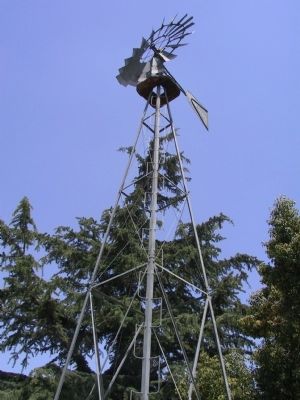 Click or scan to see
this page online
by El Monte Historical Society.

Topics. This historical marker is listed in this topic list: Industry & Commerce. A significant historical month for this entry is April 1916.

Location. 34° 4.472′ N, 118° 2.508′ W. Marker is in El Monte, California, in Los Angeles County. Marker can be reached from Santa Anita Avenue south of Valley Boulevard, on the right when traveling south. The marker and windmill are located at the Santa Fe Trail Historical Park on the southwest corner. Touch for map. Marker is at or near this postal address: 3675 Santa Anita Avenue, El Monte CA 91731, United States of America. Touch for directions.

More about this marker. The park is closed to the public and the city has no plans to reopen it. 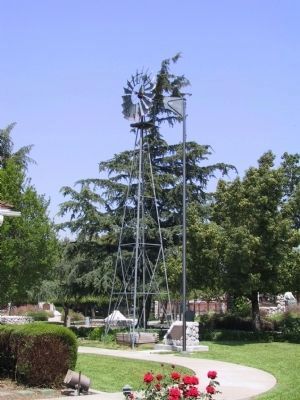 Photographed By Michael Kindig
3. The Frederick G. Exner Memorial Windmill and Marker
Credits. This page was last revised on August 27, 2020. It was originally submitted on January 3, 2012. This page has been viewed 748 times since then and 33 times this year. Last updated on August 27, 2020, by Craig Baker of Sylmar, California. Photos:   1, 2, 3. submitted on December 28, 2011, by Michael Kindig of Long Beach, California. • J. Makali Bruton was the editor who published this page.
Share this page.