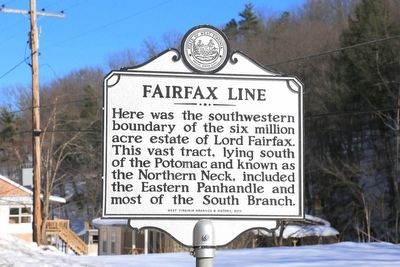 Photographed By J. J. Prats, January 30, 2016
1. Fairfax Line Marker
Inscription.
Fairfax Line. . Here was the southwestern boundary of the six million acre estate of Lord Fairfax. This vast tract, lying south of the Potomac and known as the Northern Neck, included the Eastern Panhandle and most of the South Branch. . This historical marker was erected in 2012 by West Virginia Archives and History. It is Near Petersburg in Grant County West Virginia

Here was the southwestern boundary of the six million acre estate of Lord Fairfax. This vast tract, lying south of the Potomac and known as the Northern Neck, included the Eastern Panhandle and most of the South Branch.

Topics and series. This historical marker is listed in these topic lists: Colonial Era • Settlements & Settlers. In addition, it is included in the West Virginia Archives and History series list. A significant historical year for this entry is 1737. 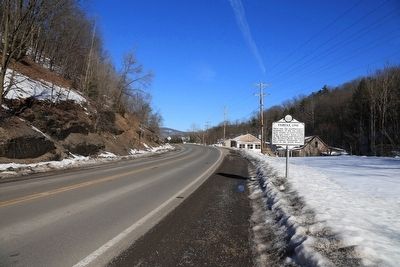 Regarding Fairfax Line. The southern boundary of the “Northern Neck Proprietary” is the Rappahannock River, the northern (and, because of its course, also its northwestern) boundary is the Potomac River, and a straight line drawn between the sources of the Rappahannock and the Potomac rivers its southwestern edge. This straight line is “the Fairfax Line.” The rivers’ sources were not known when King Charles II gave the lands to seven Englishmen. By 1710, Thomas, the sixth Lord Fairfax of Cameron, owned it all. And after a survey in 1747 that drew the Fairfax Line, its size could finally be calculated: this gift from King Charles II was in excess of 8000 square miles (almost the size of New Jersey). Thomas Fairfax, now a Virginia resident, had no children and his ownership of the Northern Neck died with him in 1781. Unsold land within the Northern Neck Proprietary reverted to the Commonwealth of Virginia. 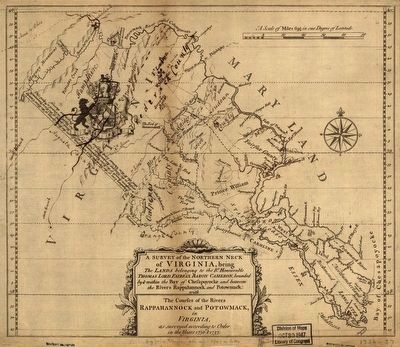 Library of Congress, approx 30 x 35 cm.
3. A Survey of the Northern Neck of Virginia
being The Lands belonging to the Right Honorable Thomas Lord Fairfax Baron Cameron, bounded by & within the Bay of Chesapoyocke and between the Rivers Rappahannock and Potowmack: with The courses of the Rivers Rappahannock and Potowmack, in Virginia, as surveyed according to Order in the Years 1836 & 1737. —Click to enlarge.—
Click here for a list of markers that are related to this marker. These markers are listed in no particular order.