Inscription on the Big Bell of the Old Cathedral 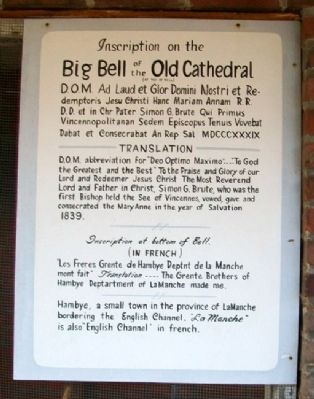 By William Fischer, Jr., January 15, 2012
1. Inscription on the Big Bell of the Old Cathedral Marker
Inscription.
Translation . D.O.M. abbreviation for "Deo Optimo Maximo"..."To God the Greatest and the Best" To the Praise and Glory of our Lord and Redeemer Jesus Christ The Most Reverend Lord and Father in Christ, Simon G. Brute, who was the first Bishop held the See of Vincennes, vowed, gave and consecrated the Mary Anne in the year of Salvation 1839. . . . This historical marker was erected by The Old Cathedral, Basilica of St. Francis Xavier. It is in Vincennes in Knox County Indiana