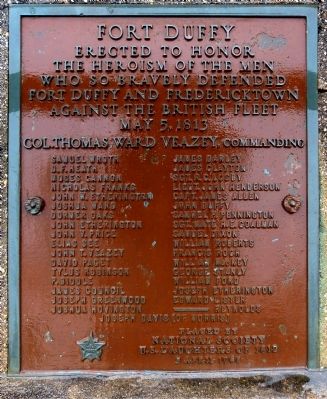 Erected to honor the heroism of the men who so bravely defended Fort Duffy and Fredericktown against the British Fleet May 5, 1813 Colonel Thomas Ward Veazey, commanding

Topics and series. This memorial is listed in this topic list: War of 1812. In addition, it is included in the United States Daughters of 1812, National Society series list. 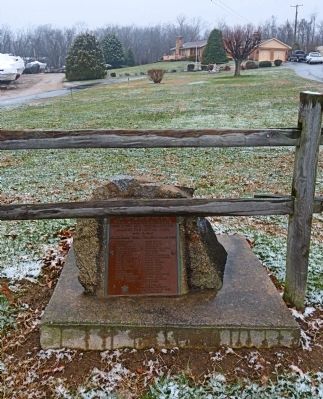 Click or scan to see
this page online
N, 75° 53.209′ W. Marker is in Fredericktown, Maryland, in Cecil County. Memorial is on School House Lane, on the right when traveling west. The marker is at the entrance of Duffy Creek Marina near 7 Schoolhouse lane at the intersection of Duffy Lane, Sassafras lane and Schoolhouse lane. Touch for map. Marker is at or near this postal address: 75 Duffy Lane, Georgetown MD 21930, United States of America. Touch for directions.

Regarding Fort Duffy. Fredericktown and Georgetown on the north (Cecil County) and South (Kent County) sides of the Sassafras River were attacked on May 5, 1813 by the British Navy. They were met with militia fire from fortifications on both sides of the river. Fort Duffy defended Fredericktown on the north side. British marines drove the militia away and burned both towns.
Thomas Ward Veazey later became the 24th Governor of Maryland.

The earthworks of Fort Duffy were destroyed in the expansion of the Skipjack marina around 1985. 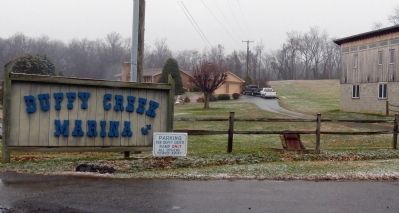 Photographed By Allen C. Browne, December 29, 2012
3. Fort Duffy Marker
Click here for a list of markers that are related to this marker. These three markers deal with the British attack on Georgetown and Fredericktown in 1813 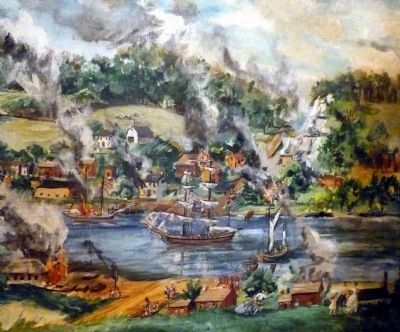