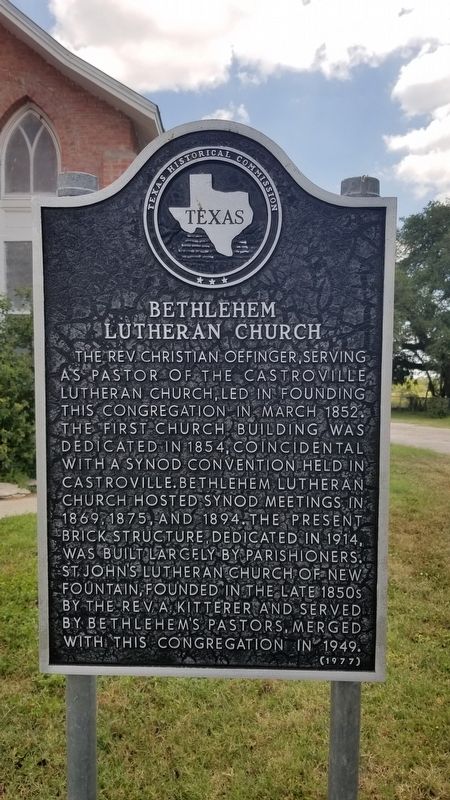 The Rev. Christian Oefinger, serving as pastor of the Castroville Lutheran Church, led in founding this congregation in March 1852. The first church building was dedicated in 1854, coincidental with a synod convention held in Castroville. Bethlehem Lutheran Church hosted synod meetings in 1869, 1875, and 1894. The present brick structure, dedicated in 1914, was built largely by parishioners. St. John's Lutheran Church of New Fountain, founded in the late 1850s by the Rev. A. Kitterer and served by Bethlehem's pastor, merged with this congregation in 1949. 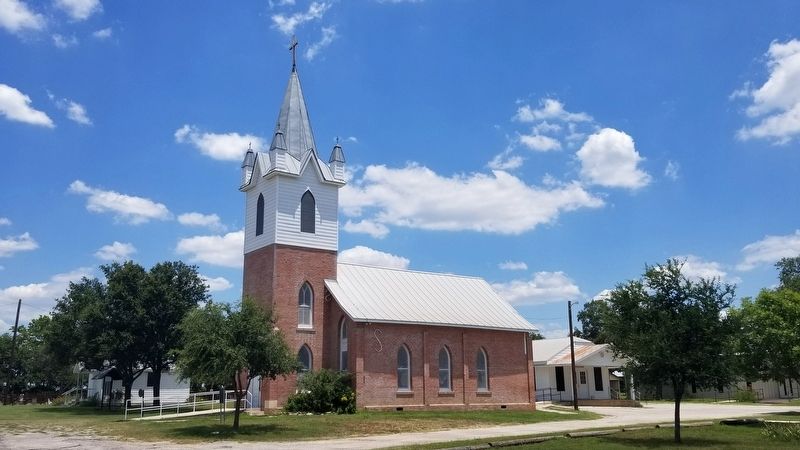 Other nearby markers. At least 8 other markers are within 6 miles of this marker, measured as the crow flies. A different marker also named Bethlehem Lutheran Church (a few steps from this marker); Quihi Bethlehem Lutheran Church Cemetery (within shouting distance of this marker); General Woll's Road (about 600 feet away, measured in a direct line); Town of Quihi (approx. ¼ mile away); New Fountain United Methodist Church (approx. 1.8 miles away); Early New Fountain Community (approx. 1.8 miles away); Masonic Cemetery (approx. 3½ miles away); Vandenburg (approx. 5½ miles away). Touch for a list and map of all markers in Quihi. 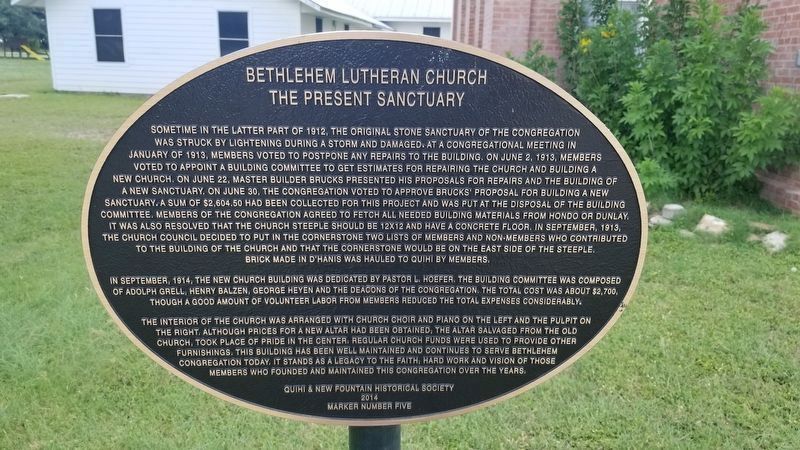 Photographed By James Hulse, June 14, 2020
3. An additional Bethlehem Lutheran Church Marker
Bethlehem Lutheran Church
The present sanctuary
Sometime in the latter part of 1912, the original stone sanctuary of the congregation was struck by lightening during a storm and damaged. At a congregational meeting in January of 1913, members voted to postpone any repairs to the building. On June 2, 1913, members voted to appoint a building committee to get estimates for repairing the church and building a new church. On June 22, master builder Brucks presented his proposals for repairs and the building of a new sanctuary. On June 30, the congregation voted to approve Brucks' proposal for building a new sanctuary. A sum of $2,604.50 had been collected for this project and was put at the disposal of the building committee. Members of the congregation agreed to fetch all needed building materials from Hondo or Dunlay. It was also resolved that the church steeple should be 12 x 12 and have a concrete floor. In September, 1913, the church council decided to put in the cornerstone two lists of members and non-members who contributed to the building of the church and that the cornerstone would be on the east side of the steeple. Brick made in D'hanis was hauled to Quihi by members.

In September, 1914, the new church building was dedicated by pastor L. Hoefer. The building committee was composed of Adolph Grell, Henry Balzen, George Heyen and the deacons of the congregation. The total cost was about $2,700, though a good amount of volunteer labor from members reduced the total expenses considerably.

The interior of the church was arranged with church choir and piano on the left and the pulpit on the right, although prices for a new altar had been obtained; the altar salvaged from the old church, took place of pride in the center. Regular church funds were used to provide other furnishings. This building has been well maintained and continues to serve Bethlehem congregation today. It stands as a legacy to the faith, hard work and vision of those members who founded and maintained this congregation over the years.
Quihi & New Fountain Historical Society
2014
Marker number five 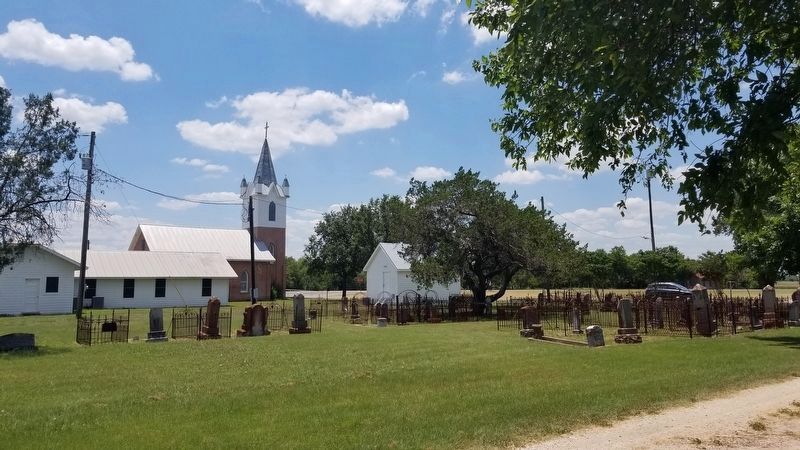 Photographed By James Hulse, June 14, 2020
4. A view of the Church, Chapel and Cemetery 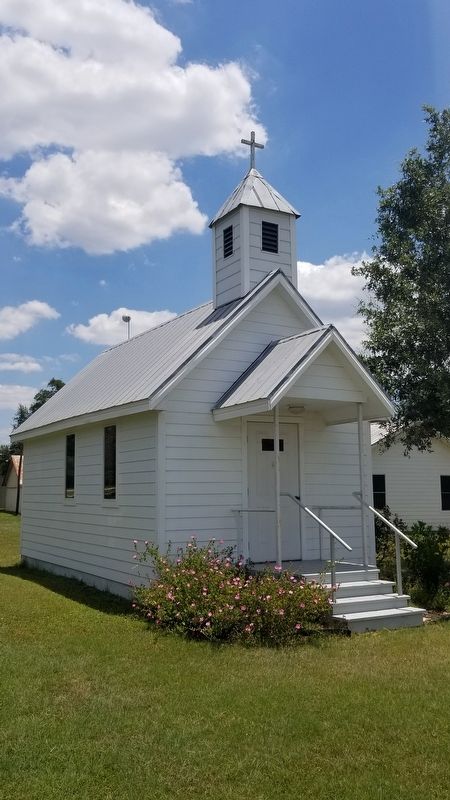