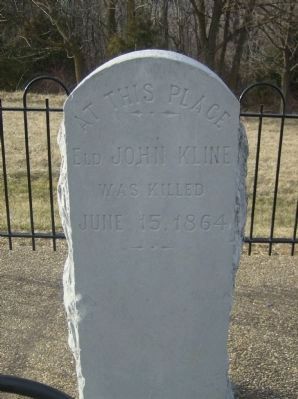 (Front of Monument):
At This Place
Eld John Kline
Was Killed
June 15, 1864
(Reverse of Monument):
Erected in the Year 1914
In Memory of Elder John Kline
A Peace Martyr
This parcel of ground,
10 feet square, is se-
cured by deed and
is on record.

Topics. This historical marker monument is listed in this topic list: War, US Civil. A significant historical month for this entry is June 1460.

Location. 38° 36.855′ N, 78° 51.022′ W. Marker is near Broadway, Virginia, in Rockingham County. Marker is on Pratt Lane, on the right when traveling west. From Brocks Gap Road (Rt. 259), turn on Hisers Lane. Follow Hisers Lane for approximately 2.2 miles to Pratt Dr. and turn right. Pratt Dr. is very uneven, graveled and is somewhat of a climb. Follow Pratt for .4 miles. A crude wooden sign ("John Kline Memorial... John Kline Memorial Parking") will be seen on the right directing you to the actual site of the monument, which is in a field to the right, approximately 70 yards from the gravel road. Touch for map 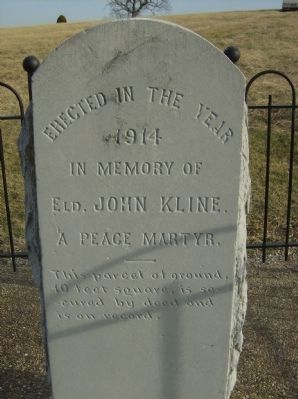 Click or scan to see
this page online
. Marker is in this post office area: Broadway VA 22815, United States of America. Touch for directions.

His passion for non-resistence prompted Elder Kline to write to Governor Letcher of Virginia and legislators John Hopkins, John C. Woodson and Charles Lewis, explaining the faith and disciplines of the Brethren, as well as the Mennonites. He feared a draft would force these peace people of the Shenandoah Valley to violate or compromise their faith. So he appealed for an exemption from military service. His efforts succeeded in the Exemption Act passed March 29, 1862, for anyone who is “bona fide prevented from bearing arms, by the tenets of the church to which said applicant belongs,” including 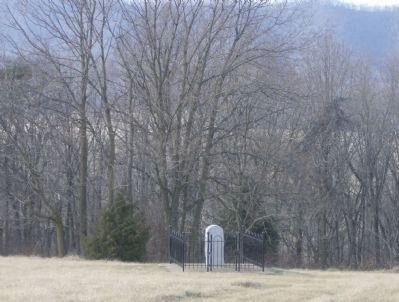 By Robert H. Moore, II, January 23, 2009
3. Elder John Kline Monument Marker
a payment of $500 plus 2% of the assessed value of the applicant’s taxable property. These exemption fees Elder Kline helped to raise, paying many from his own resources. He led the renewal of similar exemption efforts when Virginia seceded from the Union and the Confederate Congress did not recognize previous Virginia Legislature actions. Just after this, John Kline would be imprisoned with other Brethren and Mennonite leaders in the jury room of the Rockingham County courthouse on April 5, 1862, because of their opposition to the war. 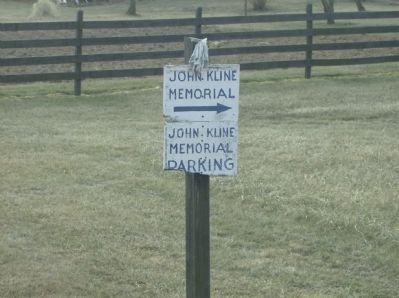