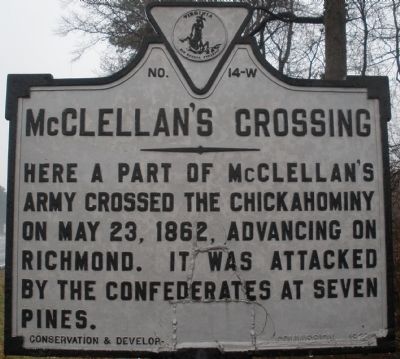 By Bernard Fisher, January 28, 2009
1. McClellan's Crossing Marker
Inscription.
McClellan's Crossing. . Here a part of McClellan's army crossed the Chickahominy on May 23, 1862, advancing on Richmond. It was attacked by the Confederates at Seven Pines. . This historical marker was erected in 1927 by Conservation and Development Commission. It is Near Quinton in New Kent County Virginia

Here a part of McClellan's army crossed the Chickahominy on May 23, 1862, advancing on Richmond. It was attacked by the Confederates at Seven Pines.

Topics. This historical marker is listed in this topic list: War, US Civil. A significant historical month for this entry is May 1862.

Location. Marker has been reported missing. It was located near 37° 30.865′ N, 77° 12.409′ W. Marker was near Quinton, Virginia, in New Kent County. Marker was on East Williamsburg Road (U.S. 60) 0.1 miles from White Oak Road, on the right when traveling east. Touch for map. Marker was in this post office area: Quinton VA 23141, United States of America. Touch for directions. 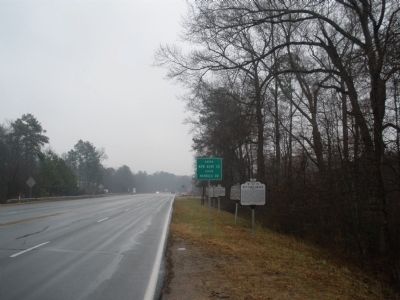 Click or scan to see
this page online
(about 700 feet away, measured in a direct line); Elko Community Center (approx. 1½ miles away); Antioch Baptist Church (approx. 2.2 miles away). Touch for a list and map of all markers in Quinton. 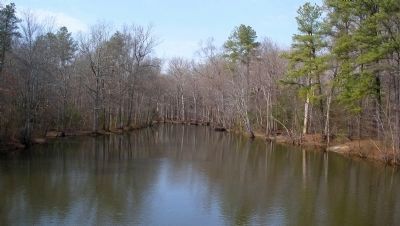