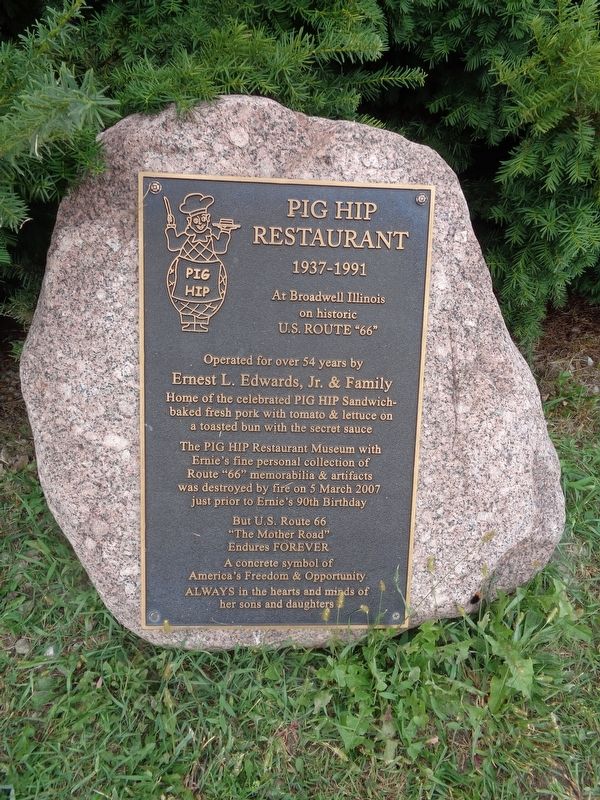 Photographed By Jason Voigt, September 27, 2020
1. Pig Hip Restaurant Marker
Inscription.
Pig Hip Restaurant. Operated for over 54 years by Ernest L. Edwards, Jr. and Family, Home of the celebrated Pig Hip Sandwich - baked fresh pork with tomato and lettuce on a toasted bun with the secret sauce, The Pig Hip Restaurant Museum with Ernie's fine personal collection of Route "66" memorabilia and artifacts was destroyed by fire on 5 March 2007 just prior to Ernie's 90th Birthday, But U.S. Route 66 "The Mother Road" Endures Forever, A concrete symbol of America's Freedom and Opportunity, Always in the hearts and minds of her sons and daughters . This historical marker was erected in 2007. It is in Broadwell in Logan County Illinois

Operated for over 54 years by Ernest L. Edwards, Jr. & Family

Always in the hearts and minds of her sons and daughters 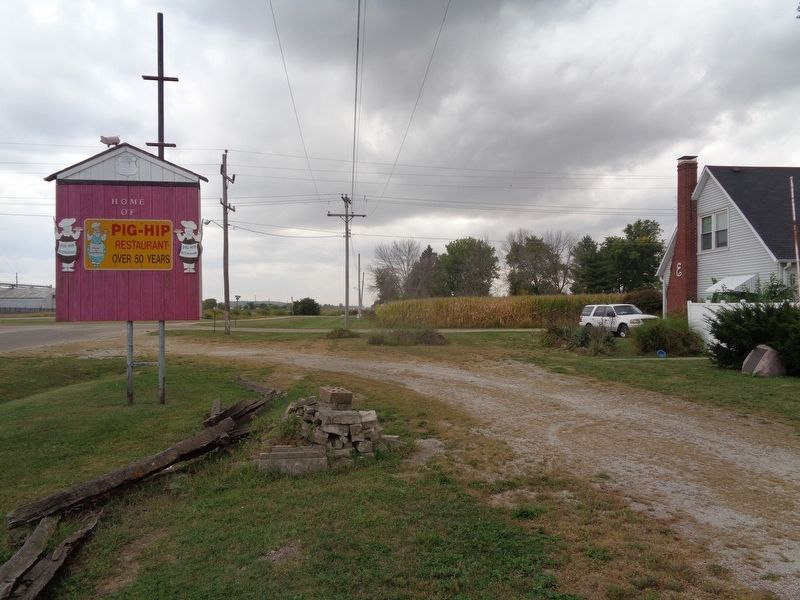 Photographed By Jason Voigt, September 27, 2020
2. Pig Hip Restaurant Marker
The sign (which was saved and restored in 2012 as a memory to Ernie Edwards) is in front of the marker.

Regarding Pig Hip Restaurant. During and after the "Mother Road's" existence, Ernie Edwards' Pig-Hip Restaurant was one of the most popular restaurants and tourist stops in central Illinois. Edwards (1917-2012) bought the restaurant at age 24 when it was known as Wolf's Inn. He would change the name to Harbor Inn, because of the restaurant's wallpaper. Edwards would make it a chicken-and-beer stand for many years, until finally he would make pig-hip sandwiches. He is quoted by saying that "the ham comes from the left hip, never the right hip". As the marker says, Edwards would live to see his landmark restaurant burn down. Famous customers who visited the Pig-Hip Restaurant include former U.S. President Jimmy Carter and Arnold Palmer.
Credits. This page was last revised on September 27, 2020. It was originally submitted on September 27, 2020, by Jason Voigt of Glen Carbon, Illinois. This page has been viewed 157 times since then and 43 times this year. Photos:   1, 2. submitted on September 27, 2020, by Jason Voigt of Glen Carbon, Illinois.
Share this page.