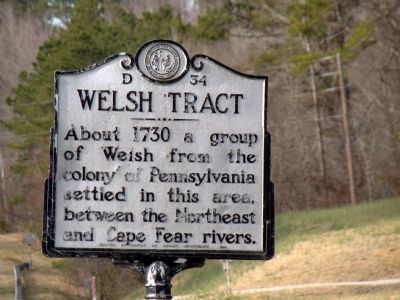 Photographed By J. J. Prats, February 27, 2010
1. Welsh Tract Marker
Inscription.
Welsh Tract. . About 1730 a group of Welsh from the colony of Pennsylvania settled in this area, between the Northeast and Cape Fear rivers. . This historical marker was erected in 1948 by Archives, Conservation and Highway Departments. It is Near Wallace in Pender County North Carolina

About 1730 a group of Welsh from the colony of Pennsylvania settled in this area, between the Northeast and Cape Fear rivers.

Topics and series. This historical marker is listed in these topic lists: Colonial Era • Settlements & Settlers. In addition, it is included in the North Carolina Division of Archives and History series list. A significant historical year for this entry is 1730. 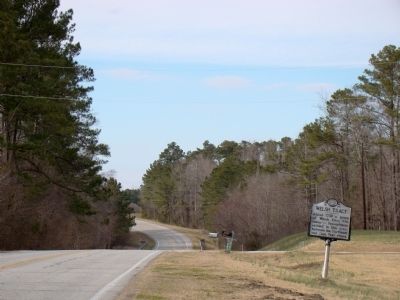 Also see . . .  What was the Welsh Tract?. 2009 article by Ben Steelman in the StarNews. Excerpt: “Instead of migrating as a group, the settlers seem to have picked up their land grants separately. Among these was Hugh Meredith, a former printer for Benjamin Franklin in Philadephia, who headed south to join relatives. Franklin’s Pennsylvania Gazette included detailed accounts of the settlement — probably written by Meredith, in its numbers 129 and 130, appearing in April and May 1731. The big draw appears to have been generous bounties from the British Parliament to those willing to go into the naval stores industry (tar, pitch and turpentine). Certainly, the region had plenty of pine trees that could be tapped for naval stores.” (Submitted on May 4, 2010, by J. J. Prats of Powell, Ohio.)
Credits. This page was last revised on September 30, 2020. It was originally submitted on May 4, 2010. This page has been viewed 1,004 times since then and 88 times this year. Last updated on September 29, 2020, by Carl Gordon Moore Jr. of North East, Maryland. Photos:   1, 2. submitted on May 4, 2010, by J. J. Prats of Powell, Ohio. • J. Makali Bruton was the editor who published this page.
Share this page.