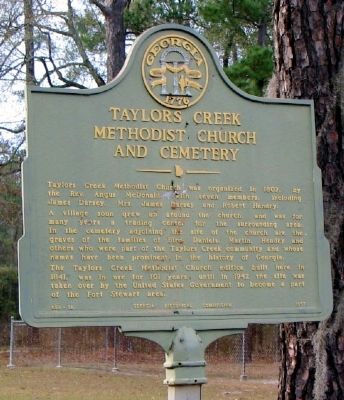 Taylors Creek Methodist Church was organized in 1807, by the Rev. Angus McDonald, with seven members, including James Darsey, Mrs. James Darsey, and Robert Hendry. A village soon grew up around the church, and was for many years a trading center for the surrounding area. In the cemetery adjoining the site of the church are the graves of the families of Bird, Daniels, Martin, Hendry and others who were part of the Taylors Creek community and whose names have been prominent in the history of Georgia.

The Taylors Creek Methodist Church edifice built here in 1841, was in use for 101 years, until in 1942 the site was taken over by the United States Government to become a part of the Fort Stewart area.

Topics and series. This historical marker is listed in these topic lists: Cemeteries & Burial Sites • Churches & Religion • War, World II. In addition, it is included in the Georgia Historical Society series list. A significant historical year for this entry is 1807. 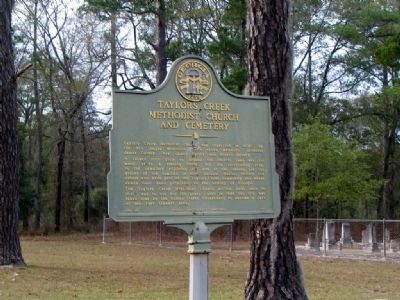 Photographed By David Seibert, January 25, 2007
2. Taylors Creek Methodist Church and Cemetery Marker
The cemetery can be seen to the right.

Click or scan to see
this page online
N, 81° 38.859′ W. Marker is near Hinesville, Georgia, in Liberty County. Marker is on Fort Stewart Road FS144, 0.2 miles west of Georgia Route 119, on the right when traveling west. The marker is located in a training area on Fort Stewart Military Installation. Touch for map. Marker is in this post office area: Fort Stewart GA 31315, United States of America. Touch for directions.

Regarding Taylors Creek Methodist Church and Cemetery. Taylors Creek was named for the Taylor brothers, James and William, who obtained land grants in 1760 on the banks of the creeks in this area. The community was one of the earliest settlements in Liberty County. Robert Hendry, whose family is mentioned on the marker, was a hero in the Revolutionary War.

The community had a school, Liberty Institute, and a tile-covered tabernacle, with small wooden cottages for church members. The community was in decline by the end of the 19th century, but the school and church continued until the government purchased the area in 1941 for Fort Stewart. Only the cemetery remains today.