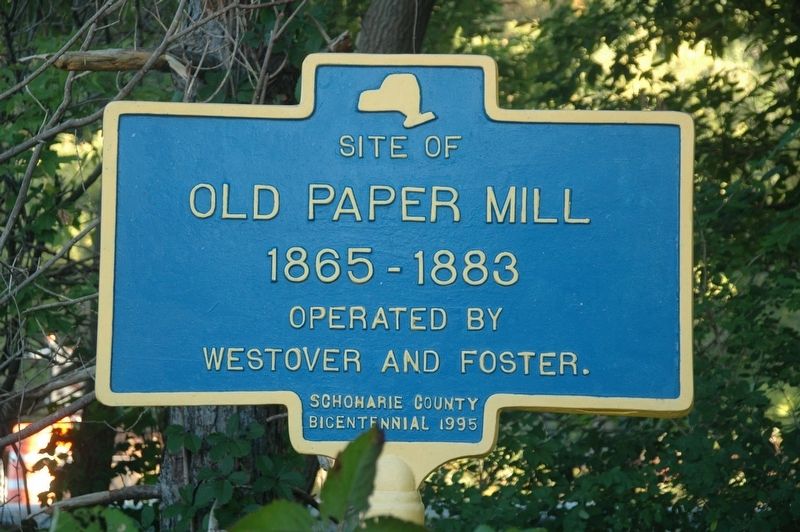 Topics. This historical marker is listed in this topic list: Industry & Commerce. A significant historical year for this entry is 1865.

Other nearby markers. At least 8 other markers are within 3 miles of this marker, measured as the crow flies. 2 Richmondville Seminaries (about 800 feet away, measured in a direct line); Geo. Dox Tavern (approx. 0.2 miles away); Hon. John Westover Residence (approx. 0.3 miles away); Grist Mill (approx. half a mile away); Old Covered Bridge (approx. 1½ miles away); John Richmond (approx. 1.6 miles away); Battle of Cobleskill 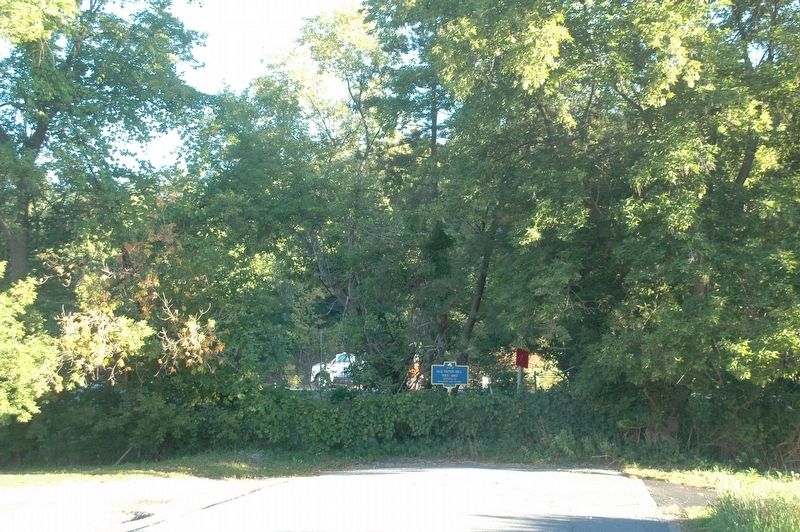 Photographed By Howard C. Ohlhous, September 19, 2020
2. Old Paper Mill Marker
The marker is at the dead end of Holmes Street, where the street was cut off by the construction of I-88.

Click or scan to see
this page online
(approx. 2 miles away); Warnerville Union Literary Seminary (approx. 2.7 miles away). Touch for a list and map of all markers in Richmondville.

Regarding Old Paper Mill. "The Paper Mill of Westover & Foster, at Richmondville, is run by a 55 horse power engine, employs 14 hands and manufactures about 400 tons of paper annually." "a paper mill for making straw wrapping paper," - Gazetteer and Business Directory of Schoharie County, N.Y. (1872) by Hamilton Child

"The Paper Mill of Westover & Foster, at Richmondville, is run by a 55 horse power engine, employs 14 hands and manufactures about 400 tons of paper annually." - Gazetteer and business directory of Schoharie County, N. Y. for 1872-3.

"The first industry that strikes our notice is the paper Mills, near the depot. These mills are owned by Messrs. Westover and Foster, and in the event of water failing, can be run by steam. They are at present conducted by T. B. Fox, and some three hundred reams of straw wrapping paper are turned out daily." The Albany Evening Journal: Friday Evening, Sept 10, 1875

Obituary
The Hon. John Westover, aged ninety-two years, a prominent and respected citizen of Richmondville, Schoharie county, died Thursday. He was the owner of nearly one-half of the village property, and the president and leading financier of the Richmondville bank. He had held many offices of public trust, having filled the position of justice of the peace for thirty-eight years and the office of assistant judge of the court of common pleas for eight years. In 1853 he was elected to the assembly, where he turned his attention and labors toward the building of the Albany and Susquehanna railroad, in which he became a director and one of the managing spirits in its construction. His funeral will be held from his late residence to-morrow afternoon.
- Published in the Troy Daily Times, Saturday Afternoon, May 21, 1887


Obituary.
The Hon. John Westover of Richmondville, Schoharie county, was buried to-day. His funeral was attended by one of the largest assemblages ever congregated at such a service within the county. An extra train brought from Albany and other nearer by stations, many of his distinguished associates, and friends, to pay their respects at the last ceremonies of the honored dead.

A sermon was preached from the 4th verse of the 46th chapter of Isaiah, "And even in your old age I am he; and even in hoar [gray] hairs will I carry you; I have made and I will bear; even I will carry, and will deliver you."

From such a text, which was a sermon of itself, the eloquent and pathetic words of the speaker could not fail to make a lasting impression upon such an assemblage.

Judge Westover had for seventy-nine years been a resident of Richmondville. He was born in Egermont, Berkshire county, Mass., July 8th, 1797. Had his live been spared until July 8th, his years would have numbered ninety. His parents moved to Richmondville while it was still a forest; and during his days he has known all the hardships and privations incident to early pioneer life.

In 1824 he purchased a portion of the estate upon which for more than sixty years he has resided; and at the residence so long ago by him, his funeral was held.

No better proof of the confidence reposed in him by his townsmen need be named, than that for thirty-eight years he was Justice of the Peace in his town. He was appointed Judge of the Court of Common Pleas in 1838, which office he held until the adoption of the new State Constitution in 1846.

In 1843 he was chosen by his county to the legislature of the State. For several terms he was supervisor of his town, and one of the most efficient directors of the A. & S. R. R. [Albany & Susquehanna Rail Road] from its reorganization until his death.

He was one of the members of the Howe's Cave Lime and Cement Company, which was organized in 1876, which office was annually thereafter conferred upon him, and which he held at the time of his death. His associate members of the company were present at his funeral to mingle their tears of love and sympathy with those of his other true friends.

He was married to Catharine, daughter of Benjamin Miles of Schoharie, in 1832, with whom he lived and pleasantly enjoyed their mutual confidence and prosperity, until she was removed by death January, 1881.

They had no children, and his large estate, the accumulations of so many years of unremitting industry, will no doubt contribute for all future time to the good of the people, in advancing education and adding perpetually to the diffusion of human knowledge.

Among his latest enterprises was his establishment of the Richmondville Bank in 1881, of which he was president. His superior sagacity seemed to make all of his undertakings peculiarly successful. His estate is estimated by his neighbors at all sums from $150,000 to $500,000. An intermediate sum, between the two extremes, being doubtless nearer the true estimate.

His life and his success was one continued lesson to all living, of what may be accomplished by individual efforts of industry, frugality and honesty, well directed labor. His examples of untiring, persevering industry should ever stand as an evidence of the possibilities within the rad of all, by like well directed persevering toil.

Few men are more missed at death than will be the subject of this brief sketch. Few have lived who have more honorably, worthily, or successfully filled their various position and mission of life. Few indeed have a purer record, or a more unsullied reputation, as a legacy behind them. His memory will be blessed. H. Baker. May 12(?) 1887.
- Published in The Otsego Farmer, May 28th, 1887 on page 8

---The treasurer of Clinton Liberal Institute recently received from the executor of the late Judge Westover, of Richmondville, Schoharie county, a draft for $10,000, the amount of their testator's bequest to the institution.
-Canajoharie, Sept. 19, 1889.

---The rest of the real estate of the late Judge Westover was sold at auction Tuesday afternoon and was bought principally by the heirs. Low Prices prevailed. - Albany Morning Express, Thursday, July 11, 1889

James M. Foster, of Richmondville, died Sept. 19th of cancer of the stomach, aged 63 years. The funeral services were held in the late residence of the deceased this day at 1 p.m., Rev W. W. Eaton, of the M.E. church officiating. A wife, Mrs. Laura Jane Dickinson, survives him, as also does a little grand daughter, surviving child of Mrs. K.E. Lewis of Utica.

In the death of Mr. Foster Schoharie County loses one of its representative citizens and Richmondville one of its best residents. Deceased was born on the Foster farm, located near the Seward town line. He received the advantages of a common school education. Beginning an active, useful and successful career, he engaged in mercantile business for a number of years at East Worcester with K. Thurber as partner. He finally moved to Richmondville and rapidly developed marked business qualification. He took interest in the construction of the "A & S" [Albany & Susquehanna] rail road, and acted as ticket agent at Central Bridge and later to the same capacity at Richmondville, in combination with the late Judge Westover. He opened and operated a paper mill. He was Vice President and upon the death of Judge Westover he became President of the Richmondville Bank, a position he honorably held to the time of his death. He not only managed his own business successfully, but assumed the financial burdens and perplexing business problems of others. In religious sentiments he was a Methodist, and to that organization he was a consistent and helpful member. He was a member of the Masonic Fraternity, we think, and certainly belong to the order of Odd Fellows. He was familiar with the ways of the world, and had studied not only our own people and our own government, but had visited Europe for both pleasure and profit. He was a persistent and thoughtful reader. Politically, he was a Democrat, and while never seeking office for himself, he was always read to help political friends. He had social good qualities, and in all the various phases of life, in which he played an active and an influential part, he at times and under all circumstance was the courteous, well bred gentleman.

Related marker. Click here for another marker that is related to this marker. A Marker for the "Old Residence" of the Hon. John Westover