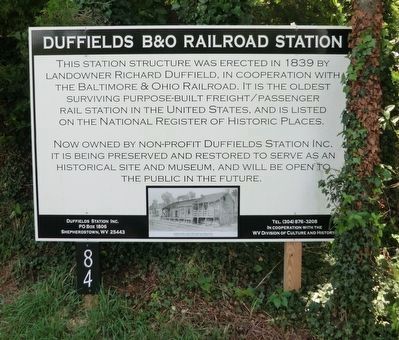 Photographed By Don Morfe, July 29, 2012
1. Duffields Depot Raid Marker
Inscription.
Duffields B&O Railroad Station. . , This station structure was erected in 1839 by landowner Richard Duffield, in cooperation with the Baltimore and Ohio Railroad. It is the oldest surviving purpose-built freight/passenger rail station in the United States, and is listed on the National Register of Historic Places., Now owned by non-profit Duffields Station Inc. it is being preserved and restored to serve as an historical site and museum, and will be open to the public in the future. . This historical marker was erected by Jefferson County Historic Landmarks Commission in cooperation with the WV Division of Arts, Culture and History. It is Near Shenandoah Junction in Jefferson County West Virginia

This station structure was erected in 1839 by landowner Richard Duffield, in cooperation with the Baltimore & Ohio Railroad. It is the oldest surviving purpose-built freight/passenger rail station in the United States, and is listed on the National Register of Historic Places.

Now owned by non-profit Duffields Station Inc. it is being preserved and restored to serve as an historical site and museum, and will be open to the public in the future.

Erected by Jefferson County Historic Landmarks Commission in cooperation with the WV Division of Arts, Culture and History.

Topics and series. This historical marker is listed in this topic list: Railroads & Streetcars. In addition, it is included in the Baltimore and Ohio Railroad (B&O) series list. A significant historical year for this entry is 1839. 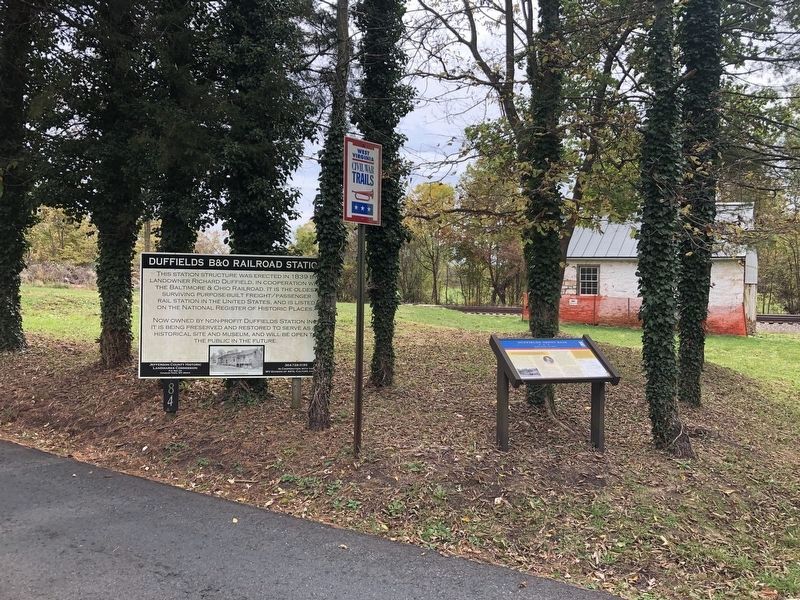 Click or scan to see
this page online
Marker is at or near this postal address: 14 Melvin Rd, Shenandoah Junction WV 25442, United States of America. Touch for directions.

Statement of Significance. Duffields Baltimore and Ohio (B&O) Railroad Depot is eligible under Criterion A:Transportation. For nearly half a century the depot was centrally involved in local transportation developments. The depot is also eligible under Criterion A: Military as a key supply depot for Union forces along the section of track between Harpers Ferry and Martinsburg during the Civil War. The period of significance begins in 1839, the year of construction, and ends in 1884 when the B&O constructed a nearby depot and no longer used the Duffields Depot. 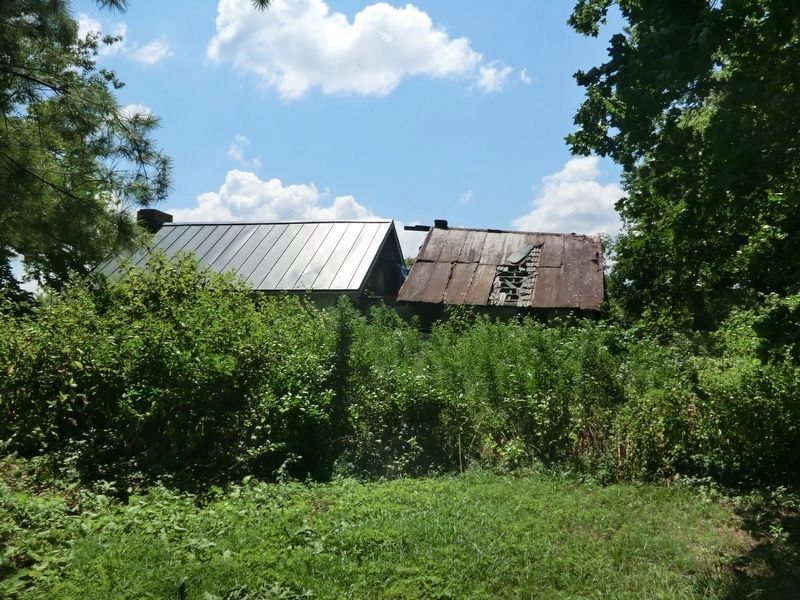 Photographed By Don Morfe, July 29, 2012
3. Duffields B&O Station in 2012
This period encompasses the years the building obtained its military significance, 1861-1865.

History. The B&O Railroad, the first class one, common-carrier railroad in the then-young United States, was incorporated under Maryland State charter in 1827, and began construction westward from Baltimore, Maryland in 1828, when the first stone was laid on July 4. The goal of the company was to reach the Ohio River, to bring the commerce of that region to Baltimore City and its port, and to carry goods and commodities as well as passengers inland to the Ohio River region, and beyond (the B&O reached Pittsburg—as it was then spelled—Pennsylvania in 1871, Chicago in 1875).

By 1836 the B&O had reached Harpers Ferry, Virginia. Between 1836 and 1842, the portion of the railroad between that location and Cumberland, Maryland on the upper Potomac River was under construction. During this early period, the B&O found it financially expedient, whenever and wherever possible, to use existing structures like inns and hotels as station-stops by mutual agreement with the owners, or to make contractual arrangements with adjacent landowners like Richard Duffield, for provision of suitable depot facilities for freight and passengers. 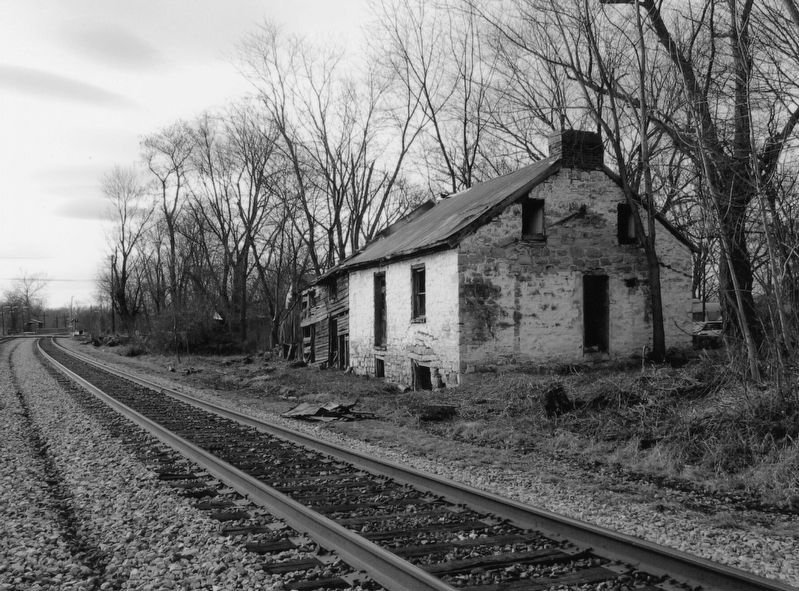 John Restaino, via NRHP nomination form 07000780, February 2007
4. Trackside View of Duffields Depot in 2007
right-of-way. With the money, Duffield constructed the extant stone-and-wood structure, which served as both a house for the B&O station master (the stone portion), and as a storage depot for incoming and outgoing goods and commodities (the wooden portion, on the western end of the structure).

In addition to the depot, a rectangular water tank was also located on the property close to the tracks to provide water for the steam locomotives, and there was also an ‘elevator building’ adjacent, where grain was stored for shipment (both of these structures are long gone, only foundation stones remain). A small stream nearby along the B&O right-of-way. Elk Run, a tributary of the Potomac River, supplied water.

When completed in 1839 Duffields Depot was one of five station-stops located between Harpers Ferry and Martinsburg, Virginia (as it then was). Baltimore to Martinsburg was the first Division of the B&O, a hundred miles of travel on the line, which was then considered a day’s work for a typical railroad operating crew of conductor, baggage porter, engineer and brakeman.

The B&O reached its original goal, the Ohio River, at Wheeling, Virginia on Christmas Eve, 1852 (the formal opening of the line to Wheeling occurred on January 1, 1853, with a special train and ceremonies in Wheeling). Later, after the Civil War, the B&O was able to afford to build and man its own company-owned facilities, and thus the privately-owned Duffields Depot, and similar depots, were replaced with newer stations, designed mostly by the B&O house architect, E. Francis Baldwin of Baltimore.

Duffields, West Virginia received such a structure, a small Victorian station located to the West of the 1839 station, and on the other side of the tracks (about where the MCI compound is located today, within the present bounds of the MARC commuter station facility opened for commuters in 1986); that 1883-1884 vintage station was apparently razed in 1942 when Duffields disappears from the B&O schedules as a regular station stop, reverting to flag-stop status.

Duffields Depot is purported to be the second oldest extant B&O Railroad Depot, after the B&O Depot in Ellicott City, Maryland, built in 1829-30.

Criterion A: Transportation. From 1839 to 1883 Duffields Depot served local farmers and railroad passengers on a daily basis. Grain and other agricultural produce was shipped from Duffields, and goods and commodities were received and shipped at the station, along with passengers arriving and departing on the regularly-scheduled B&O trains along the B&O mainline. In addition, the B&O carried coal, iron ore and other commodities. Trains became larger, longer, and heavier and locomotives steadily more powerful as improvements in technology were made throughout the nineteenth century.

It will give some sense of the enormous importance of the B&O railroad and the Duffields Depot to local commerce and travel in the entire region to note that when the B&O reached Wheeling, shippers were able to obtain a freight rate of $ 5/ton for a shipment to or from Baltimore, a vast improvement over the $ 100/ton rate prevailing on the competing National Road, where both goods and passengers traveled more slowly by horse-drawn conveyances at an average speed of about 5 to 10 miles per hour, versus an average speed of 25 to 30 miles per hour on the railroad. Traveling west from Baltimore, Wheeling was an overnight train ride for passengers from 1853 onward. As the railroad advanced, stage-coach lines terminated their services at the newest railroad junction, as most passengers wanted to ride the faster, larger, more comfortable train cars, the latest technology.

Criterion A: Military. During the Civil War, the B&O was an essential lifeline of communication and shipment for the Union Army, for Washington, DC, and for the northern states in general. Other railroads like the Pennsylvania and New York Central to the north competed with the B&O for commerce and passengers to and from the Midwest. The B&O rail line was very heavily damaged during the war years by frequent and often devastating Confederate raids all along the line (damage was quickly repaired in almost all cases).

One such raid was the infamous “Greenback Raid” on October 14, 1864 when Colonel John Singleton Mosby and his rangers cut the B&O tracks just west of the Duffields Depot. When the train derailed they took 20 prisoners and 15 horses. Among the prisoners were two paymasters with over $150,000 in Government funds. Four months earlier, on June 29, he attacked the actual depot and took fifty prisoners, including two lieutenants, before being forced to retreat by federal troops.

Union Army forces guarded the B&O line all during the war, and Duffields Depot was a key point of provisioning and resupply for the Union forces in the area of what became the eastern panhandle of the new state of West Virginia (whose establishment-and removal from the State of Virginia—was engineered by John Work Garrett, the B&O Railroad’s President from 1858 to his death on 1884).

Many Union regiments and detachments were stationed at and around Duffields Depot during the Civil War, among them the 10“’ Maine regiment; the Sixth Virginia Cavalry (100 men); two companies of the First Potomac Home Brigade, Maryland Volunteers; the 14*'’ Pennsylvania Cavalry, and other units.

Summary. Since its construction in 1839 the depot passed through the hands of a succession of private owners; at no time was the depot or the land it is built on owned either by the B&O Railroad Company, or by its successor, CSX Corporation.

Duffields Baltimore and Ohio (B&O) Railroad Depot is a significant part of Jefferson County’s transportation and military history. It existed as an important railroad depot from 1839 until the B&O constructed a new depot building in 1883 and was significant in Civil War history as a key supply depot for Union Forces. It retains excellent historic architectural integrity for a building constructed in the early 19th century. The addition does not detract from its significance as it was constructed in the historic period.

As the depot nears its terquasquicentennial, plans for preservation are moving forward. The resource was recently purchased by Duffields Station, Inc., a West Virginia non-profit organization, incorporated in 2003, planning the restoration and preservation of the building. Long-term goals include archaeological investigations and a museum.