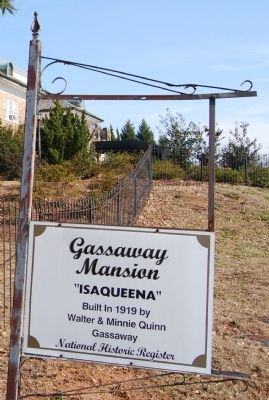 Topics. This historical marker is listed in these topic lists: Churches & Religion • Education • Industry & Commerce. A significant historical year for this entry is 1919. 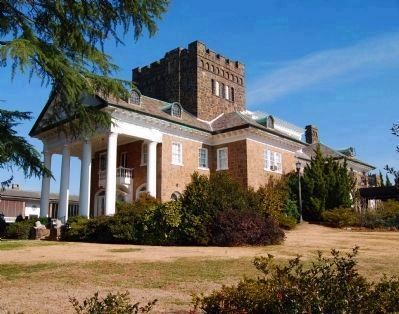 Photographed By Brian Scott, February 2, 2009
2. Gassaway Mansion (Isaqueena) -
Front (West) Side
From the National Register nomination form: "Built as a residence between 1919 and 1924 by Walter and Minnie Quinn Gassaway, the mansion is said to have been designed by Minnie Gassaway after she took a correspondence course in architecture. It is a three-story building with a full basement and is constructed of random bond stone masonry."

Also see . . .
1. Isaqueena. One of Greenville’s most unusual buildings, the Gassaway Mansion is representative of the exuberance and prosperity of the 1920s and derives significance from its eclectic architecture. (Submitted on February 3, 2009, by Brian Scott of Anderson, South Carolina.) 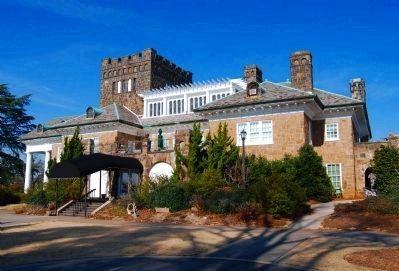 Photographed By Brian Scott, February 2, 2009
3. Gassaway Mansion (Isaqueena) -
South Side
From the National Register nomination form: "A truly unigue building, the mansion is an eclectic combination of architectural styles which represents the wealth of Greenville in the 1920s."
for Walter Gassaway, which is where the Hyatt stands now in Greenville.

Walter and Minnie lived in the Ottaray hotel for several years, and eventually had a baby girl. At this point, they decided to build a 22,000 square foot mansion on land one mile from Main Street in Greenville. Through a unique use of a combination of materials and architectural designs, the Gassaway family created a one-of-a-kind mansion, which they named “Isaqueena”. (Source: upstatebrides.com: Spotlight on The Gassaway Mansion http://www.upstatebrides.com/index.php?option=com_content&view=category&layout=blog&id=42&Itemid=148.)
— Submitted February 3, 2009, by Brian Scott of Anderson, South Carolina.
2. About the Gassaway Mansion
The Gassaway Mansion, built between 1920 and 1924 by Walter and Minnie Quinn Gassaway and costing $790,000, is one of Greenville's most astonishing structures. In 1919, the stones for the exterior of the house were gathered from a mill which had once belonged to Vardry McBee and had been constructed in downtown Greenville along the Reedy River. The interior of the house contains wood paneling and flooring from New York, tiles from Italy, and stained glass windows from Tiffany's. In 1959, the Greenville Art Association purchased the house and property, 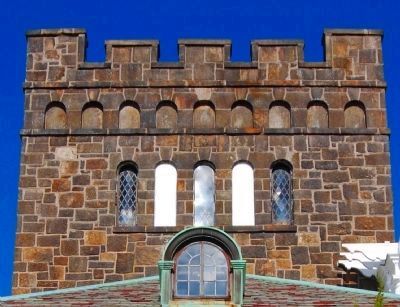 Photographed By Brian Scott, February 2, 2009
4. Gassaway Mansion -
Tower Detail South Side
From the National Register nomination form: "Asymmetrical, the house features a Neo-Gothic castellated tower, two rooftop patios, an enclosed arcade with leaded glass, and a massive porte-cochere on its rear elevation. Contemporary buildings on the property include a stone carriage house with a slate roof and round-arched dormers."
and in 1977, the Emmanuel Temple used the house as a church school. Today, William and Janette Thompson and daughter and son-in-law, Colleen and Marc Wheeler, own the house and its 22,000 square feet, 5 floors, and 40 rooms. (Source: Greenville County Historic Sites: Driving Tour by the Greenville County Library System, page 15.)
— Submitted February 3, 2009, by Brian Scott of Anderson, South Carolina.
3. More About the Gassaway Mansion
Walter and Minnie Quinn Gassaway Mansion which is located just off East North Street. Walter was Greenville's most successful stock broker and speculator in the 1920s. Mr. Gassaway had transformed from a very poor country boy to a billionaire. The mansion was completed just before the 1929 stock market crash. Walter Gassaway lost everything and shot himself on the front lawn of his mansion. It is said that his ghost haunts the mansion as well as the front lawn. The mansion was divided up into apartments during the Great Depression and then came into county hands for delinquent taxes. Greenville County held on to it for some time and made it the first home of the Greenville County Art Museum in the 1950's. After the museum moved to College Street it was rented out to private citizens. In the late 1990, it was again on the market and the 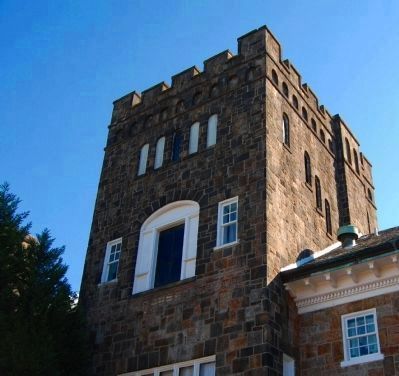 Photographed By Brian Scott, February 6, 2009
5. Gassaway Mansion -
Tower Detail North Side
From the National Register nomination form: "Involved in several textile operations, Gassaway was president and treasurer of the Isaqueena Mills, located in Central, South Carolina. He served as president of the Farmer's Bank at Central and was the organizer and longtime cashier for the American Bank of Greenville, an institution which served a large portion of the railroad and textile industry in the area."
County sold it for $1,000,000 to a Jewish group who used it as a temple. The group sold it after a few years and it returned to private ownership. Visitors may see the outside of the home and contact the owners for a private tour. (Source: Greenville, South Carolina http://india.smashits.com/wikipedia/Greenville-Spartanburg-Anderson_Combined_Statistical_Area.)
— Submitted February 3, 2009, by Brian Scott of Anderson, South Carolina.
4. About the Ottaray Hotel
The Ottaray Hotel opened in June of 1909 in downtown Greenville. The five-story, red brick building faced the corner of Main and Oak Street and was erected on the highest point in the city. Along with the Poinsett Hotel on South Main, the Ottaray had become a leading hotel for the social elite, but by 1960, it was out of date. The building was demolished to make way for a modern motel, the Downtowner. (Source: ?http://www.wyff4.com/download/2005/0630/4670636.pdf.)

A series of tragedies struck the Ottaray Hotel in the mid-1920s. On December 14, 1924, fire destroyed the roof and portions of the fourth and fifth floor. The eighty-five guests escaped without injury, but the entire building was damaged by water and had to be closed. It reopened on May 1, 1925, and did a flourishing business. A year later 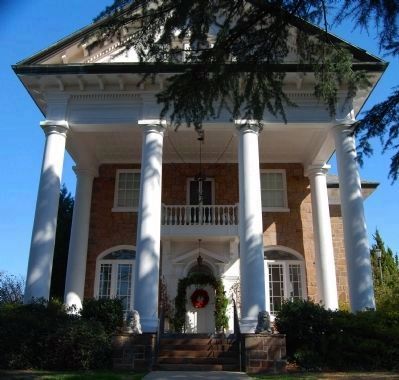 Photographed By Brian Scott, February 6, 2009
6. Gassaway Mansion -
Front (West) Side
From the National Register nomination form: "The façade is characterized by a massive Neo-Classical portico featuring a decorative frieze supported by six Doric columns. A bracketed cornice with dentil molding highlights the pediment which features a Palladian window. The remainder of the building is a blend of Neo-Gothic and Neo-Classical styles."
the hotel company announced plans to add twenty rooms, but on July 9 the Ottaray operator, J.L. Alexander, a native of Walhalla, was burned to death in an automobile accident near Columbia. Months later Bobby Goodyear was killed when he lost his footing and was crushed by the hotel elevator. The symbol of the Ottaray Hotel remained, however. Jack, a sixty-five pound bulldog owned by the hotel bookkeeper P.M. Hilly, was known as the official mascot of the building and stayed at his post until his death in 1931. (Source: Greenville by Archie Vernon Huff and Archie V. Huff, Jr., page 309.)
— Submitted February 7, 2009, by Brian Scott of Anderson, South Carolina. 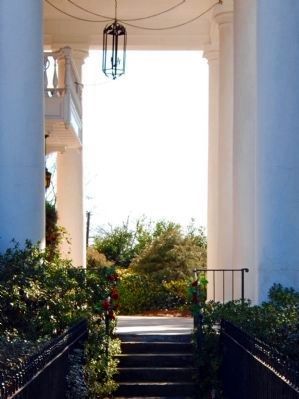 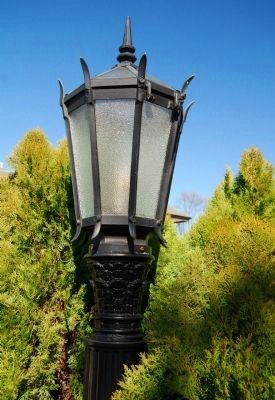 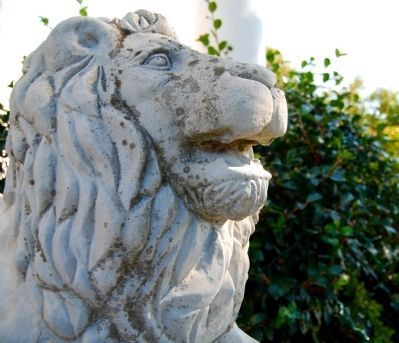 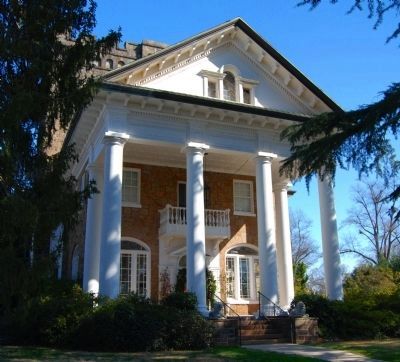 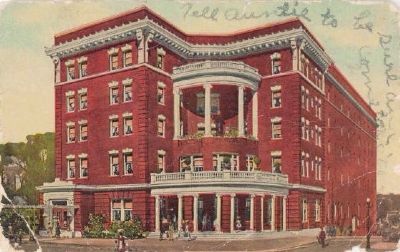