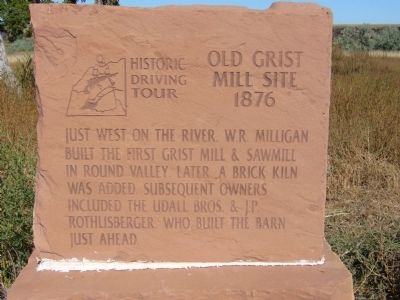 Photographed By Bill Kirchner, September 24, 2010
1. Old Grist Mill Site Marker
Inscription.
Old Grist Mill Site. , Just west on the river, W.R Milligan built the first grist mill and sawmill in Round Valley, later a brick kiln was added. Subsequent owners included the Udall Bros. and J.P. Rothlisberger who built the barn just ahead. . This historical marker was erected in 2002 by Round Valley Positive Action Tourism Committee and Springerville-Eagar Chamber of Commerce.. It is in Springerville in Apache County Arizona

Just west on the river, W.R Milligan built the first grist mill & sawmill in Round Valley, later a brick kiln was added. Subsequent owners included the Udall Bros. & J.P. Rothlisberger who built the barn just ahead.

Other nearby markers. At least 8 other markers are within 2 miles of this marker, measured as the crow flies. Snyder-Cavanaugh Shoot Out (approx. half a mile 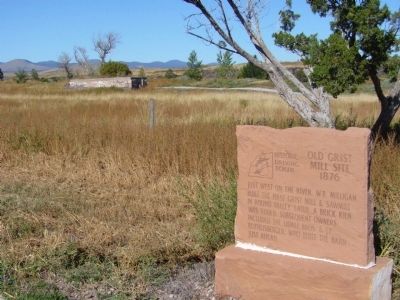 More about this marker. This is Marker Site #5 on the Pistols, Plows and Petticoats Historic Driving Tour.

Regarding Old Grist Mill Site. William R. Milligan was the first farmer and water user on record on the Little Colorado. He established a small fort here in 1871. The houses were adobe with flat, leaky roofs. He constructed the unlined Milligan Ditch with headgates on the river one half mile east of which later became the Colter Ranch. After one year he had over 1,000 acres cultivated. Near here he began construction of a small grist mill or burr mill and sawmill. Power for them was furnished by an overshot wheel erected at the point where his irrigation ditch emptied back into the river. It is known that Milligan farmed until 1883. From then his activities are unclear.

Around 1888, David K. Udall wrote of applying sheep to the purchase of the Milligan farm from Henry Huning of Show Low. David and his younger brother enlarged the 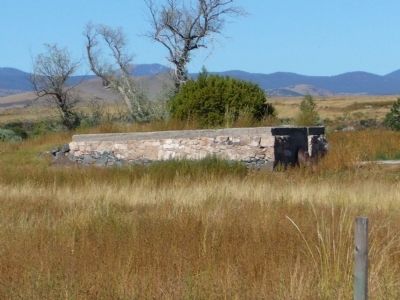 Photographed By Bill Kirchner, September 24, 2010
3. Old Grist Mill Site
This nearby structure may be the foundation of the barn mentioned in the marker text. A recent contributor has noted that as of October 2020 there is no barn nearby.
ditches and improved efficiency. The brothers ran the farm until 1898 when Joseph left for a two year Mormon mission and David moved back to St. Johns.

The next year the farm was sold to J.P. Rothlisberger, John LeSueur and other partners. Later J.P. bought out the partners and continued to run the grist mill and sawmill for several years.

All that remains are parts of the foundation and some ditches. The old mill pond is still here in the midst of the golf course. Only a broken malpais (basalt) grinding stone, a few old brick boards, and an old ledger book J.P. had at the sawmill survive today.
Source: Pistols, Plows and Petticoats Historic Driving Tour Brochure.