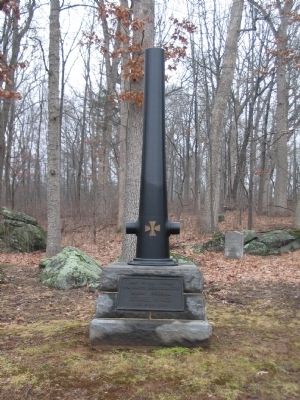 Topics. This memorial is listed in this topic list: War, US Civil. A significant historical date for this entry is July 2, 1849.

Location. 39° 47.835′ N, 77° 14.068′ W. Marker is in Cumberland Township, Pennsylvania, in Adams County. Memorial is on Sedgwick Avenue, on the right when traveling north. Located on the south part of Cemetery Ridge in Gettysburg National Military Park. Touch for map. Marker is in this post office area: Gettysburg PA 17325, United States of America. Touch for directions. 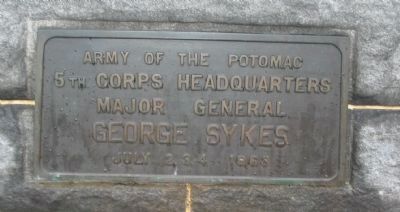 Photographed By Craig Swain, December 27, 2008
2. Close Up of Front Plaque

Also see . . .  Reports of Maj. Gen. George Sykes. General Sykes sumarized the fighting of the third day in his official report:
On the 3d, Crawford held his ground in front, sustained by Bartlett's division, of Sedgwick's corps. The troops remained as the day before. Desultory firing from the pickets continued along our front. At 1 p.m. the enemy commenced a furious cannonade from more than one hundred guns, and occasionally a part of it was bestowed on the Fifth and Sixth Corps. It was the prelude to his attack, which soon followed and raged to our right; but, beaten, baffled, and discomfited, he returned to the shelter of the forests west of the Emmitsburg and Gettysburg pike. My artillery on the rocky ridge helped to shatter and disorganize his troops. (Submitted on February 7, 2009, by Craig Swain of Leesburg, Virginia.) 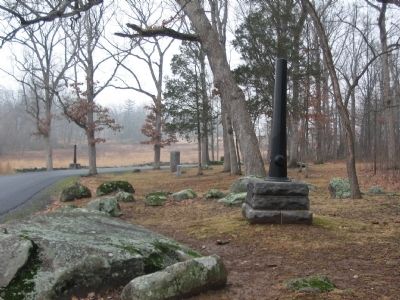 Photographed By Craig Swain, December 27, 2008
3. 5th Corps Headquarters
The Fifth and Sixth Corps headquarters were practically co-located on July 3rd. The cannon indicating the headquarters of Sixth Corps is just north along the road. 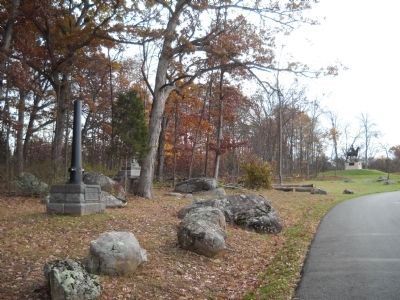