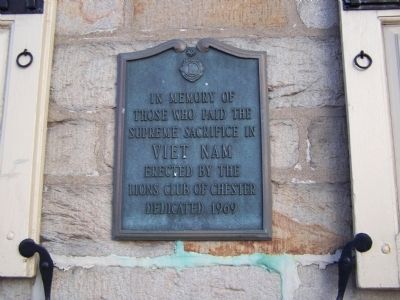 Photographed By Bill Pfingsten, January 1, 2009
1. Viet Nam Plaque
Inscription.
Viet Nam. .
In memory of those who paid the supreme sacrifice in Viet Nam . . This memorial was erected in 1969 by Lions Club of Chester. It is in Chester in Delaware County Pennsylvania

Erected 1969 by Lions Club of Chester.

Location. 39° 50.874′ N, 75° 21.595′ W. Marker is in Chester, Pennsylvania, in Delaware County. Memorial is on Ave. of the States, on the right when traveling south. Plaque is on the wall of the Colonial Courthouse. Touch for map. Marker is in this post office area: Chester PA 19013, United States of America. Touch for directions.

Editor’s want-list for this marker. A wide shot of the plaque and its surroundings. • Can you help?
Share this page.