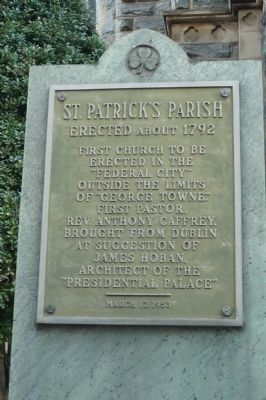 By Richard E. Miller, February 7, 2009
1. St. Patrick's Parish Marker
Inscription.
St. Patrick's Parish. Erected about 1792. , First church to be erected in the "Federal City" outside the limits of "George Towne." First pastor, Rev. Anthony Caffrey, brought from Dublin at suggestion of James Hoban, architect of the "Presidential Palace." , March 17, 1953. . This historical marker was erected in 1953. It is in Penn Quarter in Washington District of Columbia

First church to be erected in the "Federal City" outside the limits of "George Towne." First pastor, Rev. Anthony Caffrey, brought from Dublin at suggestion of James Hoban, architect of the "Presidential Palace."
March 17, 1953.

Topics. This historical marker is listed in this topic list: Churches & Religion. A significant historical date for this entry is March 17, 1953. 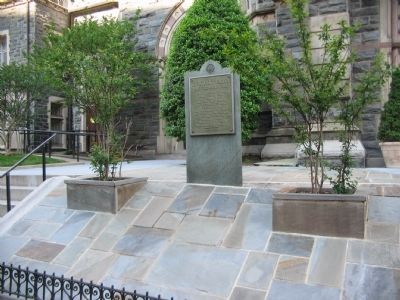 Also see . . .
1. Saint Patrick Catholic Church. ... The first American to be ordained a priest in the United States, Fr. William Matthews, was named pastor in 1804. This multi-talented clergyman occupied the post for fifty years, during which time he was also President of Georgetown University, Administrator of the Philadelphia Diocese, co-founder of the D.C. Public Library, long-time member of the D.C. Public School Board, as well as founder or promoter of innumerable institutions (e.g. Gonzaga College, Visitation Convent, and St. Vincent's Orphan Asylum). As the "Catholic Patriarch of Washington," Father Matthews was on close terms with Washington notables such as Henry Clay and Chief Justice Roger Brooke Taney; Presidents Zachery Taylor and John Quincy Adams attended parish events. ... (Submitted on February 7, 2009, by Richard E. Miller of Oxon Hill, Maryland.) 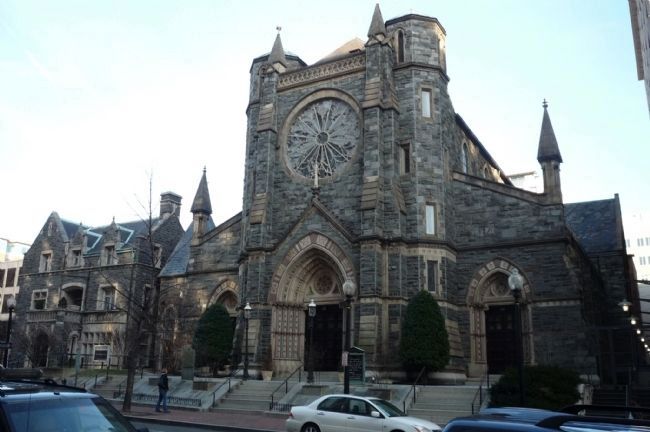 By Richard E. Miller, February 7, 2009
3. St. Patrick's R.C. Church
present edifice constructed 1872-1884. The marker is visible above sidewalk, center-left.
. The 1850's brought waves of new Catholic immigrants; the Civil War ... burgeoning numbers of troops, some 50,000 wounded soldiers and new government employees. The parish under Father Jacob Walter, its fourth pastor, undertook its new challenges with vigor ... [E]specially outspoken in the defense of Mary Surratt, a parish member who was convicted of complicity in Lincoln's assassination, ... the pastor stood beside her on the gallows at her execution. It was under Father Walter's direction that the present gothic church was begun in 1872 and finally dedicated in 1884. The grand church quickly became the venue for national and international events, most notably the First National Eucharistic Congress in 1895. At the same time the parish was fast becoming the "downtown" church of a thriving commercial area. (Submitted on February 7, 2009, by Richard E. Miller of Oxon Hill, Maryland.)