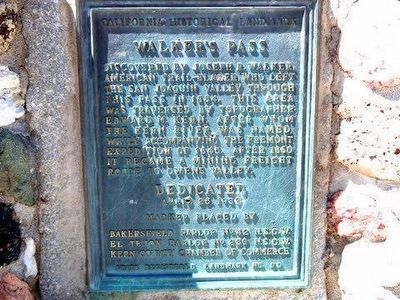 Photographed By Alan Price
1. Walker's Pass Marker
Inscription.
Walker's Pass. . Discovered by Joseph R. Walker, American trail-blazer who left the San Joaquin Valley through this pass in 1834. This area was traversed by topographer Edward M. Kern, after whom the Kern River was named, while accompanying the Fremont expedition of 1845. After 1860 it became a mining freight route to Owens Valley. . This historical marker was erected in 1937 by Bakersfield Parlor No. 42 N.S.G.W., El Tejon Parlor No. 239 N.S.G.W., and Kern County Chamber of Commerce. It is in Onyx in Kern County California

Discovered by Joseph R. Walker, American trail-blazer who left the San Joaquin Valley through this pass in 1834. This area was traversed by topographer Edward M. Kern, after whom the Kern River was named, while accompanying the Fremont expedition of 1845. After 1860 it became a mining freight route to Owens Valley.

Topics and series. This historical marker is listed in this topic list: Roads & Vehicles. In addition, it is included in the California Historical Landmarks, the E Clampus Vitus, the National Historic Landmarks, and the Native Sons/Daughters of the Golden West series lists. A significant historical year for this entry is 1834.

Other nearby markers. At least 1 other marker 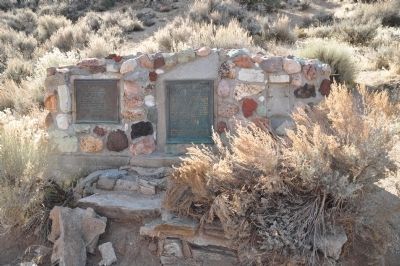 Click or scan to see
this page online
is within 9 miles of this marker, measured as the crow flies. Indian Wells (approx. 8.7 miles away).

More about this marker. This site has been designated California Registered Historical Landmark No. 99.
This site was also designated a National Historic Landmark on July 4, 1961.
Statement of Significance:
Named for Joseph R. Walker, a fur trapper and guide. Native Americans showed the still remote pass to Walker in 1834, and he led the first immigrant wagon train into California through this pass in 1843.

Although the marker references El Tejon Parlor No. 239 NSGW, El Tejon 239 is a parlor of the Native Daughters of the Golden West (NDGW). How the ones who placed the plaque allowed this to stand is anyone's guess.

Regarding Walker's Pass. This location was plaqued as an E Clampus Vitus historical marker in October of 1963, but that specific marker is no longer there. The location of the 1963 marker can be seen in the 2011 photo, the white concrete spot on the right.

In 2012 E Clampus Vitus completely rebuilt and reset the base of the markers which had eroded away as can be seen in the 2011 and 2013 photos. They dedicated the latest granite and ceramic plaque, thus replacing the 1963 plaque at that time. 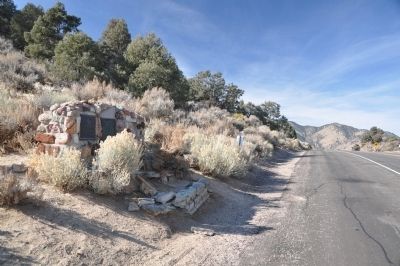 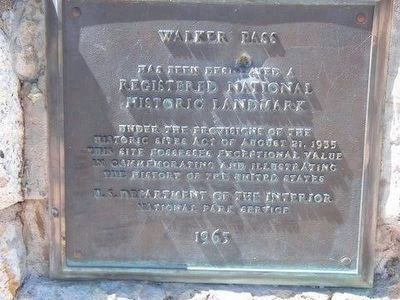 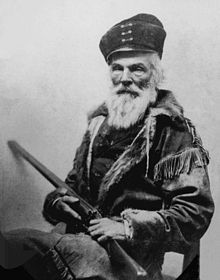 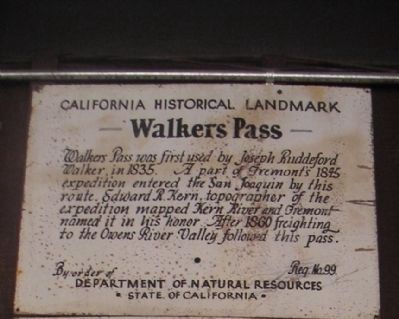 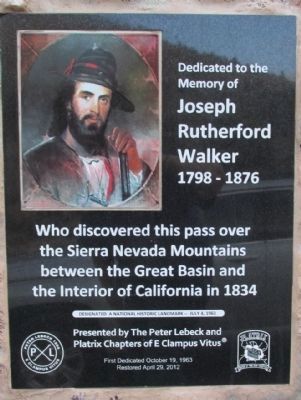 Photographed By Denise Boose, December 31, 2013
7. Joseph Rutherford Walker Marker
Dedicated to the Memory of Joseph Rutherford Walker 1798-1876 Who discovered this pass over the Sierra Nevada Mountains between the Great Basin and the Interior of California in 1834. Disignated a National Historic Landmark --July 4, 1961 Presented by The Peter Lebeck and Platrix Chapters of E Clampus Vitus First Dedicated October 19, 1963 Restored April 29. 2012 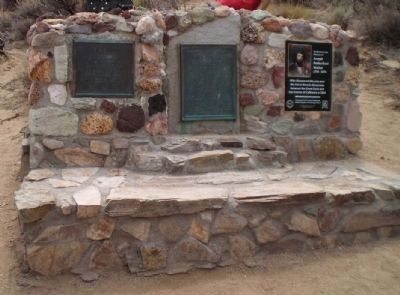 Photographed By Lester J Letson, July 18, 2013
8. Repaired Walker's Pass Base and Marker
Members of E Clampus Vitus came together in 2012 to completely rebuild the base for the marker prior to installing the ceramic granite marker seen on the right. 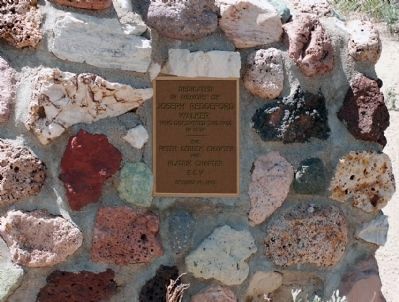 Photographed By Unknown, circa 1963
9. 3rd Walker's Pass Marker, Since Replaced
This brass marker was dedicated in 1963, but was vandalized and destroyed around 40 years later. A new granite and ceramic marker with John Walker's picture on it now takes its place 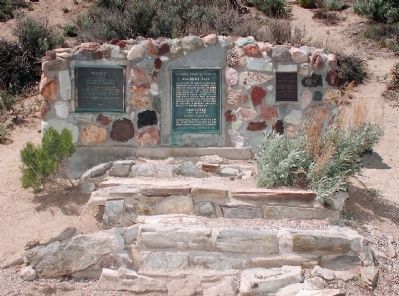