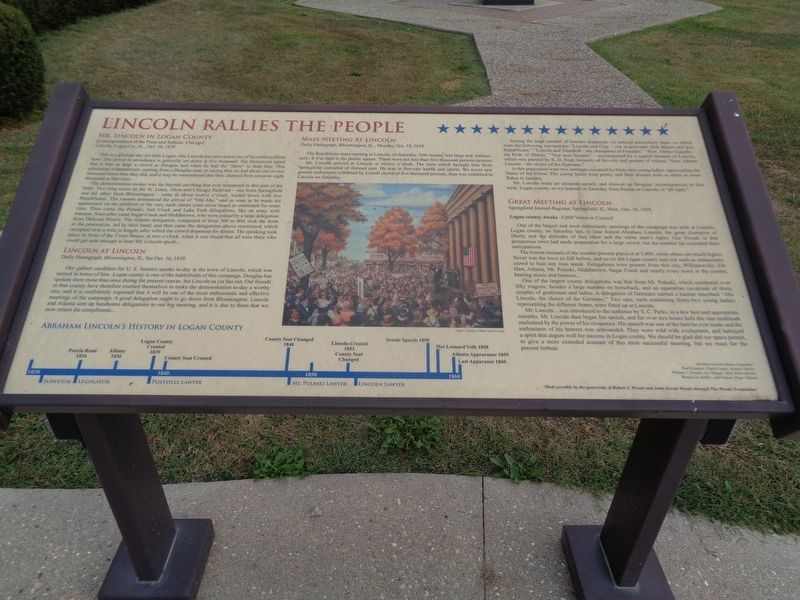 This is a glorious day for little Logan. Abe Lincoln has just closed one of his noblest efforts here. The crowd in attendance is generally set down at five thousand. The Democrats admit that it was as large a crowd as Douglas had when he had the "show" to help him. This admission is tantamount, coming from a Douglas man, to saying that we had about one or two thousand more than they did, and it may be remembered that they claimed from seven to eight thousand at that time.

The demonstration to-day was far beyond anything that ever transpired in this part of the State. Two long trains on the St. Louis, Alton and Chicago Railroad - one from Springfield and the other from Bloomington - came in about twelve o'clock, loaded down with live Republicans. The cannon announced the arrival of "Old Abe," and as soon as he made his appearance on the platform of the cars, such cheers were never heard as continued for some time. Then came the Pulaski, Salt Creek and Lake Fork delegations, like an 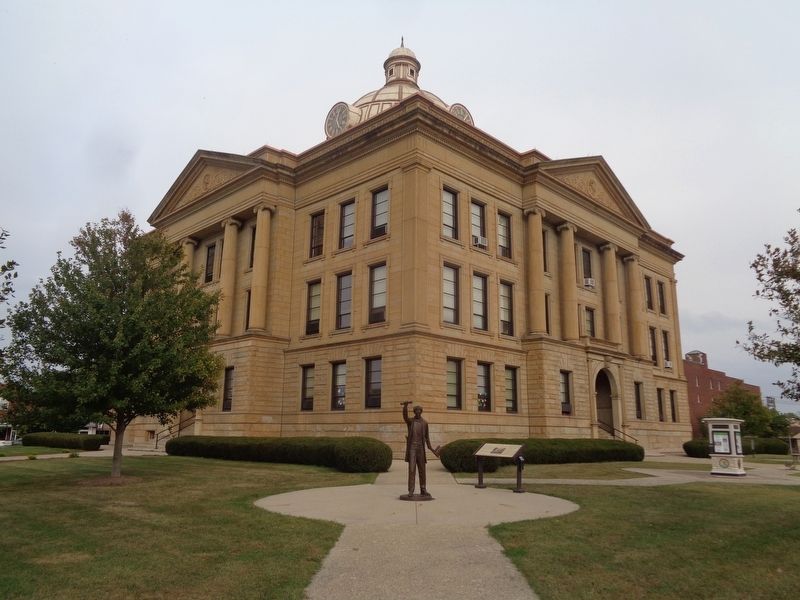 Photographed By Jason Voigt, September 27, 2020
2. Lincoln Rallies the People Marker
Marker is outside the Logan County Courthouse and next to a statue of Abraham Lincoln

Click or scan to see
this page online
army with banners. Soon after came Sugar Creek and Middletown, who were joined by a large delegation from Delavan Prairie. The Atlanta delegation, composed of from 300 to 400, took the front in the procession, led by their band, and then came the delegations above mentioned; which occupied over a mile in length; after which the crowd dispersed for dinner. The speaking took place in front of the Court House, at two o'clock, when it was found that all were there who could get near enough to hear Mr. Lincoln speak…

Our gallant candidate for U.S. Senator speaks to-day at the town of Lincoln, which was named in honor of him. Logan county is one of the battlefields of this campaign. Douglas has spoken there more than once during the present canvas, but Lincoln as yet has not. Our friends in that county have therefore exerted themselves to make the demonstration to-day a worthy one, and it is confidently expected that it will be one of the most enthusiastic and effective meetings of the campaign. A good delegation ought to go down from Bloomington. Lincoln and Atlanta sent up handsome delegations to our big meeting, and it is due to them that we now return the compliment…

The Republican mass meeting at Lincoln, on Saturday, 16th instant, was large and enthusiastic. It was held in the public square. There were not less than five thousand persons present.

Mr. Lincoln arrived at Lincoln at twelve o'clock. The train which brought him from Springfield consisted of thirteen cars. He was in first-rate health and spirits. We never saw greater enthusiasm exhibited by a small crowd of five thousand persons, than was exhibited in Lincoln on Saturday.

Among the large number of banners displayed, we noticed particularly those on which were the following inscriptions: "Lincoln and Clay - one in principle; firm friends and true Republicans." "Lincoln and Trumbull - the champions of Freedom." "Hon. Abram Lincoln - the Pride of Illinois." "Our next Senator." - accompanied by a capital likeness of Lincoln, which was painted by R.D. Neal, formerly of this city and present of Atlanta. "Hon. Abram Lincoln - the choice of the Germans."

In this procession were two carriages occupied by thirty-two young ladies, representing the States of the Union. The young ladies were pretty, and their dresses were as white as snow flakes in January.

Mr. Lincoln made an eloquent speech, and showed p Douglas' inconsistencies in fine style. Logan county, so we learned on Saturday from friends in Lincoln, is "all right."

One of the largest and most enthusiastic meetings of the campaign was held at Lincoln, Logan county, on Saturday last, to hear honest Abraham Lincoln, the great champion of liberty and the defender of free labor and the white man's rights. Our friends in that prosperous town had made preparation for a large crowd, but the number far exceeded their anticipations.

The lowest estimate of the number present places it at 5,000, while others are much higher. Never was the town so full before, and never did Logan county turn out such as enthusiastic crowd to hear any man speak. Delegations were present from this city, Williamsville, Elk Hart, Atlanta, Mt. Pulaski, Middletown, Sugar Creek and nearby every town in the county, bearing music and banners…

One of the largest county delegations was that from Mt. Pulaski, which numbered over fifty wagons, besides a large number on horseback, and an equestrian cavalcade of thirty couples of gentlemen and ladies. A delegation of Germans carried a banner inscribed "Abe Lincoln, the choice of the Germans." Two cars, each containing thirty-two young ladies, representing the different States, were fitted up at Lincoln.

Mr. Lincoln…was introduced to the audience by S.C. Parks, in a few best and appropriate remarks. Mr. Lincoln then began his speech, and for over two hours held the vast multitude enchained by the power of his eloquence. His speech was one of the best he ever made and the enthusiasm of his bearers was unbounded. They were wild with excitement, and betrayed a spirit that augurs well for success in Logan county. We should be glad did our space permit, to give a more extended account of this most successful meeting, but we must for the present forbear.

Topics and series. This historical marker is listed in this topic list: Government & Politics. In addition, it is included in the Former U.S. Presidents: #16 Abraham Lincoln series list. A significant historical year for this entry is 1858.

Location. 40° 8.758′ N, 89° 21.774′ W. Marker is in Lincoln, Illinois, in Logan County. Marker is at the intersection of Pulaski Street and South Kickapoo Street, on the right when traveling west on Pulaski Street. Touch for map. Marker is at or near this postal address: 601 Broadway St, Lincoln IL 62656, United States of America. Touch for directions.