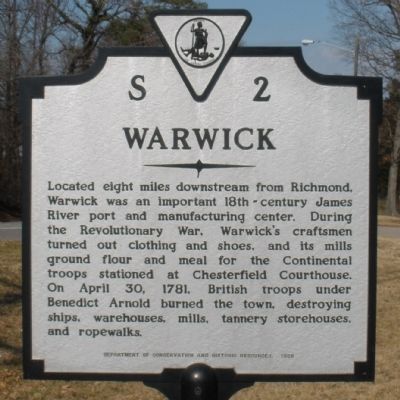 By Bernard Fisher, February 9, 2009
1. Warwick Marker
Inscription.
Warwick. . Located eight miles downstream from Richmond, Warwick was an important 18th-century James River port and manufacturing center. During the Revolutionary War, Warwick's craftsmen turned out clothing and shoes, and its mills ground flour and meal for the Continental troops stationed at Chesterfield Courthouse. On April 30, 1781, British troops under Benedict Arnold burned the town, destroying ships, warehouses, mills, tannery storehouses, and ropewalks. . This historical marker was erected in 1988 by Department of Conservation and Historic Resources. It is Near Richmond in Chesterfield County Virginia

Topics. This historical marker is listed in these topic lists: Settlements & Settlers • War, US Revolutionary. A significant historical month for this entry is April 1864.

Location. 37° 26.289′ N, 77° 26.326′ W. Marker is near Richmond, Virginia, in Chesterfield County. Marker is on Jefferson Davis Highway (U.S. 1) 0.4 miles south of Chippenham Parkway (Virginia Route 150), in the median. The marker is located at the Falling Creek Wayside. Touch for map. Marker is in this post office area: Richmond VA 23234, United States of America. Touch for directions.

Other nearby markers. At least 8 other markers are within walking distance of this marker. Falling Creek Ironworks (here, next to this marker); 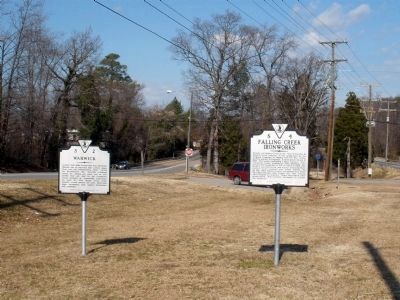