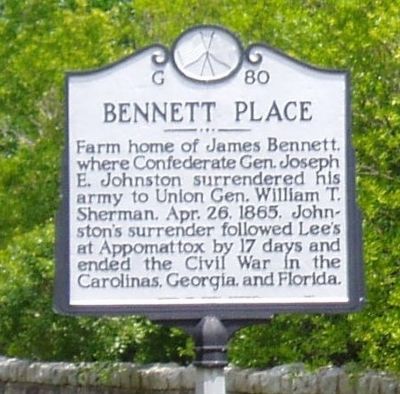 By John Walker Guss, July 25, 2007
1. Bennett Place Marker
Inscription.
Bennett Place. . Farm home of James Bennett, where Confederate Gen. Joseph E. Johnston surrendered his army to Gen. William T. Sherman, April 26, 1865. Johnston’s surrender followed Lee’s at Appomattox by 17 days and ended the Civil War in the Carolinas, Georgia, and Florida. . This historical marker was erected in 1962 by Department of Archives and History. It is in Durham in Durham County North Carolina

Erected 1962 by Department of Archives and History. (Marker Number G-80.)

Topics. This historical marker is listed in these topic lists: Military • War, US Civil. 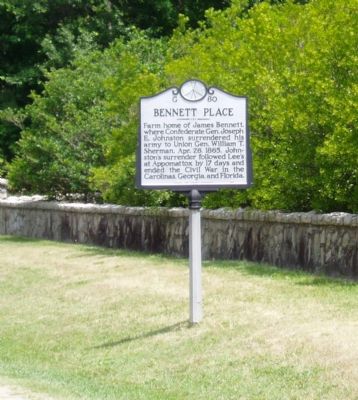 More about this marker. Bennett Place was one of the surrender sites of the American Civil War.

Regarding Bennett Place. Bennett Place is a designated state historic site. The main house, kitchen house, and smokehouse have been reconstructed. A visitor center provides a museum gallery, reference library, and interpretive movie of the events around the surrender. Living history events occur throughout the year. 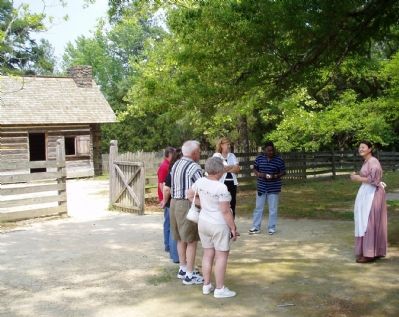 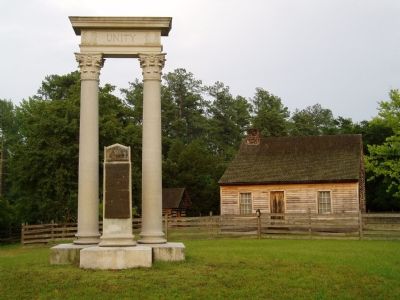 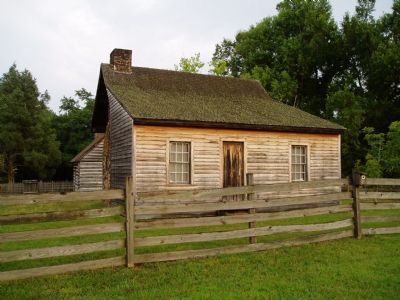 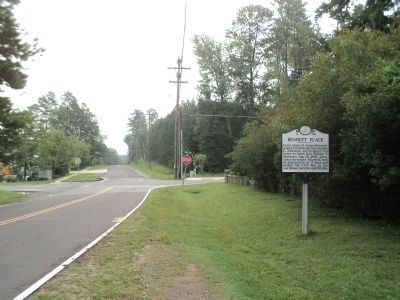 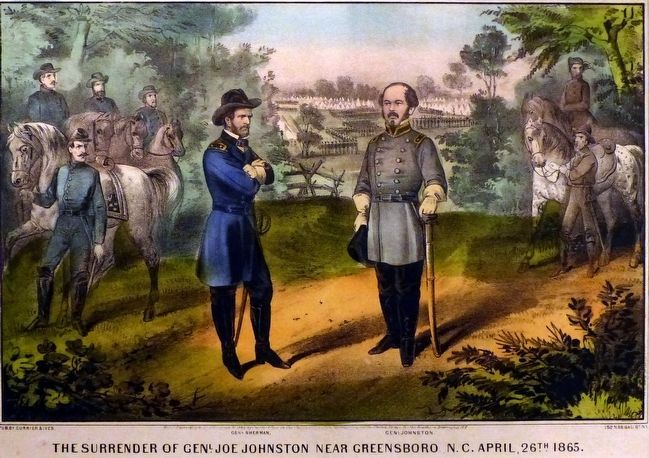 “After Lee surrendered at Appomattox, Confederate General Joseph E. Johnston considered the war to be a lost cause and sought terms of peace with his nemesis-in-blue, General William T. Sherman. This print celebrates the formal surrender of Johnston's army on April 26, 1865, near Greensboro, North Carolina.

After the war, Johnston and Sherman, both West Pointers, became friends. In February 1891, Johnston served as a pallbearer at Sherman's funeral in New York City, where he caught a cold and died of complications from pneumonia the next month.” — National Portrait Gallery 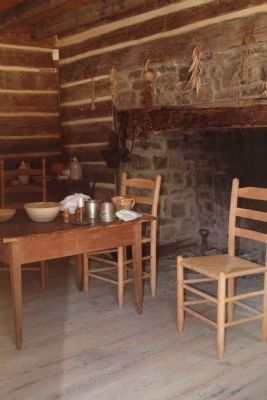 By Paul Jordan, July 2, 2010
9. Bennett Place Marker
One hundred feet east of this spot in the Bennett house General Joseph E. Johnston and Major General William T. Sherman met at noon April 17, 1865 to discuss terms of a proposed surrender. They met in this house again on April 18 and wrote and signed a "basis of agreement" under the terms of which General Johnston agreed to surrender all the Confederate armies then in the field. President Andrew Johnson rejected the terms agreed upon, sent orders to General Sherman on April 24 to give forty-eight hours notice and resume hostilities at the end of that time and ordered General Grant to go to Raleigh to "direct military movements." General Grant arrived in Raleigh on April 24, but out of consideration for General Sherman he did not assume command. On the evening of April 25, General Johnston "asked another interview" with General Sherman "to renew negotiations," and on the twenty-sixth at 2 p.m. the generals met a third time in the Bennett house and signed the terms of a military convention, "under which 36,817 Confederate soldiers in North Carolina and 52,453 in Georgia and Florida laid down their arms. This monument thus marks the spot where the military force of the United States of America finally triumphed and established as inviolate the principle of an indissoluble union. It marks also the spot of the last stand of the Confederacy in maintaining its ideal of indestructible states - an ideal which preserved to the American Union by virtue of the heroic fight grows in strength from year to year. 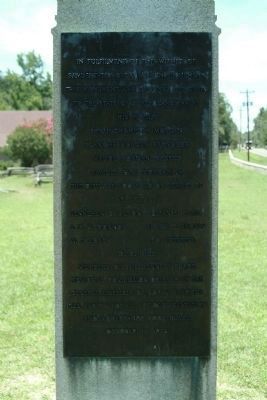 By Paul Jordan, July 2, 2010
10. The Back Side of the Bennett Place Marker
In fulfilment of the wishes of Samuel Tate Morgan and in his memory this monument and grounds are given to the State of North Carolina by his family. Sarah Thompson Morgan Blanche Morgan Reynolds Maude Morgan Cabell Samuel Tate Morgan, Jr. The gift was accepted on behalf of the state by Bennehan Cameron, Julian S. Carr, R.D.W. Connor, Frank C. Brown W.T. Bost, R.O. Everett, D.H. Hill Members of the Bennett Place Memorial Commission created by the General Assembly of North Carolina 1923, and the formal act of presentation and acceptance took place October 12, 1923 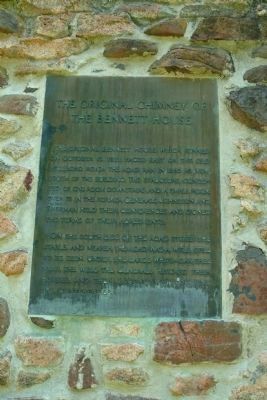 By Paul Jordan, July 2, 2010
11. The Original Chimney of the Bennett House Marker
The orginal Bennett House, which burned on October 12, 1921, faced east on the old Hillsboro Road: the road ran in 1865 as now south of the building. The structure consisted of one room downstairs and a small room over it: in the former General Johnston and Sherman held their conferences and signed the terms of their agreements. On the south side of the road stood the stable, and nearer the road was a well, still to be seen. Under the large white-oak tree near the well the Generals hitched their horses, and their escorts waited during the conferences. 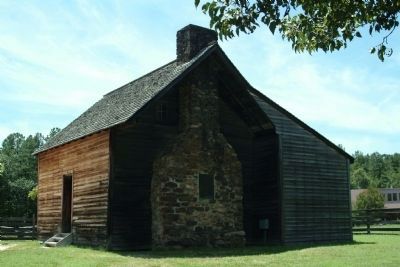