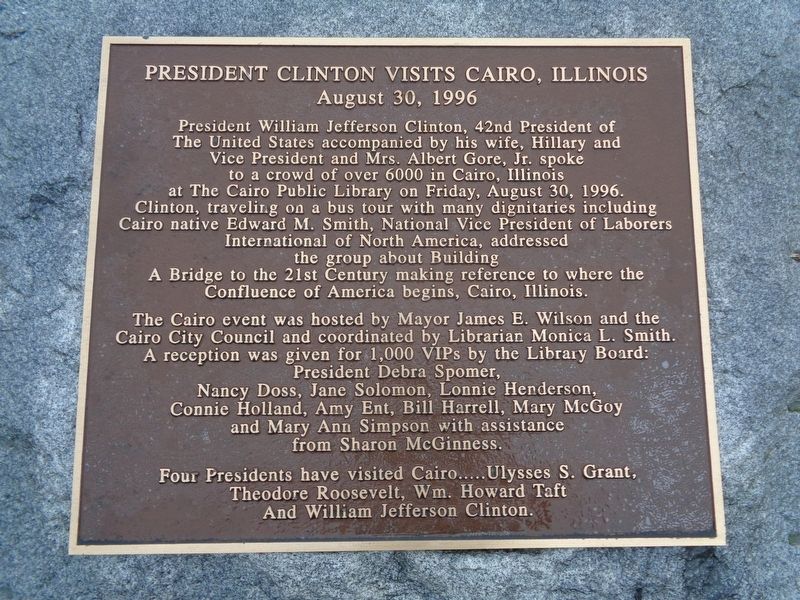 President William Jefferson Clinton, 42nd President of The United States accompanied by his wife, Hillary and Vice President and Mrs. Albert Gore, Jr. spoke to a crowd of over 6000 in Cairo, Illinois at The Cairo Public Library on Friday, August 30, 1996. Clinton, traveling on a bus tour with many dignitaries including Cairo native Edward M. Smith, National Vice President of Laborers International of North America, addressed the group about Building a Bridge to the 21st Century making reference to where Confluence of America begins, Cairo, Illinois. 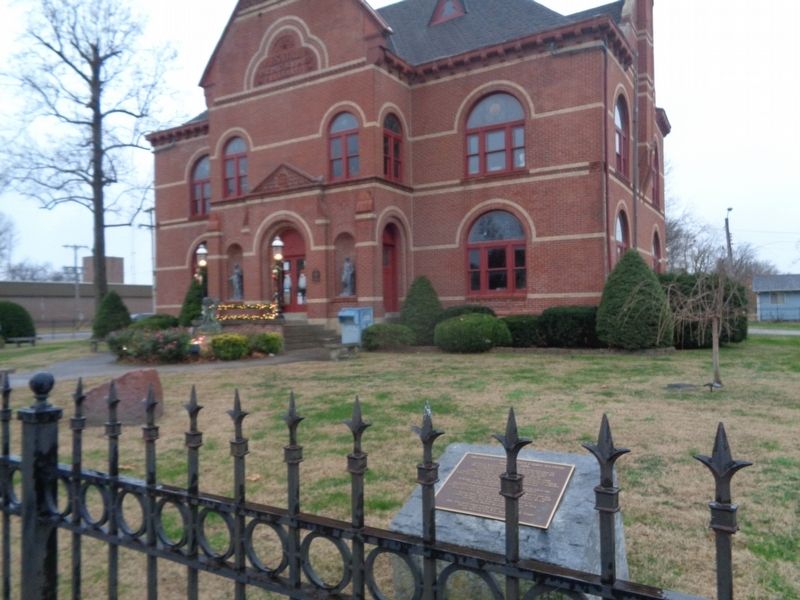 By Jason Voigt, November 29, 2020
2. President Clinton Visits Cairo, Illinois Marker
Marker is in front of Cairo Public Library (behind a fence, which was locked when I took this photo)
• Labor Unions. In addition, it is included in the Former U.S. Presidents: #42 William Jefferson "Bill" Clinton series list.

Other nearby markers. At least 8 other markers are within 2 miles of this marker, measured as the crow flies. Mary J. Safford (here, next to this marker); York the Slave (about 500 feet away, measured in a direct line); Seaman (about 500 feet away); Duncan Cannon (about 600 feet away); The Beginning of the Third Principal Meridian (approx. 1.1 miles away); The Ohio River Bridge (approx. 1.6 miles away); Lewis and Clark in Illinois (approx. 1.7 miles away); Historical Survey Marker (approx. 1.7 miles away). Touch for a list and map of all markers in Cairo.
Credits. This page was last revised on November 29, 2020. It was originally submitted on November 29, 2020, by Jason Voigt of Glen Carbon, Illinois. This page has been viewed 45 times since then and 4 times this year. Photos:   1, 2. submitted on November 29, 2020, by Jason Voigt of Glen Carbon, Illinois.
Share This Page.