A Brief History of the Kentucky Guard 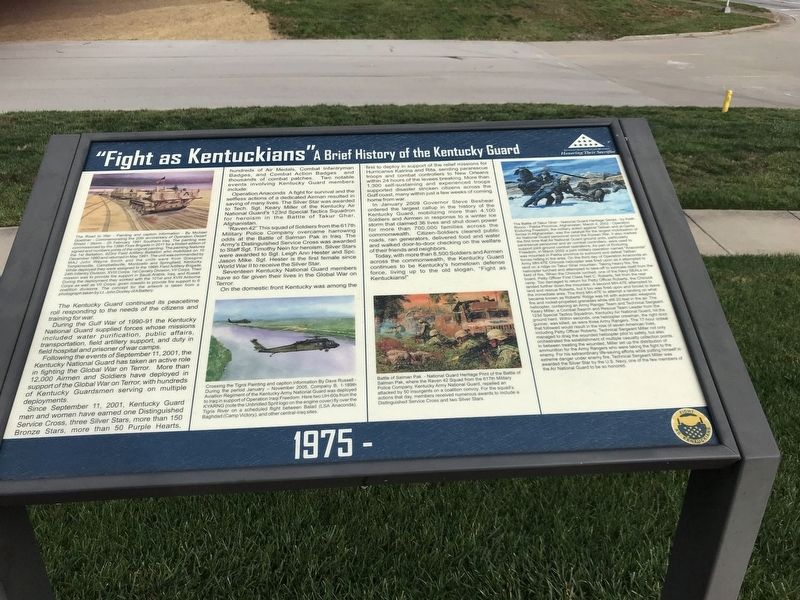 The Kentucky Guard continued its peacetime role responding to the needs of the citizens and training for war.

Operation Anaconda - A fight for survival and the selfless actions of a dedicated Airman resulted in saving of many lives. The Silver Star was 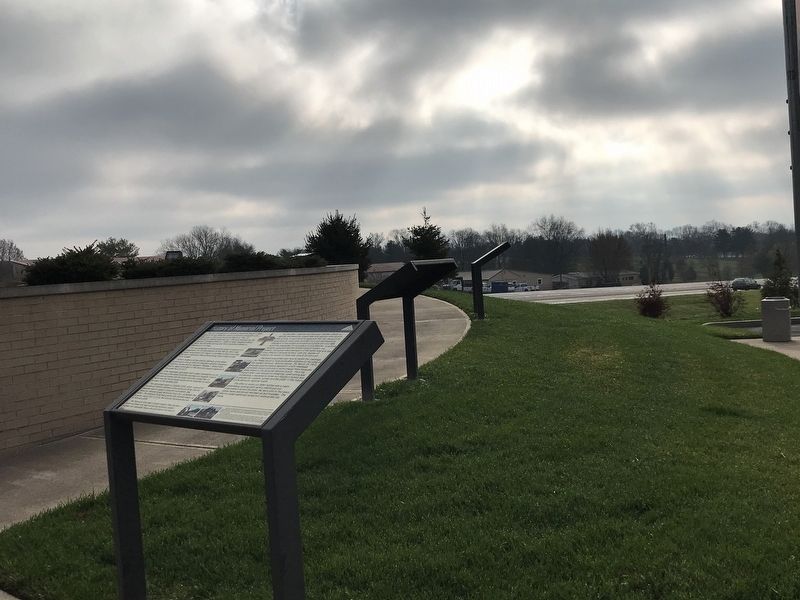 By Duane and Tracy Marsteller, November 28, 2020
2. "Fight as Kentuckians" Marker
Marker is to the rear.
awarded to Tech. Sgt. Keary Miller of the Kentucky Air National Guard's 123rd Special Tactics Squadron for heroism in the Battle of Takur Ghar, Afghanistan.

"Raven 42” - This squad of Soldiers from the 617th Military Police Company overcame harrowing odds at the Battle of Salman Pak in Iraq. The Army's Distinguished Service Cross was awarded to Staff Sgt. Timothy Nein for heroism. Silver Stars were awarded to Sgt. Leigh Ann Hester and Spc. Jason Mike. Sgt. Hester is the first female since World War II to receive the Silver Star.

Seventeen Kentucky National Guard members have so far given their lives in the Global War on Terror.

On the domestic front Kentucky was among the first to deploy in support of the relief missions for Hurricanes Katrina and Rita, sending pararescue troops and combat controllers to New Orleans within 24 hours of the levees breaking. More than 1,300 self-sustaining and experienced troops supported disaster stricken citizens across the Gulf coast, many within just a few weeks of coming home from war.

In January 2009 Governor Steve Beshear ordered the largest callup in the history of the Kentucky Guard, mobilizing more than 4,100 Soldiers and Airmen in response to a winter ice storm that claimed 36 lives and shut down power for more than 700,000 families across the commonwealth. Citizen-Soldiers cleared public roads, 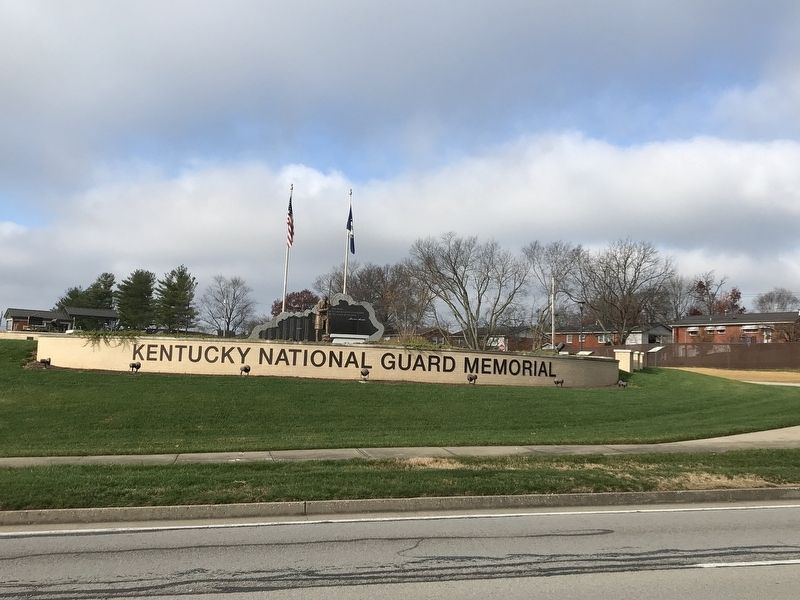 By Duane and Tracy Marsteller, November 28, 2020
3. Kentucky National Guard Memorial
As seen from West Frankfort Connector.
ran generators, delivered food and water and walked door-to-door checking on the welfare of their friends and neighbors.

Today, with more than 8,500 Soldiers and Airmen across the commonwealth, the Kentucky Guard continues to be Kentucky's hometown defense force, living up to the old slogan, "Fight as Kentuckians!"

Captions
Top left: The Road to War - Painting and caption information -By Michael Goettner - Commemorating the 20th anniversary of Operation Desert Shield / Storm - 25 February 1991 Southern Iraq. The painting was commissioned by the 138th Fires Brigade in 2011 for a limited edition of signed and numbered prints of the original painting. The painting features the 1st Battalion, 623rd Field Artillery Battalion who mobilized on 10 December 1990 and returned in May 1991. The unit was commanded by MAJ John Wayne Smith and the units were from Glasgow, Tompkinsville, Campbellsville, Monticello and Springfield, Kentucky. While deployed they were assigned to the 196th Field Artillery Brigade, 24th Infantry Division, XVIII Corps; 1st Cavalry Division, VII Corps. Their mission was to provide fire support in Saudi Arabia, Iraq, and Kuwait. During the deployment they worked with the 101st and XVIII Airborne Corps as well as VII Corps; given mission to provide fire support to 6 coalition divisions. The concept for the artwork is taken from a photograph taken by Lt. John Dooley of A Battery.

Bottom left: Crossing the Tigris Painting and caption information By Dave Russell - During the period January-November 2005, Company B, 1-189th Aviation Regiment of the Kentucky Army National Guard was deployed to Iraq in support of Operation Iraqi Freedom. Here two UH-60s from the KYARNG (note the Unbridled Sprit logo on the engine cover) fly over the Tigris River on a scheduled flight between Balad (LSA Anaconda), Baghdad (Camp Victory), and other central-Iraq sites.

Bottom right: Battle of Salman Pak - National Guard Heritage Print of the Battle of Salman Pak, where the Raven 42 Squad from the 617th Military Police Company, Kentucky Army National Guard, repelled an attack by 50 insurgents on a coalition convoy. For the squad's actions that day, members received numerous awards to include a Distinguished Service Cross and two Silver Stars.

Top right: The Battle of Takur Ghar - National Guard Heritage Series - by Keith Rocco - Paktia Province, Afghanistan, March 4, 2002- Operation Enduring Freedom, the military action against Taliban and al-Qaida forces in Afghanistan, was the catalyst for the largest mobilization of Air National Guard personnel since the Korean War. It also marked the first time that Air National Guard ground units, particularly pararescue personnel and air combat controllers, were used to support joint ground combat operations. As part of Enduring Freedom, in March 2002 a joint military operation named "Anaconda" was mounted in Paktia province to surround and defeat Taliban forces hiding in the area. On the third day of Operation Anaconda an Army MH-47E Chinook helicopter was fired upon as it attempted to land on a ridge on Takur Ghar mountain. Taking heavy fire, the helicopter lurched and attempted to take-off to extricate itself from the field of fire. When the Chinook lurched, one of the Navy SEALS on board, Petty Officer First Class Neil C. Roberts, fell from the rear ramp. Too damaged to return for Petty Officer Roberts, the Chinook landed further down the mountain. A second MH-47E attempted to land and rescue Roberts, but it too was fired upon and forced to leave the immediate area. The third MH-47E to attempt a landing on what became known as Roberts' Ridge was hit with automatic weapons fire and rocket-propelled grenades while still 20 feet in the air. The helicopter, containing an Army Ranger Team and Technical Sergeant Keary Miller, a Combat Search and Rescue Team Leader from the 123d Special Tactics Squadron, Kentucky Air National Guard, hit the ground hard. Within seconds, one helicopter crewman, the right door gunner, was killed, as were three Army Rangers. The 17-hour ordeal that followed would result in the loss of seven American lives, including Petty Officer Roberts. Technical Sergeant Miller not only managed to drag the wounded helicopter pilot to safety, but also orchestrated the establishment of multiple casualty collection points. In between treating the wounded, Miller set up the distribution of ammunition for the Army Rangers who were taking the fight to the enemy. For his extraordinary life-saving efforts while putting himself in extreme danger under enemy fire, Technical Sergeant Miller was awarded the Silver Star by the U.S. Navy, one of the few members of the Air National Guard to be so honored.