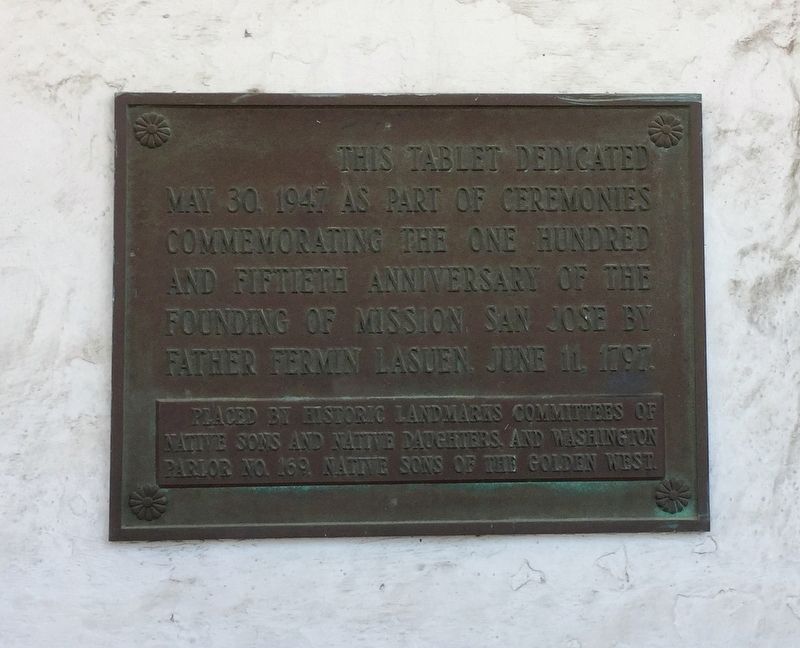 This tablet dedicated May 30, 1947 as part of ceremonies commemorating the one hundred and fiftieth anniversary of the founding of Mission San Jose by Father Fermin Lasuen, June 11, 1797.

Erected 1947 by Native Sons of the Golden West Washington Parlor No. 169.

Topics and series. This historical marker is listed in these topic lists: Churches & Religion • Settlements & Settlers. In addition, it is included in the Native Sons/Daughters of the Golden West series list. 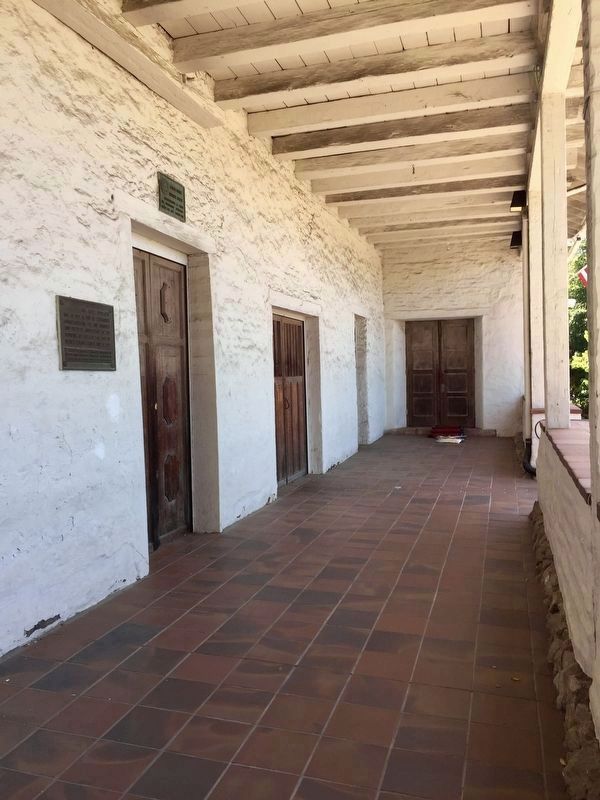 By Andrew Ruppenstein, June 4, 2020
2. Founding of Mission San Jose Marker - wide view
The marker is visible here to the left of the door of the mission's arcade fronting Mission Boulevard, with an Alameda County Historical Society plaque commemorating the founding of the Mission also visible above the door. (See next photo.)
distance of this marker); Mission San José (within shouting distance of this marker); Washington Hotel (within shouting distance of this marker); Ehrman General Store (about 400 feet away, measured in a direct line); Leland Stanford Winery (approx. 2.1 miles away); Mormon Pioneers / Mormon Pioneer Adobes (approx. 3.3 miles away). Touch for a list and map of all markers in Fremont.

Also see . . .  The Story of Mission San Jose (Mission San Jose). "Mission San Jose was founded on June 11, 1797 by Father Fermin Francisco de Lasuen on a site which was part of a natural highway by way of the Livermore Valley to the San Joaquin Valley. It is the fourteenth of the 21 Spanish Missions in Alta California. They were founded to secure Spain's claim to this land and to teach the native people Christianity and the Spanish way of life...." (Submitted on December 9, 2020.) 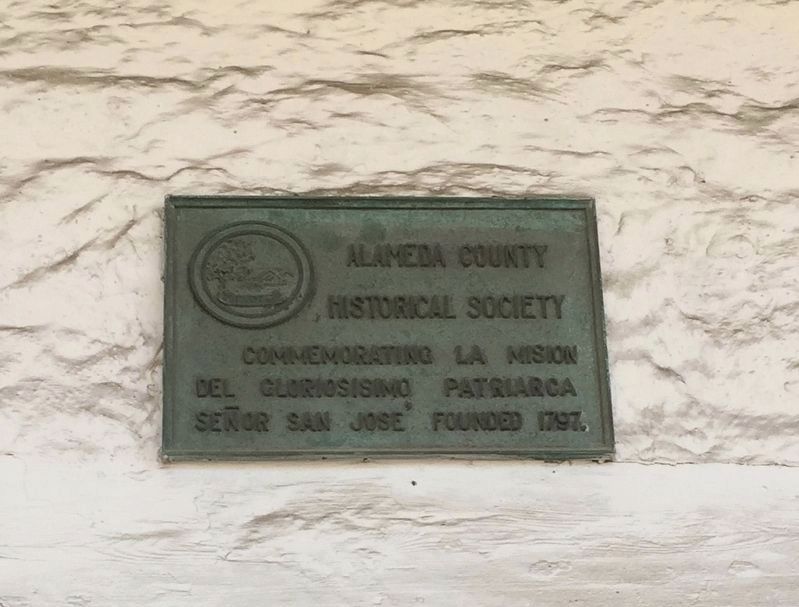 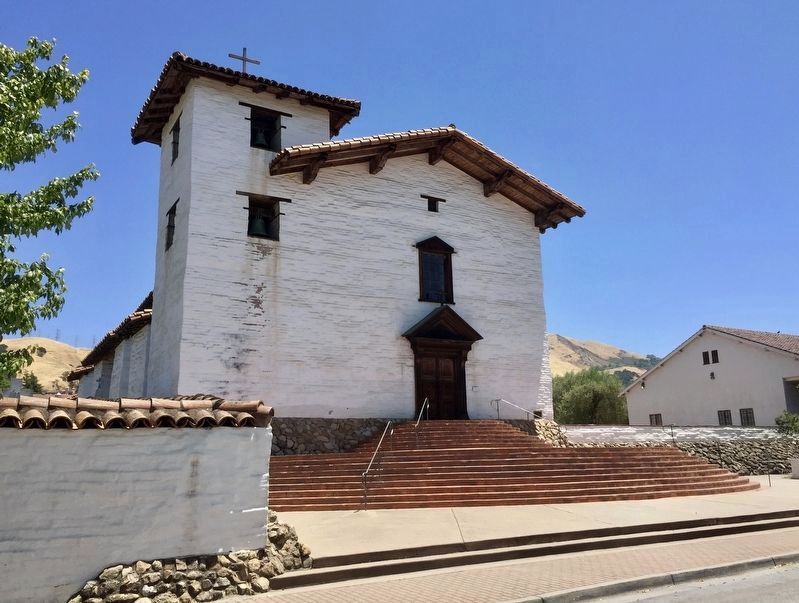 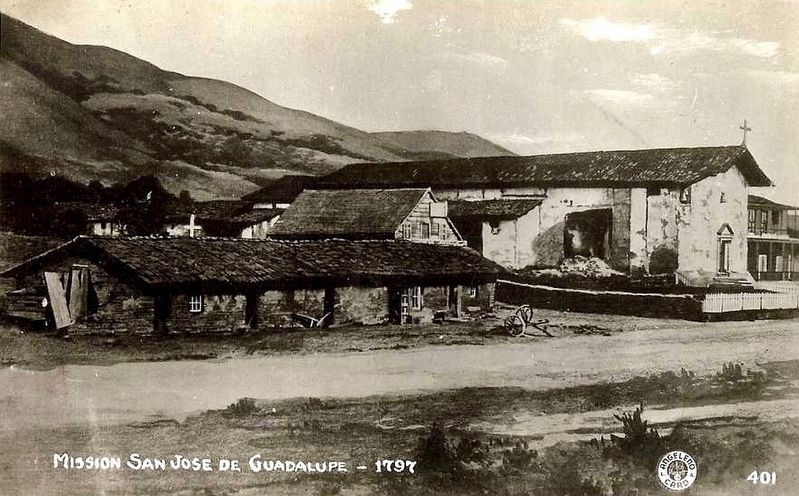 Postcard published by Angeleno Cards, circa 1910
5. "Mission San Jose de Guadalupe"
"Contrary to what you may have read in most books, we are not the Mission San Jose de Guadalupe. In the early part of the 1900's, a sign was erected on the roof of the Museum which said "Mission San Jose de Guadalupe." Many books have since been published and, unfortunately, the authors use this reference in their stories. When this Mission was founded it was named "La Mision del Gloriosisimo Patriarch San Jose" in honor of St. Joseph. All of our record books refer to the Mission as Mission San Jose. Though the pueblo (city) of San Jose was founded 13 miles south near the Guadalupe River, the only connection between the pueblo and the Old Mission is that both were named in honor of St. Joseph." - Mission San Jose website
Credits. This page was last revised on December 9, 2020. It was originally submitted on December 9, 2020, by Andrew Ruppenstein of Sacramento, California. This page has been viewed 50 times since then and 8 times this year. Photos:   1, 2, 3, 4, 5. submitted on December 9, 2020, by Andrew Ruppenstein of Sacramento, California.
Share This Page.