Odebolt • Popcorn Capital of the World 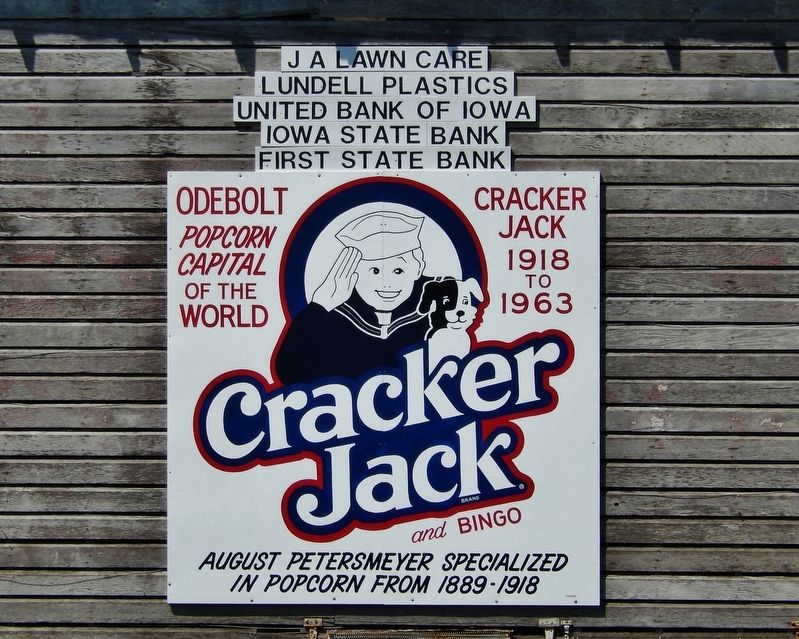 August Petersmeyer Specialized
in popcorn from 1889-1918

Topics and series. This historical marker is listed in these topic lists: Agriculture • Industry & Commerce. In addition, it is included in the Believe It or Not series list.

Also see . . .
1. Odebolt — The Popcorn Center of the World. As more and more farmers in this territory began to plant popcorn, buyers discovered

By Cosmos Mariner, August 10, 2017
2. Odebolt • Popcorn Capital of the World Marker
that the quality of the corn from Odebolt was better than any they were able to buy elsewhere. They encouraged its production, as a result, and at one time there was more of the corn raised within a 15-mile radius of Odebolt than in the rest of the world put together. Millions of pounds were shipped from Odebolt elevators each year, going to all parts of the world. In 1938, three nationally-known popcorn companies do a large business here: J. L. Bruce Popcorn Co., Albert Dickinson Popcorn Co., F. W. Rueckheim & Bro. (Cracker Jack) (Submitted on December 11, 2020, by Cosmos Mariner of Cape Canaveral, Florida.)