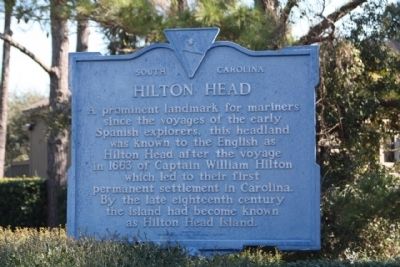 A prominent landmark for mariners since the voyages of the early Spanish explorers, this headland was known to the English as Hilton Head after the voyage in 1663 of Captain William Hilton which led to their first permanent settlement in Carolina. By the late 18th century the island had become known as Hilton Head Island.

Topics. This historical marker is listed in these topic lists: Colonial Era • Landmarks • Settlements & Settlers. A significant historical year for this entry is 1663. 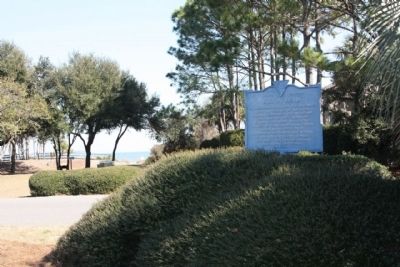 Regarding Hilton Head. Port Royal Plantation has long been a center of activity on Hilton Head Island, originally used by Native Americans for hunting and seafood gathering for hundreds of years. The bluffs of the plantation were first sighted in modern times by Spanish Captain Pedro de Quexos in 1521, and were subsequently claimed by English Captain William Hilton in 1663, from whom the Island takes its name. He was followed by a succession of Spanish, French and English explorers and traders.

Also see . . .  From Wikipedia, Hilton Head Island or Hilton Head. Since the beginning of recorded history in the New World, the 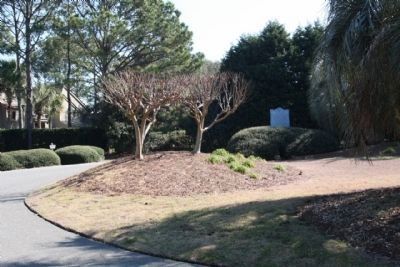 By Mike Stroud, February 2009
3. Hilton Head Marker
Circle at Catesby Lane and Fort Walker Dr.
waters around Hilton Head Island have been known, occupied and fought for in turn by the English, Spanish, French, and Scots (Submitted on February 18, 2009, by Mike Stroud of Bluffton, South Carolina.)

Additional commentary.
1. Captain William Hilton
... an exceptional seaman who was dubbed "William the Mariner" because of his ability. At the age of six, he became one of the first English settlers in North America when he settled with his mother at the Plymouth Colony.

By the 1660's, Hilton was in Barbados, a small British island colony involved in the growing of sugar cane. Growers in Barbados were in need of new land in which to grow sugar and other crops and, thus, Captain Hilton was sent by a group of planters to the Carolinas to find new land. On September 28, 1663, aboard his ship "The Adventure," Hilton sighted the "head" of the island which now bares his name. An account of his exploration, published in London in 1664, attracted the early settlers to Hilton Head Island. (The Captain William Hilton Chapter D.A.R.)
— Submitted February 23, 2013, by Mike Stroud of Bluffton, South Carolina. 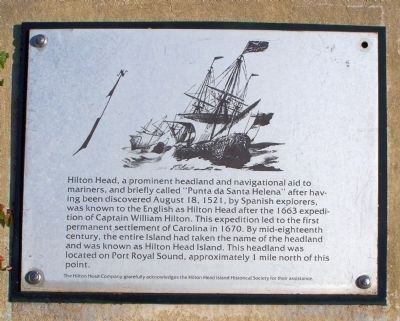 The Hilton Head Island Historical Society, August 29, 2009
4. Hilton Head from the Port Royal Interpretive Markers
Hilton Head, a prominent headland and navigational aid to mariners, and briefly called "Punta de Santa Helena" after having been discovered August 18, 1521, by Spanish explorers, was known to the English as Hilton Head after the 1663 expedition of Captain William Hilton. This expedition led to the first permanent settlement of Carolina in 1670. By mid-eighteenth century, the entire island had taken the name of the headland and was known as Hilton Head Island. The headland was located on Port Royal Sound, approximately 1 mile north of this point.
("This point" is at coordinates: 32.219908,-80.67118 ) 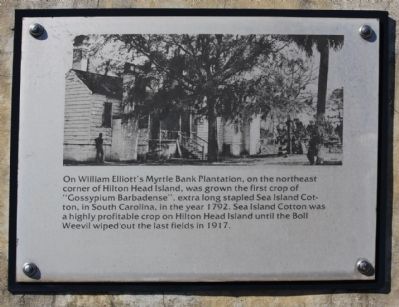