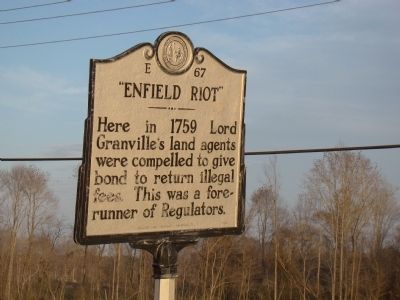 Photographed By J. J. Prats, February 14, 2009
1. “Enfield Riot” Marker
Inscription.
"Enfield Riot". . Here in 1759 Lord Granville’s land agents were compelled to give bond to return illegal fees. This was a forerunner of Regulators. . This historical marker was erected in 1960 by Archives and Highway Department. It is Near Enfield in Halifax County North Carolina

Here in 1759 Lord Granville’s land agents were compelled to give bond to return illegal fees. This was a forerunner of Regulators.

Topics and series. This historical marker is listed in this topic list: Colonial Era. In addition, it is included in the North Carolina Division of Archives and History series list. A significant historical year for this entry is 1759. 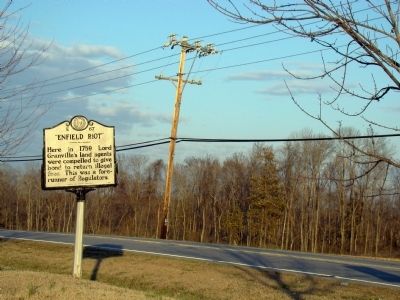 More about this marker. “Regulators” on the marker refers to fighters in the War of the Regulation, also known as the Regulator Movement, a North Carolina uprising against corrupt colonial officials between 1764 to 1771. While unsuccessful, it is considered by many a catalyst to the American Revolutionary War.

Also see . . .  Enfield History. “An event in Enfield’s history which probably helped to spark American independence was the ‘Enfield Riot,’ one of the earliest political actions against British tyranny. In January, 1759, a group of backwoodsmen seized Lord Granville’s land agent, Francis Corbin, in Edenton and brought him to Enfield. There they forced Corbin to give bond to return illegal fees which had been collected. On May 14, 1759, a group of citizens in Enfield expressed the same sentiments against British tyranny. Several of the ‘rioters’ were arrested and jailed. However, they were soon released when a irate group of citizens, broke into jail and freed them. It is thought that the actions of these men probably encouraged Willie Jones and the other radical leaders of North Carolina to push for independence from England through the Halifax Resolves of April 12, 1776.” (Submitted on February 18, 2009.)
Credits. This page was last revised on June 30, 2021. It was originally submitted on February 18, 2009, by J. J. Prats of Powell, Ohio. This page has been viewed 1,135 times since then and 42 times this year. Photos:   1, 2. submitted on February 18, 2009, by J. J. Prats of Powell, Ohio.
Share this page.