The Founders of the City of Los Angeles 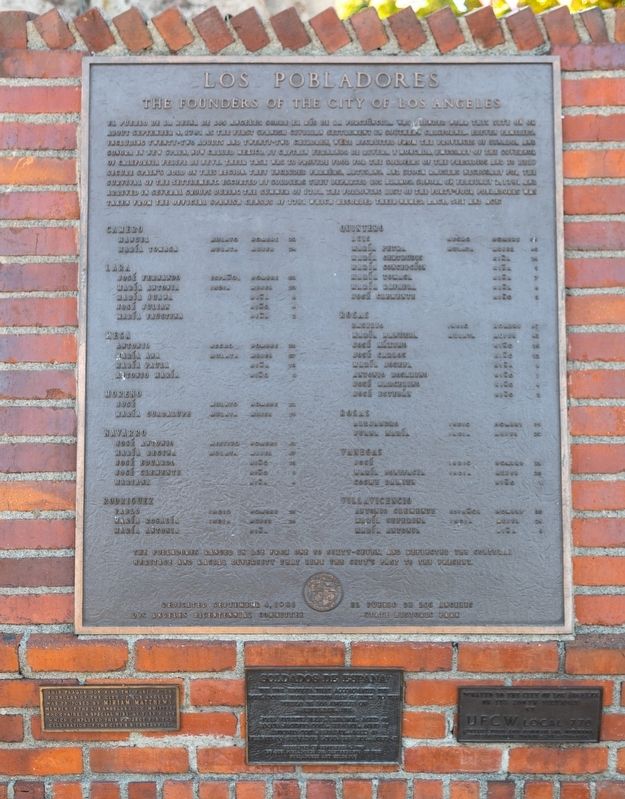 El Pueblo de la Reina de los Ángeles sobre el Río de la Porcíuncula was founded near this site on or about September 4, 1781, as the first Spanish civilian settlement in Southern California. Eleven families, including twenty-two adults and twenty-two children, were recruited from the Province of Sinaloa and Sonora in New Spain, now called Mexico, by Captain Fernando de Rivera y Moncada, emissary of the Governor of California Felipe de Neve. Their task was to provide food for the soldiers of the presidios and to help secure Spain’s hold on this region. They included farmers, artisans, and stock raisers necessary for the survival of the settlement. Escorted by soldiers they departed Los Alamos, Sonora, on February 2, 1781 and arrived in several groups during the summer of 1781. The following list of the forty-four pobladores was taken from the official Spanish census of 1781 which recorded their names, race, sex, and age. 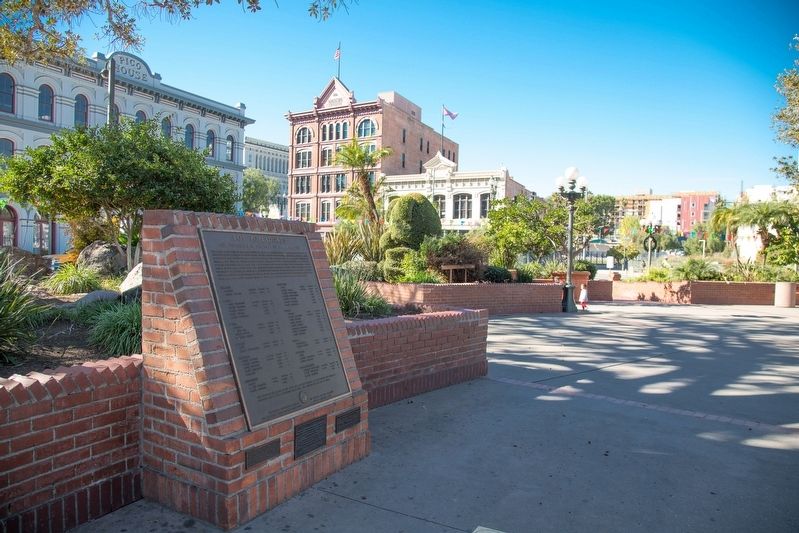 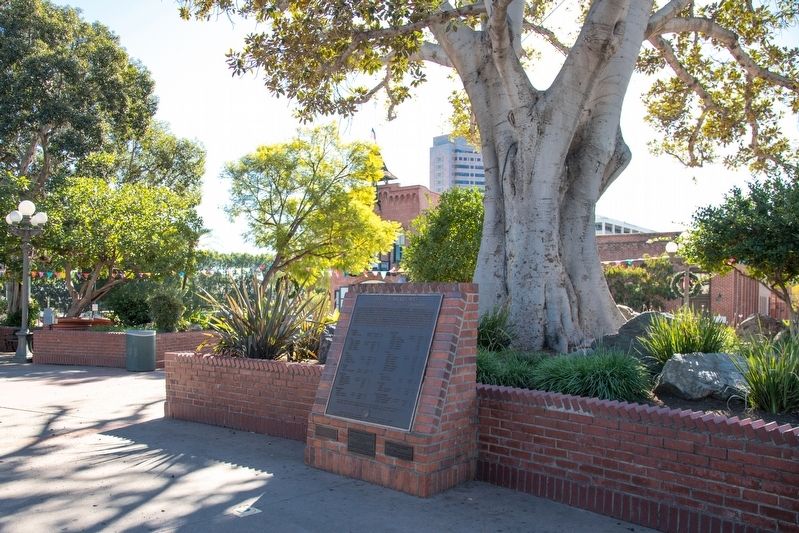 The pobladores ranged in age from one to sixty-seven, and reflected the cultural heritage and racial diversity that link this city’s past to the present.

(small plaque, lower left)
This plaque honoring the forty-four founders of the City of Los Angeles was proposed by Miriam Matthews, member of the Los Angeles 200 Committee, who chaired a special history task force which completed this project for the celebration of the city’s bicentennial. 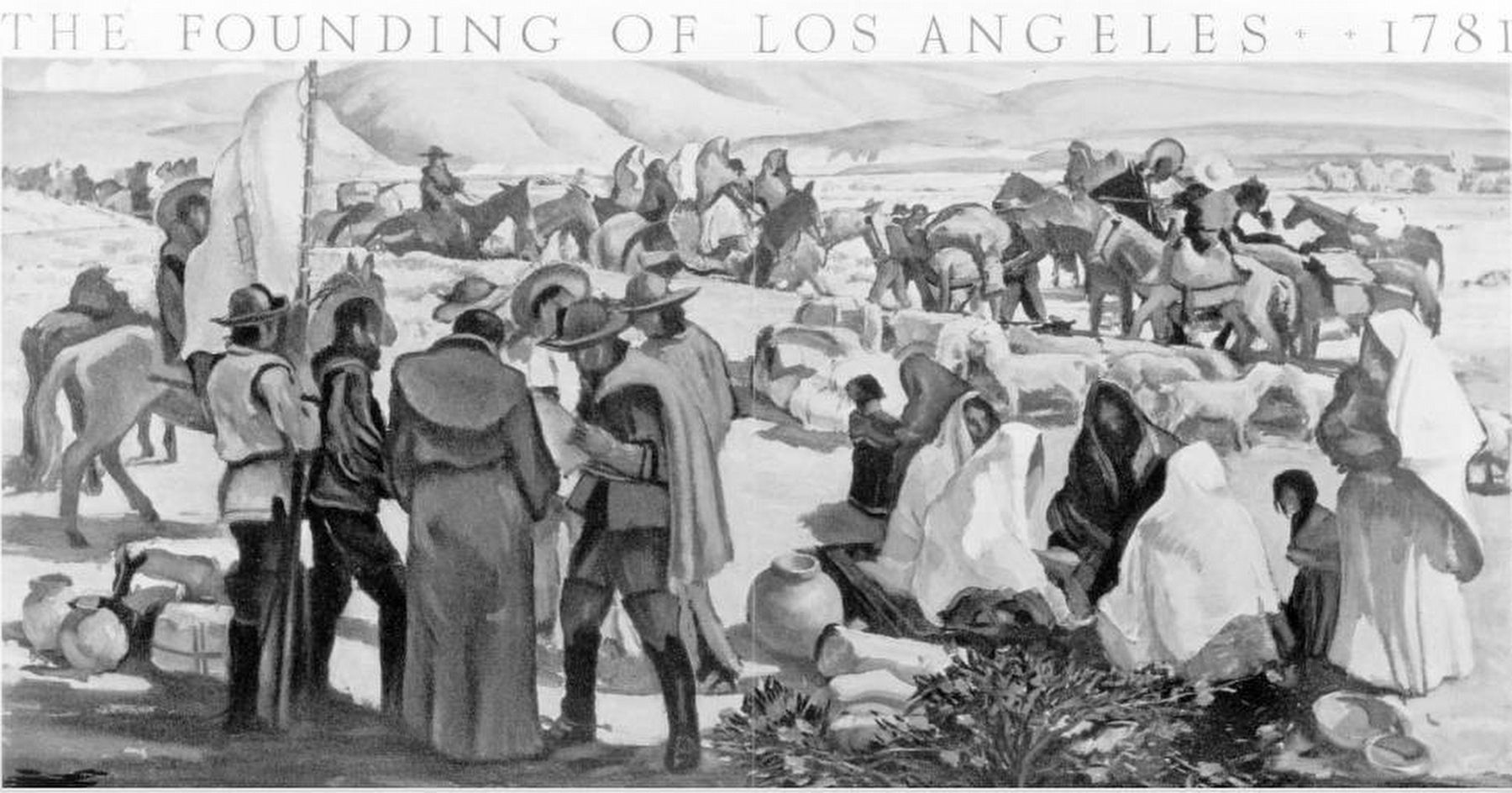 From the California Historical Society Collection at the University of Southern California., circa 1931
4. Mural painting which depicts the founding of Los Angeles photographed by Charles C. Pierce
This black and white reproduction was published in Touring Topics magazine in 1931. The name of the artist and the location of the mural was not given.
Jacinto Cota, español, aged 57; Antonio Cota, español, aged 49; Francisco Salvador Lugo, español, aged 41. Dedicated on September 4, 1990 by Los Pobladores 200, Descendants of the pobladores and soldados.

Related markers. Click here for a list of markers that are related to this marker. Sixteen round brass plaques embedded in 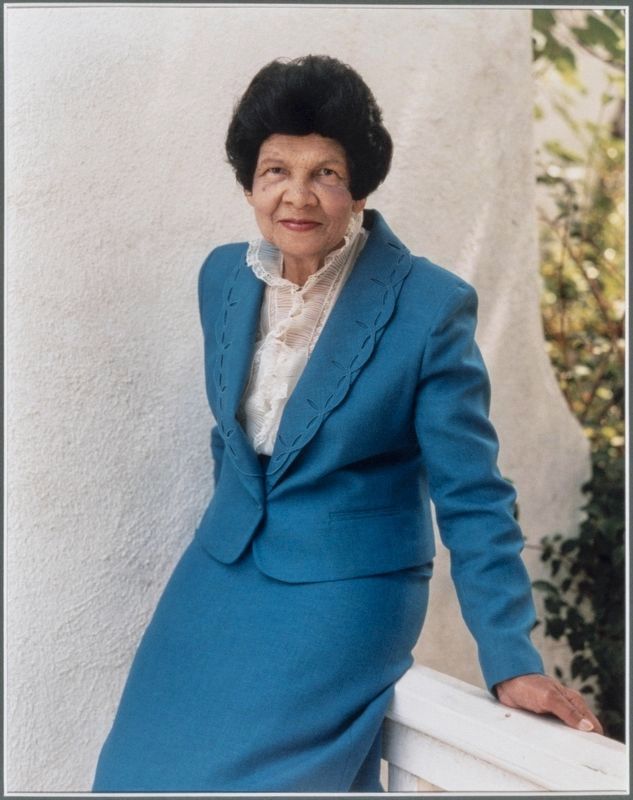 Schlesinger Library, Harvard University. Via Wikipedia Commons, circa 1981
5. Miriam Matthews (1905–2003)
The photographer may have been Judith Sedwick.
the circular sidewalk that surrounds the plaza provide additional detail on the eleven founding families and other information about the founding of Los Angeles

It wasn’t until Miriam Matthews, California’s first credentialed Black librarian, advocated for the pobladores that the city installed another plaque for its bicentennial in 1981, according to the UCLA library. ...

Many people would not know their names if not for the work of Matthews, several researchers argued, dubbing her the Dean of Los Angeles Black History.